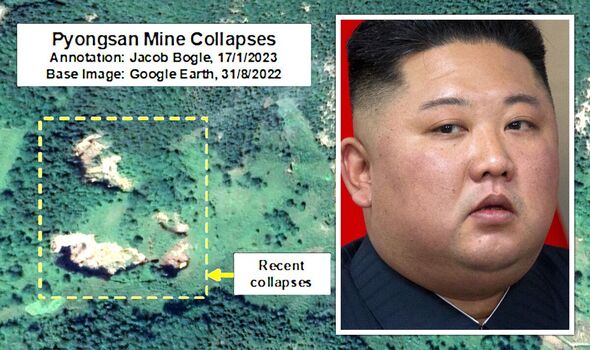 A North Korean uranium mine essential to Kim Jong-un’s push for nuclear weapons has collapsed, with the scale of the disaster visible from space. Jacob Bogle, who created a comprehensive map of the country from satellite photos, discovered the collapse in recent images of the Pyongsan mine. It is the regime’s main source of uranium ore, which can be refined into yellowcake and ultimately weapons-grade uranium.

Located less than a kilometre away from the only operational plant in North Korea that can process the ore into yellowcake, the mine is essential to the production of nuclear weapons.

But recent satellite photos have captured the sudden appearance of large depressions in the earth close to the mine’s entrance, suggesting a collapse.

Mr Bogle said: “The Pyongsan mine is underground, so the only visible aspects of it should be tunnel entrances, surface facilities like crushing equipment, and piles of coal.

“However, what has developed at the mine is a series of irregular pits with no associated activity – no trucks, no bucket excavators, and nothing to suggest they were created to facilitate mining.”

Two such pits, each more than 100 metres across, are clearly visible in satellite photos.

Mr Bogle said: “This area of the mine was already weakened by a 100-metre-wide collapse that occurred at least two decades ago.

“The recent collapses appear to be progressive, moving towards the west in successive cave-ins from 2019 to 2021.

“This suggests that the mined out galleries had lost their structural support and water infiltration has weakened the site further, causing collapses that follow the paths of the galleries.”

But subsequent footage has suggested that despite the collapse, workers are still present at the site, with waste piles continuing to grow while new structures have been built above-ground.

Mr Bogle said: “The mine is still in use and the main tailings pile has grown each year for the last decade, indicating continuous operations.

“And while the satellite imagery can’t tell us if the collapses have caused any injuries, there is an active mine shaft just 230 metres away from the area experiencing the cave-ins.

“In fact, that shaft was refurbished and had additional structures built in recent years to facilitate greater activity.”

Mr Bogle later warned that, while the mining continues, there is an increased risk of further collapses.

He said: “Mining is one of the most dangerous sectors in North Korea. The country lacks modern equipment and isn’t known to use any advanced technologies to determine where mineral veins are, or to locate fissures in the rock that could pose safety risks.

“Timber beams are the most common method used to support the ceilings, but without adequate planning or routine maintenance, the weight of the overlying rock can cause a collapse.”

He added: “Kim Jong-un announced in December that he wants to build ‘exponentially’ more nuclear weapons. To do that, more ore has to be mined from Pyongsan.

“Given the area’s track record, that can only mean even more accidents and cave-ins as greater and greater amounts of material is removed for processing.”

Pyongsan mine is 62 miles southeast of Pyongyang, and less than 30 miles from the South Korean border.

The Kim regime confessed it was extracting uranium from coal there during a visit by International Atomic Energy Agency inspectors in 1992.