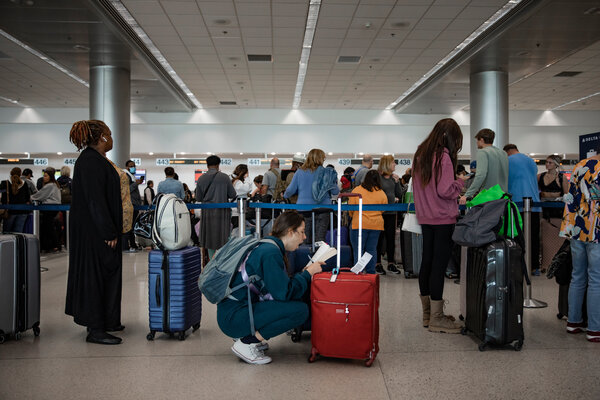 Mr. McGee is the senior fellow for aviation at the American Economic Liberties Project.

On Wednesday morning, the Federal Aviation Administration was forced to reboot its system that alerts pilots to safety issues, grounding all air traffic in the United States. It was the first time since the Sept. 11 attacks that U.S. airspace has been entirely shut down.

Since the late 1970s, this country has not seen its industries as in need of governance, and so has allowed them to flounder and flail. We have neglected to adequately fund or respect our administrative agencies. The airline industry and air transportation system are ground zero for this disastrous governing philosophy, which has endured across multiple presidential administrations, under both Democrats and Republicans.

Much of the rest of the world — Europe, East Asia and the Middle East — uses more sophisticated, accurate and reliable satellite-based systems for tracking air traffic. Here, we are mired in a political fight between airlines and lawmakers over who will pay for the Next Generation Air Transportation System, or NextGen, which is badly needed to modernize our air navigational system‌‌. So NextGen has been adopted in a partial and piecemeal fashion, with a patchwork of overlapping and conflicting flight tracking and safety systems.

This is not just a problem with the F.A.A., but with the entire air transportation network, both the public infrastructure and the private airlines that rely on it. Just a few weeks ago, Southwest Airlines canceled nearly 17,000 flights during the busy holiday travel season as a result of an outdated personnel management system that decades of corporate management had punted on upgrading. This corresponds conservatively to more than two million stranded passengers.

By midsummer, airlines had canceled or delayed more than 100,000 passenger flights, for which, in many cases, airlines had sold tickets despite knowing they would be unable to staff them. This was a result of early retirement incentives offered by the airlines during Covid; despite a taxpayer bailout of $54 billion, the airlines sought to limit labor costs to favor investment compensation even though they were nearly insolvent.

The airlines have no spare capacity, and passenger loads are at record highs, which means that one failure will cascade across the system. Despite having the authority to investigate and fine airlines for unfair and deceptive practices, the Department of Transportation and its subsidiary the F.A.A. have deferred to the private sector for decades, and have done little to rearrange market incentives that lead to these problems.

Our existing political and regulatory system around the airlines likewise does not provide many pathways for addressing these problems. The airlines are not a consistently profitable industry, shown by their need to come hat-in-hand for a bailout at any sign of economic turbulence. Yet it is to the airlines and their executives we often defer for solutions.

The private sector is a core part of the dysfunction. Airlines for America, the industry’s main lobbying group, has consistently stated it supports NextGen in principle but has frequently lobbied against it, arguing it would require investments in upgrading equipment on aircraft. Airlines have been lobbying against the upgrades to F.A.A. satellite-based systems, often wanting to avoid making the capital investments in aircraft that comply with the new system.

Many on the right and in the industry will call for the privatization of the F.A.A. as a result of this outage. But that doesn’t get at the problems we’ve seen in the private sector that are similar, and in many cases, worse. In both the airline industry and the regulators overseeing it, we jump from crisis to crisis without solving any underlying problems. Last summer’s mass cancellations, the Southwest meltdown, numerous other airline IT outages, and now this F.A.A. outage show we need to rethink how we do air travel in the U.S.

The airlines were initially regulated in the 1930s for many reasons, some of which should be familiar to us in 2023: The industry was unable to maintain stable profits, and Americans had grown frustrated with air travel. In 1978, the United States passed the Airline Deregulation Act, phasing out the Civil Aeronautics Board. The C.A.B., while hardly perfect, governed the airlines to ensure that a nationwide air network was maintained, ensured that airlines were earning reasonable profits and able to make necessary capital investments, and set cost-based fares and rules for fair competition.

Under the C.A.B., airline bankruptcies and mergers were rare, flight cancellations and disruptions were rare, airlines never needed nor requested federal bailouts, and the United States maintained a near-universal air transportation network that covered rural and lower-population regions with lower, cost-based airfares. (Nowadays, airfares in rural and smaller markets are the highest in the country.) With none of these things any longer true, and as we endure a never-ending chain of crises, it is clear that the deregulation experiment since 1978 needs to be rethought.

There are many possible paths to take as we begin this conversation. Public governance of our industries has not been an important area of thought for decades, but four law professors recently published an important legal textbook on the mechanics of public utility rules, including airline regulation.

One could envision a wholesale return to the pre-1978 era, with route-setting and price-setting brought back into public hands entirely. My organization, the American Economic Liberties Project, has proposed more F.A.A. funding and  eliminating federal pre-emption, which would allow consumers and state officials to sue airlines over consumer and safety rules. My colleagues and I are, however, eager to take part in a national conversation about regulating the industry more comprehensively.

We haven’t had a national discussion for 44 years about the state of air travel. It’s time to have that discussion, rather than playing Whac-a-Mole with each crisis as it arises. As it stands, we are enduring crisis after crisis in this industry as if it were an act of God that a national transportation system should fail on a regular basis rather than the result of expected and predictable contingencies.

William J. McGee is the senior fellow for aviation at the American Economic Liberties Project and the author of “Attention All Passengers and Half the Child.”