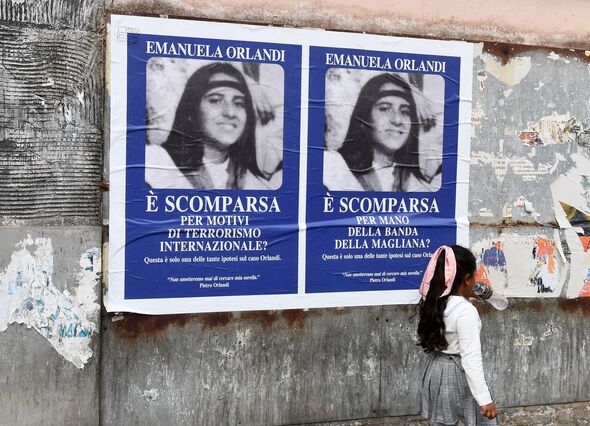 Emanuela Orlandi: Tomb has been reopened once says lawyer

Officials at the Vatican are set to reopen the decades-old case of a missing teenager who disappeared in the Holy city state.

The Holy See is re-examining the mystery of Emanuela Orlandi, the 15-year-old teenager who disappeared in the Vatican forty years ago.

Emanuela’s disappearance caught the interest of producers at streaming channel Netflix, who made the series “The Vatican Girl” released in 2022.

Now, as reported by the Italian news agency Adnkronos, the Vatican is going to reopen the case with the intention of reviewing, one by one, all the files, documents, reports and testimonies it has, with the intention of clearing up the questions and shadows that still hang over the matter.

A source at the Holy See said: “All leads will be re-examined.”

Emanuela Orlandi’s disappearance shocked Italian public opinion in 1983. She was the daughter of an employee of the Apostolic Palace, Ercole Orlandi, and the family lived within Vatican City limits. One evening in late June, after attending music lessons near Piazza Navona, she called home to explain that she was meeting a cosmetics distributor about a possible job offer. She was never seen again.

Posters with her face were plastered all over the city of Rome and the family initially received a lot of contradictory clues that did not provide any information.

A few days later, Pope John Paul II prayed for her at the Angelus and suggested the possibility of a kidnapping, stating that he did not lose “hope in the sense of humanity of those responsible for this case”. On July 5, the Vatican received a call from an alleged kidnapper – nicknamed “the American” because of his accent – offering Emanuela’s release in exchange for John Paul II’s intercession for the freedom of Ali Agca, the Turkish citizen who had attacked him two years earlier.

From then on, the case became more and more complicated, with no conclusive clue that could make or break the option of kidnapping or even whether the young woman was still alive. Her family has never given up the search, despite the different hypotheses that have been put forward.

Among the most plausible testimony is that from a mistress of the leader of the mafia organisation “Banda della Magliana”.

Sabrina Minardi said the mafia boss Enrico de Pedis, who in 2006 admitted to having participated in the kidnapping,  was also involved with the controversial Archbishop Paul Marcinkus, who at the time headed the IOR, the Vatican bank.

According to Minardi, Emanuela was buried in the foundations of a building site.

In 2013, Emanuela’s brother Pietro Orlandi forced a meeting with the newly elected Pope Francis outside a mass in the Vatican parish of Sant’Anna.

Recognising him, the Pontiff told him: “Emanuela is in heaven”. A phrase, which the family interpreted to mean that Francis knew details of the case that had never been revealed, so he redoubled his efforts to find her.

In 2019, the family received an anonymous letter stating that Emanuela was buried in a tomb in the Vatican’s Teutonic cemetery, close to the Santa Marta residence where the Pope lives. Following the family’s request, the Holy See authorised the opening of two graves, in which two German princesses were allegedly buried.

The announcement the Vatican is set to reopen the case came as a surprise to the family, who regretted, in the words of their lawyer, Laura Sgrò, having received the information “once again” through “news agencies without being officially contacted by the Vatican”.

Despite this, the lawyer explained that the family is “happy with the new Vatican investigation”.

Laura Sgrò said: “We filed two complaints, in 2018 and in 2019, but we don’t know on what basis they have reopened the case, as we have learned about it from the press. I think the Orlandi family should have been warned a little earlier.”

Emanuela’s brother, Pietro, welcomed the new investigation. “I am convinced that the truth is there, in the Vatican. I hope to be heard and that there will be full collaboration between Italy and the Holy See”, he added in statements to the Italian press.

DON’T MISS: One dead and two rushed to hospital after horror “e-bike” fire in Merseyside