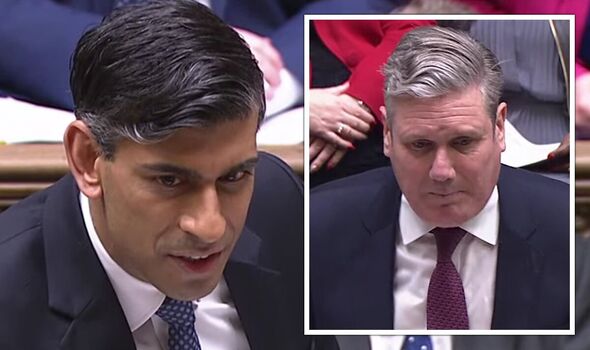 Sir Keir Starmer has been slapped down by Rishi Sunak within minutes of the first Prime Minister’s Questions of 2023. The pair clashed over strikes which have hit the health services with nurses and ambulance staff having staged walk outs.

Sir Keir said if the Prime Minister had negotiated with nurses and ambulance workers they would not be on strike, and accused him of “choosing to prolong misery”.

“So why is he choosing to prolong the misery rather than end these strikes?”

Mr Sunak shot back: “We’ve always been clear that we want to have constructive dialogue with the unions. That is also why when it comes to the issue of pay we have accepted in full the independent recommendations of pay review bodies.

“The honourable gentleman simply doesn’t have a policy when it comes to this question. He talks about wanting to end the strikes. The question for him is simple then: why does he not support our minimum safety legislation?”

“We all know why … it’s because he’s on the side of his union paymasters, not patients.”

The Labour leader also highlighted NHS waiting lists during the debate, accusing the PM of not saying by how much he will reduce them by or when.

Sir Keir said: “So much for the accountability that he wants. As ever with this Prime Minister, you scratch the surface and you find there is nothing there.

“Last month, 1.4 million people waited more than four weeks for a GP appointment. When Labour left government you were guaranteed an appointment in two days. When does the Prime Minister expect to get back to that?”

The Prime Minister said NHS waiting lists were one of his five priorities, adding: “What are his? They seem to change every single week. First he was against NHS outsourcing, now he is apparently in favour of it.”

He described Sir Keir as “inconsistent” and “unprincipled”.