Perhaps no other restaurant has come up with as many ideas that were shoplifted by as many other chefs in as many other cities.Credit…Ditte Isager for The New York Times

Before I went to Noma, Noma came to me.

René Redzepi’s pioneering restaurant in Copenhagen announced Monday that 2024 would be the final year it will be open for regular business, as it transforms itself into a different kind of enterprise, Noma 3.0. Tables for farewell meals at Noma 2.0 will no doubt be next to impossible to book, but that’s been the story for years. I piggybacked on an old colleague’s reservation when I wrote about Noma in 2018, two months after the restaurant assumed its current shape and location.

By that time, though, Noma had already been in New York City for years.

It was here in the one-bite appetizers of reindeer lichen and puffed fish skin, although they weren’t called appetizers, or amuses, either — suddenly they were “snacks.”

Noma was here in the signal-orange berries of wild sea buckthorn that had begun turning up in cocktails, jams, sauces and cheese courses. It was here in the sour, heart-shaped leaves of wood sorrel and other plants that Mr. Redzepi and his cooks picked, snipped and dug up in their search for the building blocks of a strictly regional cuisine following the principles of the New Nordic manifesto. 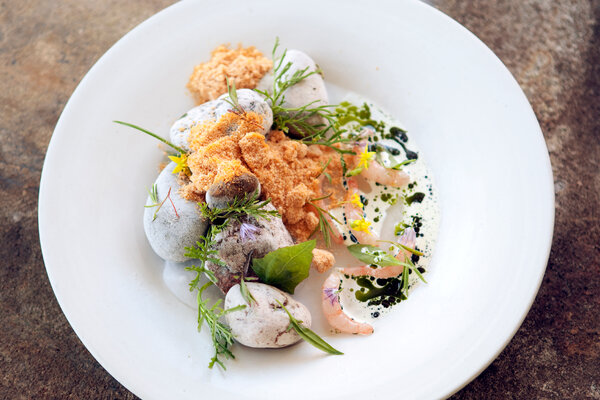 It was here in the burning hay that perfumed individual ingredients and at times entire dining rooms. It was here in the keening acidity of pickled and fermented ingredients served in the early part of the meal, and in the gentle sweetness of parsnips and other vegetables that took the place of fruit in desserts.

It was here in the slates, rocks, seashells, logs and rustic pieces of hand-thrown pottery that had started to replace delicate French porcelain as the preferred objects for transporting food from the kitchen to the table.

It was here in the bony, opaque, angular, off-center, unpredictable, odd-smelling wines made in the Jura and the Loire and elsewhere by natural and biodynamic methods — bottles that had been cult items in France for years but had rocketed to global prominence when Pontus Elofsson, Noma’s first wine director, made them the near-exclusive focus of his list.

These and other Noma-isms began washing up on New York City’s shores not long after 2010, when the restaurant was voted best in the world by a British magazine using a methodology that was itself fairly opaque, off-center and odd-smelling.

Other restaurants — El Bulli, for example, and Chez Panisse — have been widely imitated. But I don’t think any restaurant came up with so many ideas that were shoplifted by so many other places in so many other cities quite so quickly. Noma invented a lot of bits, and they got around. At times these bits could look like mannerisms in search of a manner.

Early on, especially from 2012 to 2015, chefs were copying things Mr. Redzepi did without understanding why he did them in the first place. For a while, when you walked into a brand-new dining room in New York with a modern Scandinavian look, you could predict with confidence that you were not going to be eating any tomatoes that night. The reason? They don’t grow well in Denmark, so Noma doesn’t serve them.

Forming an idea of the real Noma from all these distant echoes, I was like somebody who had never seen Michael Jackson, trying to imagine what his concerts were like based on seeing a subway performer moonwalk.

And then I went to Copenhagen and, by the end of a two- or three-hour lunch, all the Noma-isms fit together like puzzle pieces to form one whole picture. The restaurant that had inspired so many imitators was fluid, it was graceful, it was coherent.

Two things surprised me most. One was how original Noma still seemed, even though I’d essentially been watching its sizzle reel for a decade. The other was how enjoyable it was.

Few of the restaurants influenced by Noma captured this. Each time every available worker ran to the front door to greet an arriving group, I thought, “How corny” — then watched as the newcomers broke out in smiles, the way I had.

Like anyone who has spent more than 10 minutes on Instagram, I knew that the food would be strikingly, painstakingly arranged without looking artificial — a homage to natural forms was the reigning visual motif. Still, I wasn’t prepared for the shimmering beauty of what came to the table, like the iridescent silhouette of a starfish brushed on a plate with edible paint and covered with the sparkling roe of wild Danish trout.

And I discovered the flavors of Noma. Some unprepossessing liquid that looked as if it had simply seeped out of a clam or mussel would turn out to be a sauce full of pleasure and complexity that would come at you in rolling waves. The next course would do it again, but in a different key at another volume. Feats like that, repeated in variations that never become dull, are what make Mr. Redzepi a great chef and not just a sculptor working with materials that go bad after a few days.

I ate that day with Jeff Gordinier, a former Times reporter who was finishing a book about his adventures with Mr. Redzepi (“Hungry: Eating, Road-Tripping and Risking It All With the Greatest Chef in the World”). At the end of lunch we were given a tour of the compound. The fermentation suite was full of jars of grains and yeasts and fruits whose molecules were breaking down and rearranging. The research and development laboratory was ready for new discoveries. The greenhouse was under construction.

Mr. Redzepi explained that the architecture was modular. Any building, any room, could be repurposed in the future. Even the kitchen.

“We’re in here for life,” he told Mr. Gordinier. “But we’re not in here for one thing. It can change.”

I did not guess that Mr. Redzepi would one day decide to reinvent Noma as something other than a restaurant. But I can’t quite say I’ll be sorry when it’s gone, either. In many ways, its excellence had become inseparable from the culture of overkill that now defines the windswept high peaks of fine dining.

The competition to be “the world’s best restaurant” — a meaningless title, but one that has an irresistible pull for chefs and headline writers — has distorted cooking, warped service, inflated check totals, padded menus and stolen hours from customers’ lives and many, many more hours from the lives of chefs and their workers, whether paid or unpaid. Most of the overkill restaurants could not last a week without free labor.

Once he gets rid of those pesky diners, Mr. Redzepi apparently means to focus Noma on research and development of new products that he could sell. Maybe he could ask a small team of scientists to look into ways to shrink great dining experiences, like the one Noma gives its lucky diners, down to a size that is both more human and more humane.