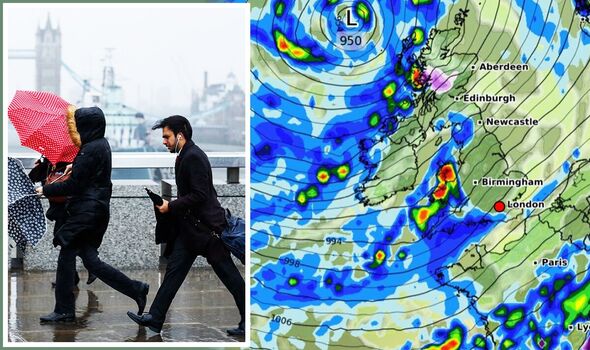 Britons are warned to wrap up falling temperatures through the next couple of days bring a touch of snow to the northern hills.

A massive low-pressure vortex about to wedge itself off the west coast will hurl stormy weather fronts in from the Atlantic.

Met Office meteorologist Aidan McGivern said: “This area of low pressure is a big beast, but it is a slow-moving creature, and it is going to be with us all weekend.

“There will be some heavy downpours thunder and hail but some bright spells in between and coastal gales in the west.

“We are seeing some interesting stuff come our way from Scandinavia, very cold air moves around a huge area of low pressure and comes in from the northwest via Iceland.

“This very cold air moves over warm seas, so there will be a lot of heavy downpours on Sunday especially in the west, and temperatures will be dropping.

“Temperatures on Sunday will be back to average, so less mild but not cold.”

Torrential rain will set in during the early hours of today spelling misery for drivers and others out and about.

A mild start to the weekend will push thermometers to 12C in parts of the country before colder northerly air arrives.

Met Office meteorologist Alex Deakin said: “There is the potential for heavy rain to cause some problems by Saturday morning.

“Cooler air will return, but for most temperatures to start the weekend will be very mild.

“Then the showers really get going for Wales southwest England and southern parts of Scotland.”

Western regions will bear the brunt of the unsettled weather while it turns clearer further east.

Unsettled conditions will blight Britain’s weather into next week as Atlantic low-pressure anchors close by.

Northern regions could see a dusting of snow this weekend as cold, moist air floods in from the north.

A senior meteorologist for the IBM Weather Company said: “On Saturday, early rain will clear to the east with blustery rain showers following to the west and turning to sleet of snow over the mountains.

“It will be rather windy and very mild, with maximum temperatures between 9C to 12C.

“On Sunday, the showers will be frequent in the west and the north with mor sleet or snow over the mountains.”

Jim Dale, meteorologist for British Weather Services, said: “It will feel cold in the north with the windchill as returning Polar maritime air comes into Britain.

“This will have travelled over the sea, so it will pick up moisture and bring the risk of rain through the weekend, although there will be some brighter spells.

“In addition, there is a massive low-pressure system moving close to Britain on Saturday, and again this will bring wet and windy weather.

“While it will feel colder over the weekend, temperatures will move closer to average for the time of year, with the coldest conditions in the north.”