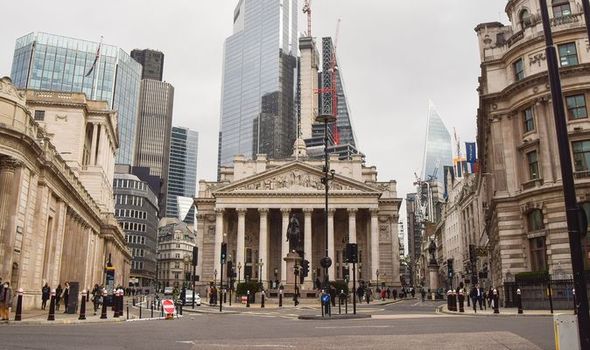 The Chancellor said getting a third dose would help protect the “lives and livelihoods” of millions. His plea comes as the country’s remarkable economic bounceback showed no signs of stalling with the number of payrolled workers rocketing by 257,000 last month. The Office for National Statistics (ONS) said there is “still no sign” that the closing of the furlough support scheme in September has affected the jobs market.

There are now 29.4 million people working in the UK. Unemployment has fallen once more, to 4.2 percent in the three months to October – the lowest rate since spring 2020. The ONS said the number of people employed is now 424,000 or 1.5 percent above levels seen before the pandemic. Vacancies jumped to another record, up 184,700 to 1.22 million between September and November.

But it comes amid fears over the impact to the economy of the highly infectious Omicron variant of coronavirus and new curbs to control Covid-19. All eyes will now be on the Bank of England tomorrow to see if it will hold off on an interest rates rise in light of the latest figures.

Mr Sunak said: “To keep safeguarding our economic recovery and the lives and livelihoods of the British people, I am calling on everyone to keep playing their part and get boosted now.” The data showed redundancies below pre-pandemic levels, contrary to concerns of a wave of job losses once the furlough scheme ended.

Darren Morgan, ONS director of economic statistics, said: “With still no sign of the end of the furlough scheme hitting the number of jobs, the total of employees on payroll continued to grow strongly in November, although it could include people recently made redundant but still working out their notice.

“The number on payrolls is now above pre-pandemic levels right across the country. Survey findings show much of the recent growth in employment has been among part-timers hard hit at the start of the pandemic.”

Economist Samuel Tombs, at Pantheon Macroeconomics, said the data suggested a “painless end to the furlough scheme”. He said the figures would likely have prompted the Bank of England to raise interest rates this week, “if Omicron had not emerged”. He added: “Omicron, however, could hit employment in consumer services, which already has suffered from declining demand.”

The ONS showed unemployment fell 127,000 to 1.4 million in the quarter to October, while employment lifted 149,000 to 32.5 million. Average weekly earnings, excluding bonuses, rose 4.3 per cent in the three months to October, easing back from the 5 per cent between July to September as the data no longer sees workers coming off furlough and a recovery in their pay.

British Chambers of Commerce head of economics, Suren Thiru, said: “Rising payroll employment and falling unemployment confirm the jobs market has continued to rebound strongly despite a slowing recovery and the end of furlough.” But he cautioned the introduction of Plan B Covid restrictions could hinder the bounce back.

He said: “Although labour demand remains robust, Plan B may damage the jobs recovery by squeezing hiring intentions in sectors most exposed to the new measures, including hospitality and retail, by diminishing cashflow and dampening customer demand.”

He added: “While current labour market trends provide no barrier to raising interest rates, uncertainty over the economic impact of the Omicron variant means a December rate hike is unlikely. “Interest rates may start rising from February, but only if concerns over the new variant have faded.

“More support is urgently needed to aid those firms worst affected by Plan B, including returning VAT for hospitality and tourism back to its emergency rate of 5 per cent, reinstating full business rates relief for these firms and making additional grant funding available.”

Professor Len Shackleton, labour market expert at free market think tank the Institute of Economic Affairs, said: “The latest labour market data looks upbeat. However the data relates to a few weeks ago – when we thought vaccination had overcome the worst of the Covid epidemic.

“The threat from restrictions on economic activity following the Omicron outbreak make the prospect for the next few months decidedly more gloomy, especially as the Government is unlikely to be able to support jobs and businesses to the same extent as previous lockdowns.” The latest figures should “not lure us into complacency”, he said, warning that “difficult times are ahead”.