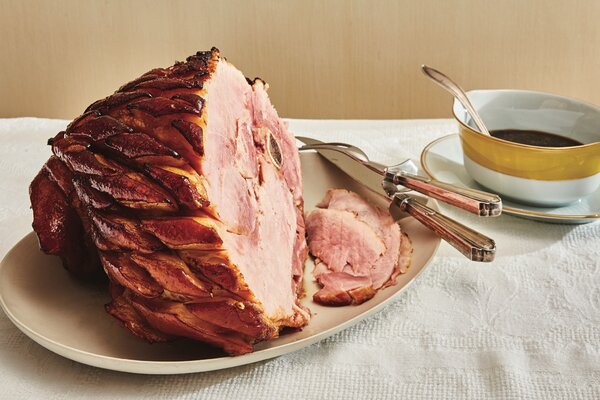 Good morning. I once spent an afternoon reducing a couple of quarts of Cheerwine, the wildly sweet North Carolina cherry cola, to make a kind of demi-glace I thought I could whip with heavy cream, to anoint pecan tartlets after a Southern-style dinner of grilled lamb, grits and braised root vegetables.

This did not work, and I was put off cooking with soda pop for a number of years. (I rebounded with this awesome galbijjim that the chef Peter Cho taught me to make, which requires a can of Coke.) Cooking with liquids that contain high-fructose corn syrup is a difficult business.

But Eric Kim is a remarkable businessman, and his new recipe for root beer ham (above) delivers an incredible result, with the sarsaparilla in the soda imparting a kind of sylvan mintiness to the cured meat. When reduced after cooking the ham, the root beer braising liquid serves as a base for a mustard-rich, syrupy glaze that picks up a high note with a touch of rice vinegar. I suspect he will not be alone in preparing that ham for the holiday season, especially among those who take the time to read his moving essay about developing the recipe in The New York Times Magazine this week.

Indeed, I might try it this weekend, just as practice, if only so I can follow his suggestion to burble up some stock from the hambone and use it for congee, with a few egg yolks stirred in at the end.

What else to make this weekend? Cookies, obviously. This awesome black cake from Trinidad’s “Naparima Girls’” high school cookbook. Maybe some maraschino cherries to give as gifts, or to adorn your holiday manhattans.

And I’d like to assemble Samin Nosrat’s big lasagna for dinner on Sunday, which goes nicely with garlic bread and a Lucali salad. (Would a cannoli cream calzone with honey and orange be overkill for dessert? Not at all.)

Many thousands more recipes to cook this weekend are waiting for you on New York Times Cooking. (Including this one for baked eggs with onions and cheese!) It is an undeniable fact that you need a subscription to access them. Subscriptions are the fuel in our stoves. They allow us to continue doing this work that we love. If you haven’t done so already, I hope that you will subscribe today. (If you’re looking to knock out some holiday shopping, we’re offering gift subscriptions as well.)

And we’ll be standing by, just in case anything goes pear-shaped in your kitchen or our code. Drop us a line at [email protected] and someone will get back to you. (You can also reach out to me, if you’d like to complain or say something kind. I’m at [email protected] I read every letter sent.)

Now, it’s nothing to do with Moxie or Tab, but Sarah Lyall’s Times review of Hervé Le Tellier’s “The Anomaly,” recently translated from French by Adriana Hunter, got me over to the bookstore after work. I’m glad I did that! The novel lies, Sarah wrote, “in that exciting Venn diagram where high entertainment meets serious literature.”

Here’s Rita Chang-Eppig’s short story, “The Miracle Girl,” which the Virginia Quarterly Review awarded the Emily Clark Balch prize for fiction, honoring the best work of fiction published by the magazine in a calendar year.

Finally, Billie Eilish directed and edited the video for her new track, “Male Fantasy.” Watch and listen to that. I’ll see you on Sunday.