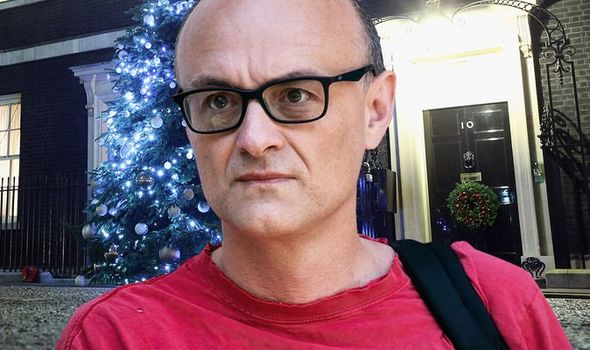 Boris Johnson is facing calls to resign as Prime Minister following accusations Downing Street held a Christmas party last year despite Covid restrictions being in place. Now the former aide to the Prime Minister has issued another explosive bombshell in the probe into the parties.

“Focus shd be actual party in PM’s flat Fri 13/11 reported AT THE TIME but ignored by lobby!”

The Prime Minister is facing increased pressure over allegations of the illegal parties, with ministers extending an independent probe.

Commons speaker Sir Lindsay Hoyle ordered ministers to provide more details on the independent investigation launched to find out if Covid rules were broken after granting an urgent question to the Labour Party.

The Prime Minister committed to an investigation into claims of a party in Downing Street on December 18 last year, amid mounting anger the Government failed to follow its own rules.

Mr Johnson told the Commons the Cabinet Secretary Simon Case would hold an independent investigation to establish the facts.

In a televised press conference last night, he added: “As far as I’m concerned, all the evidence I can see is that people in this building have stayed within the rules.

“If that turns out not to be the case, and people wish to bring allegations to my attention or to the police or whoever, then of course there will be proper sanctions.”

However, the Prime Minister’s announcement left MPs demanding to know more, with claims of further gatherings being held by No10 staff.

He added officials investigating the matter will have access to “all relevant records” and be able to speak to staff.

Mr Ellis also said any findings of criminal behaviour would be passed on to the police.

He told MPs: “As with all internal investigations if, during the course of the work any evidence emerges of behaviour that is potentially a criminal offence, the matter will be referred to the police and the Cabinet Office’s work may be paused.

“I must emphasise that the matters relating to adherence to the law are properly for the police to investigate and the Cabinet Office will liaise with the police as appropriate.

“All ministers, special advisers and civil servants will be expected to cooperate with this investigation.”