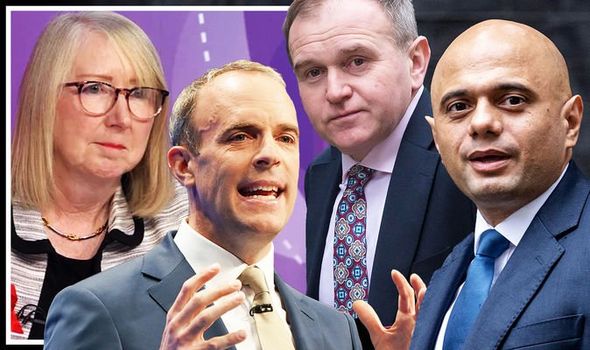 The Health Secretary was due to tour TV and radio studios this morning to make one year since the vaccine rollout.

But after a video leaked last night of Downing Street aides joking about a lockdown breaking party, he has withdrawn at the last minute.

The rehearsal was for plans to hold regular televised US-style press conferences – the idea was later scrapped.

Ms Stratton is seen answering questions on December 22 about a party the previous Friday, the date of the alleged Covid rule-breaking gathering which is said to have been attended by dozens of colleagues while social mixing indoors was banned in London under Tier 3 restrictions.

Mr Javid was due to appear in Radio Four’s Today programme, BBC One, Sky News and Times Radio.

His appearances were cancelled shortly after the video emerged last night, with no replacement Government minister offered up for interview.

Express.co.uk understands No10 has also “pencilled in” a televised coronavirus briefing to mark a year since the first person in the UK received a Covid jab.

It is unlikely the press conference will now go ahead.