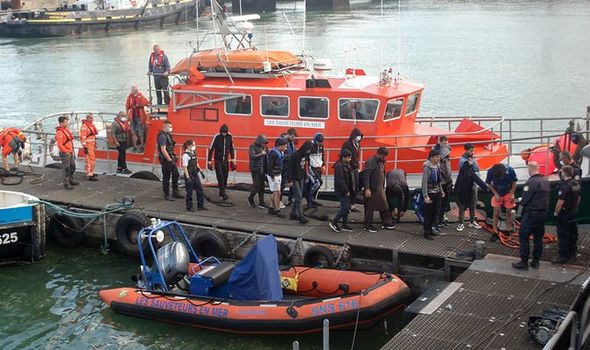 A survey has shown three-quarters of Tory voters believe the Government is too soft on the issue. Tory MPs yesterday warned the Conservatives will lose votes if they do not offer an effective solution. One of the MPs, who said Britain’s current handling of the arrivals “looks like a state failure”, suggested a deal with Paris to allow UK police and Border Force to catch people smugglers and protect asylum seekers.

Craig Mackinlay, Tory MP for South Thanet in Kent, said that British troops could carry out patrols in a bid to quell the record numbers of migrants crossing the sea with the help of people smuggling gangs.

He pointed towards Poland’s plea for international assistance from allies to resolve its own migrant crisis.

Thousands, mainly from the Middle East, have sought to cross into the European Union at the frontier between Poland and Belarus in recent weeks.

More than 24,700 people have arrived in the UK so far this year ‑ almost three times the number in 2020 ‑ after making the Channel crossing in small boats.

It is thought at least 10 migrants have died in the last few weeks while trying to make the dangerous journey.

And officials are said to be concerned there are too few French Gendarmerie nationale, border officers and local police units monitoring the beaches.

Asked whether the issue will cost the Tories votes, Mr Mackinlay told the BBC’s The World This Weekend show: “I feel it will.

“People are asking why our support has softened over the last few weeks across many polls. I knock on a lot of doors, I speak to a lot of people, I have a very full inbox, and I have to tell you this issue is the one that is of most concern to people across my constituency.

“It just looks like state failure. There has to be a solution. We haven’t found it yet, and we’re trying to find the Holy Grail that’s going to stop this.

“Poland has been very receptive to getting international help for strengthening up its Belarus border.”

Health Secretary Sajid Javid said EU countries regularly ignore the Dublin agreement which stipulates migrants should be returned to the country they first arrived at in Europe.

Referring to the 2018 crisis, he said yesterday: “I was home secretary at the time trying to enforce it and almost every country in Europe ignored it.”

Additionally, Mr Javid warned that the pandemic has made returning people “across the world [and] asylum systems much harder”. Hundreds of migrants have continued to cross the English Channel before conditions worsen over winter.

A baby was among about 200 migrants who arrived on the Kent coastline on Saturday. Around 65 people were crammed onto each boat.

Paul Fenney, 40, from Folkestone, said: “I saw three ambulances, three coaches and about 40 police and RNLI boats. The three boats carrying migrants were obviously overloaded. There was a newborn baby that was rushed away with paramedics and its mother.

“We saw 10 little lads, they looked like they were on their own. The majority were men ‑ I only saw that one lady with the very small baby clutched to her chest.”

French officials reported 243 people were recovered and brought to safety at the ports of Boulogne-sur-Mer, Dunkirk and Calais.

The Government is considering processing asylum claims offshore and imposing stricter rules on those waiting to hear if they have been successful.