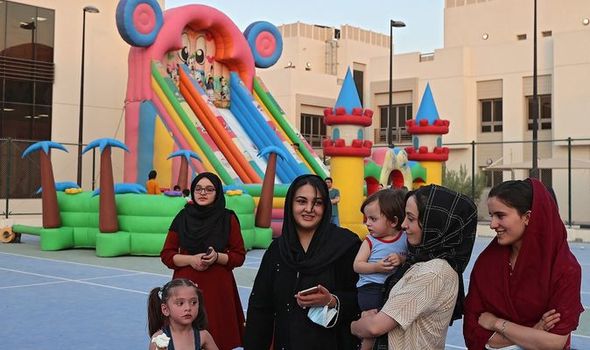 The Qatari Supreme Committee for Delivery and Legacy of the 2022 Fifa World Cup estimates that 2 million fans will travel to the desert kingdom. In the last few years, scores of new massive hotels have sprung up in Doha while a scheme for Qatari families to host fans has been set up. But the country has also ploughed money into building state-of-the-art accommodation for large groups of fans.

One of the fans’ villages just outside the capital city has since August been the first destination for Afghan refugees and other nationals fleeing the country after the Taliban swept back into power in August following Joe Biden’s ill-thought out exit strategy.

The fan village, which has now been designated a camp for “free movement”, has processed more than 75,000 refugees and other nationals including British and Americans who had to leave the country since the summer.

The Qatari government has set up a medical clinic for people staying in the holiday homes as well as a mental health clinic for those suffering from trauma, particularly children.

Jassin Abdelrahmon, a political analyst who is helping run the camp, said: “Many people, especially the children have seen terrible things. They need our help and support in whatever way we can.”

Mr Abdelrahmon said he was moved to help by his Muslim faith and was proud of the service his country had given to those in need. A supermarket has been transformed into a depot bringing in free food, clothes, sanitary products. and other vital items.

The first wave stayed for around two months and all the refugees were then sent to their new countries of residence including Britain. The Qatari government has also made efforts to locate the families of unaccompanied children and teenagers bringing 208 together with their loved ones.

They also provided recreational facilities and encouraged artists and others to express their feelings through creating pictures. This included the Turquoise Mountain group founded by Prince Charles and the President of Afghanistan and there are plans to permanently display the often poignant 80 works created by refugees.

One of the major developments has been the creation of a nursery for children to receive education and support with English the most sort after subject. Sri Lankan Umanga Perera, who recently qualified from Sheffield University, is running the nursery which has become a focal point for families, particularly mothers.

“It is wonderful that the Qataris are doing something like this using their resources to look after those in need for such a worthy cause,” she said. “We have managed to bring a lot of smiles here in the nursery and the families of the children really want to come too.”

Doha was the neutral venue for the talks between the Taliban and Donald Trump’s administration which had aimed for an orderly departure.