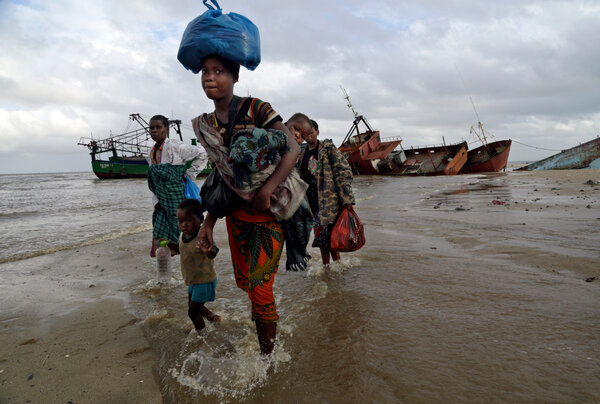 Ms. Sirleaf, a former president of Liberia, was Africa’s first elected female head of state. She won the Nobel Peace Prize in 2011.

How do you tell people that they must leave their community or drown? This was the gut-wrenching decision I faced five years ago, as president of Liberia, when thousands of families in the capital’s largest township saw their homes swept out to sea.

Similar devastation stretches across Africa. Mozambique and Zimbabwe are still struggling to recover from the deadly Cyclone Idai that hit in 2019, and Madagascar is on the brink of famine. As weather patterns become more volatile, irregular rain is common, badly affecting crop and livestock yields. For a continent dependent on agriculture — it accounts for around one-fifth of sub-Saharan Africa’s economic output — the effects of climate change are especially ruinous.

None of this is new. Though the continent has contributed the least to emissions — sub-Saharan African countries, excluding South Africa, account for just 0.55 percent of cumulative CO₂ emissions — Africa has been on the front lines of climate change for decades. Yet leaders in the Global North, preferring to indulge in delay and denial, have done little to help.

COP26, the United Nations climate conference in progress in Glasgow, Scotland, is a chance to change that. For the sake of the planet and particularly for Africa, leaders must seize the moral imperative and commit to decisive action.

The first and most important task is to limit global temperature rises to 1.5 degrees Celsius, or 2.7 degrees Fahrenheit, above preindustrial levels. While progress has been made since the Paris Agreement in 2015, the world is still far off track: According to the United Nations Framework Convention on Climate Change, current national targets would result in 2.7 degrees Celsius of warming by the end of the century. For many countries in Africa and across the Global South, that would be truly catastrophic.

All countries — especially the world’s biggest emitters — must come forward with stronger emission-reduction targets that keep 1.5 in view. Crucially, whatever is agreed on in Glasgow needs to be carried out, with heads of state making it a personal political priority. Not only would that be good in itself, it would also build a precious commodity in the fight against climate change: trust.

That’s been in short supply. Over a decade ago, the world’s wealthy countries made a promise to deliver $100 billion a year in climate financing to developing economies. It still hasn’t been met in full. Yet even if the pledge were honored, the figure — though symbolically important — is insufficient. Many African nations are already spending much more than they receive from the international community to mitigate a crisis they did little to create. Leaders must go much further and agree on a target that accurately reflects developing countries’ needs.