Progressive activists have adopted more aggressive tactics against Senator Kyrsten Sinema and other centrist holdouts as she declined to answer questions and the stakes for President Biden’s agenda have risen. 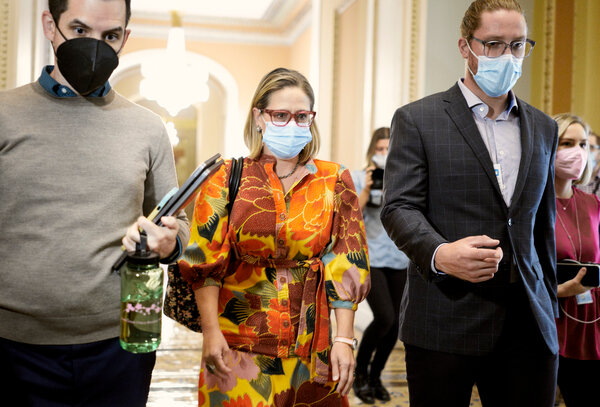 WASHINGTON — In the days after cellphone camera-toting protesters trailed Senator Kyrsten Sinema of Arizona into a university restroom to confront her for opposing parts of President Biden’s agenda, top Senate Democrats drafted a statement of outrage on behalf of their centrist colleague.

“Following someone into a bathroom and filming the encounter is plainly inappropriate, and it crosses a clear line,” the senators wrote. “What happened in that video was a clear violation of Senator Sinema’s privacy that has no place in our public discourse, and we resolutely condemn it.”

But the statement was never released. Senator Bernie Sanders, the progressive independent from Vermont, refused to sign after other Democrats rebuffed his demand that it include a call for Ms. Sinema to embrace Mr. Biden’s multitrillion-dollar social safety net, education, climate and tax plan. The letter organizers then decided against sending out the message of support for a senator who has angered some of her constituents by refusing to meet with them or answer their questions.

The flap, reported earlier by Axios, reflects a broader dispute among Democrats about how to navigate internal divisions over Mr. Biden’s agenda, how aggressively to confront party holdouts standing in the way of his plans, and what the best strategy is for delivering on their promises to their progressive base. It is unfolding at a time of maximum stakes for the president and his party, as they assemble a sprawling domestic policy package that could be their final opportunity to enact crucial priorities and muscle them through Congress while they retain unified control of Washington.

As Mr. Sanders’s demand showed, party leaders share the goals of the protesters who are pressing Ms. Sinema, Senator Joe Manchin III of West Virginia and other conservative-leaning Democrats to drop their resistance to ambitious legislation. But many members of Congress are uncomfortable with the activists’ increasingly bold tactics.

In recent weeks, protesters have paddled kayaks on the Potomac River to confront Mr. Manchin on his yacht docked near the Capitol. Activists chanting “Shame on you, Josh!” have visited the district offices of Representative Josh Gottheimer, Democrat of New Jersey, a leading centrist who has pressed to delay the social policy bill until a bipartisan infrastructure measure can be enacted.