The spiny creatures have destroyed nearly all of California’s kelp forests, what marine biologists call “the lungs of the ocean.”

More than 95 percent of California’s coastal kelp forests have been killed by an explosion of purple sea urchins. Commercial divers like Byron Koehler and Gary Trumper have been hired to help control the purple urchin population.     Credit…Dexter Hake for The New York Times

ALBION, Calif. — A decade ago, when Gary Trumper used to dive for sea urchins, the docks here were packed with commercial fishing vessels. Mr. Trumper and his diving partner, Byron Koehler, would steer through masses of tangled kelp and return after a few hours of work with what Mr. Koehler described as enough red urchin to sink their 26-foot boat.

No longer. Today, more than 95 percent of California’s coastal kelp are gone, devoured by a population explosion of purple sea urchins in the past seven years. This proliferation has led to dead zones known as “urchin barrens,” where carpets of urchins can be seen for miles. One such barren encompasses 400 miles of coastline from Marin County to the Oregon border.

“This bay should be choked off with kelp,” Mr. Trumper said as he gestured over the side of his boat.

The problem has reverberated throughout the international seafood market and created an environmental crisis along the California coast. Fishermen, state officials and now some entrepreneurs are scrambling to slow and even reverse the damage. Among the wide-ranging solutions that have been proposed are aggressive aquaculture programs and the deployment of robotic predators — a sort of Roomba for urchins. 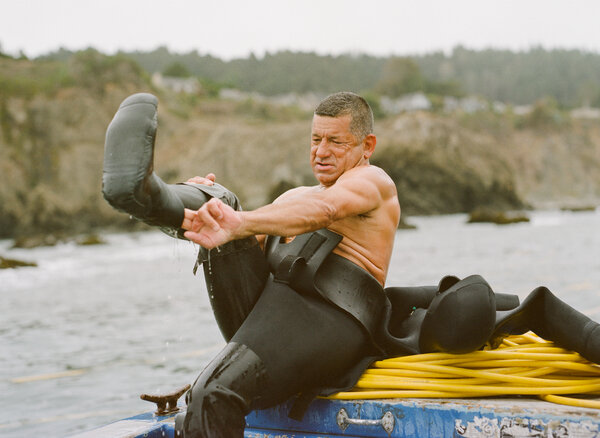 Uni, the delicate meat inside an urchin's spiny shell, is a pricey delicacy. So it might seem that a surplus of urchins would be good business for commercial divers, but Mr. Trumper explained that the opposite is true. The purple urchins off the California coast are mostly inedible because they contain little to no uni. Having overgrazed the coastal kelp and devastated the red urchin population, the purple urchins are now starving. Worse still, they can exist in this state of starvation for decades, lying in wait to gobble up any kelp spores that appear, which prevents kelp forests from growing back.

Mr. Trumper, who is now in his 50s, has been diving since he was 10 with his father, the founder of the commercial fishery Pacific Rim Seafood. “We had so many markets we lost because we couldn’t supply them with product,” he said. Now, he is at a loss for what to do: “It’s the only job I ever had.” Mr. Trumper’s own son, like many other urchin divers in the area, seeks mostly nonfishing work.

This shortage of edible urchins has affected restaurants as well, just as Americans were developing a palate for the delicacy. Uni has long been a staple of Japanese and Italian cuisine, but can be found on plates in places as far-flung as Chile and is increasingly making its way into Californian fare.

Nico Pe​​ña, the chef de cuisine at Octavia, a fine-dining restaurant in San Francisco, says that the urchin available off California’s North Coast “has a beautiful umami flavor with an ocean salinity,” adding that “the texture is super luscious.” He serves it in its dramatic spiny urchin shell with a side of cultured butter and brioche toast.

He first encountered uni while working at the pasta station at Quince, a three-Michelin-starred restaurant across town, where it was cooked down and used to thicken a cream sauce. Uni is incredibly delicate — its melt-in-your-mouth texture is part of its appeal — so less picturesque pieces that have lost their form can be turned into uni butter and used on pasta dishes. Mr. Pe​​ña says he jumps at the chance to add uni to Octavia’s menu because it sells so well and fits with his culinary philosophy of leaning on locally sourced ingredients.

But since July, he’s struggled to source it. “I noticed that there is a lot less than what I was able to get before,” he said, adding that other chefs have had to eliminate uni dishes altogether.

The urchin trouble began in 2014 with “a perfect storm of bad things for kelp,” according to Laura Rogers-Bennett, a research associate at the University of California, Davis and a scientist at the California Department of Fish and Wildlife. There was a major marine heat wave from 2014 to 2016, which was driven by climate change and El Niño weather events.

Simultaneously, sea urchins’ main predator, sunflower sea stars, were wiped out by a sea star wasting syndrome. This created what fishermen and scientists call a “purple carpet,” where the urchins wait in a starving “zombie” state for any sprouts of kelp to grow, thus turning the area into a lifeless urchin barren. And without any uni meat, the urchins are unattractive to other predators like sea otters.

Uni divers like Mr. Trumper and Mr. Koehler were among the first to notice the problem. “They took over the shallows and spread like wildfire,” Mr. Trumper said.

During the 2015 survey season, Ms. Rogers-Bennett said she recalled thinking, “​​Oh my god, there are purple urchins everywhere, and there’s no kelp canopy.”

Kelp forests, commonly referred to by marine biologists as “the lungs of the ocean” because of how they sequester carbon, are essential for a healthy ocean ecosystem. The decline of the California kelp forests sent other marine populations, including red abalone, into such a death spiral that the California Fish and Game Commission closed that abalone fishery in 2017 and announced it would not reopen until at least 2026.

Ms. Rogers-Bennett explained that tackling the problem now, while even a marginal amount of kelp remains, is of the utmost urgency. “If we go down to zero kelps, then trying to restore them is a huge amount of work,” she said. But outcry has been limited mostly to those in the food and conservation sectors. “If 90 percent of the trees in California disappeared,” Ms. Rogers-Bennett said, “then I think people would be much more concerned about the problem.”

The problem has resulted in unlikely partnerships between business interests and conservationists. On a misty morning in late August, Mr. Trumper and Mr. Koehler are not diving for the commercial seafood industry; they’re working for Reef Check, a nonprofit that has partnered with the state government to tackle the problem.

Mr. Trumper and Mr. Koehler are being paid a day rate to pluck every urchin they can from designated zones. The urchins are then brought to Reef Check’s lab where they are analyzed and then used for compost, paving or other purposes. Mr. Trumper explained that these days, working for conservation organizations is the only way they can make a reliable income, but he said even with that, he was earning “just enough money to keep the lights on.” At the end of the day, they collect hundreds of wriggling spiny purple urchins from a designated area smaller than an Olympic-size swimming pool. Their haul fills two large industrial trash cans.

Morgan Murphy-Cannella, a kelp-restoration coordinator at Reef Check who works with Mr. Trumper and Mr. Koehler, said that working with commercial divers is important not just for curtailing the devastating impact on local industries, but also because they know the sea best. “They have thousands of underwater hours,” she said. “They know the reef really well. They’re able to notice patterns.”

So far, their efforts appear to be helping. Mr. Trumper says that kelp is regrowing in the areas where they have pulled urchin. Ms. Murphy-Cannella added that a similar project in Noyo Bay in Mendocino County showed promising results. “This type of restoration works,” she said. But she is far from optimistic. “How do we use this over the bigger scale?” she said. “It’s impossible to clear an entire coastline of urchin.”

Last year, Ms. Rogers-Bennett’s team at U.C. Davis collaborated with a company called Urchinomics, which had been working on similar problems in Norway and Japan. Together, along with the Nature Conservancy, they worked to determine whether their technologies were transferable to California.

They embarked on a yearlong study to see if they could take the starving urchin and make them commercially viable. Urchinomics hired divers to take the starving urchins from the barrens and bring them to aquaculture tanks on land, where they were fed pellets made from scraps of discarded seaweed. Urchinomics’ chief executive, Brian Tsuyoshi Takeda, explained that the choice of feed is incredibly important. “If an urchin is sitting on a dead herring, it will taste like that herring,” he said. “An urchin that’s eating umami-rich kelp essentially tastes like a lot of umami.”

At the end of 12 weeks on this diet, when the urchin shells were cracked in half, there was plump, deep yellow uni inside. The company has begun doing test sales in the United States and is selling to a larger market in Japan. While the commercial aspect appears to be working, Ms. Rogers-Bennett was enthusiastic about the ecological implications. “This is actually better than sustainable,” she said, “because the more you fish it, the better off the kelp forest will be. This is a restorative seafood product.”

When asked what his company would do if they are successful in clearing out barrens off the Southern California coast where they are currently operating, Mr. Tsuyoshi Takeda said that he anticipated no shortage of work. First, they would move up the coast, clearing out the barrens in Northern California and Oregon. And there are urchin barrens all over the world.

Another company, Marauder Robotics, is in the process of developing artificially intelligent underwater predator robots that collect urchins from the seafloor. It is currently conducting experiments in Southern California. In 2018, Dennis Yancey, the company’s chief executive, estimated that one robot could do the work of 75 commercial divers.

Though these kinds of efforts undoubtedly make a dent in the problem, Ms. Murphy-Cannella of Reef Check argues that “the solution is going to be multiple avenues working together.”