None of the 26 women who stood in Qatar’s first ever legislative elections have been chosen by voters.

Around 63.5% of voters turned out to pick 30 members of the 45-seat advisory Shura Council, according to the internal ministry.

But out of 30 positions, no women were selected – despite 26 running amid the 233 candidates standing across 30 districts.

The ruling emir, Sheikh Tamim bin Hamad Al Thani, will appoint the remaining 15 members of the body, which has the power to approve some limited state policies.

Aisha Hamam al-Jasim, a nursing manager who ran in Doha’s Markhiya district, urged women to start “voicing what they believe in” and vote for female candidates in the future.

“To have all men is not the vision of Qatar,” she said. 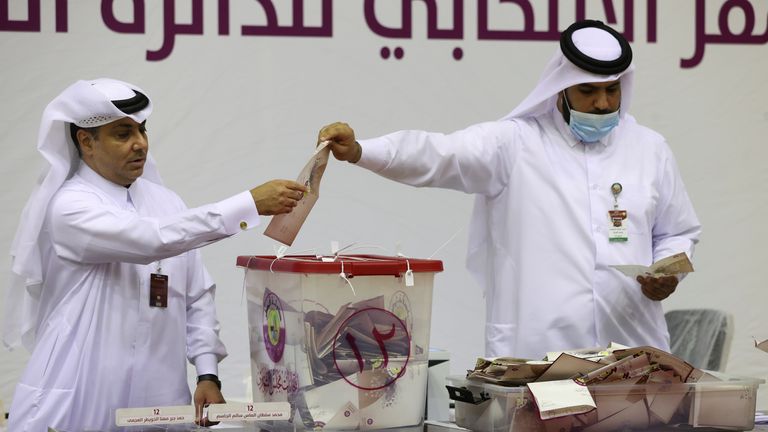 Qatar made some progress on women’s rights in recent years, including allowing women to independently get a driving licence.

But it has been criticised by rights groups for remaining issues like the guardianship system, where a woman needs male permission to marry, travel and access reproductive health care.

Al-Maha al-Majid, a 34-year-old industrial engineer, said she stood in the election to change attitudes towards women.

Speaking ahead of the result, she said: “To convince the males [to vote for women], yes, we may have to put in work or extra effort… I’m willing to take this extra effort in order to be in and to convince this society that the women can do so.”

But the outcome of the elections showed attitudes are still slow to change.

Male candidate Sabaan Al Jassim, 65, said he supported women standing in the elections, but said their primary role remained in the family.

Speaking at a polling station, he said: “They are here, they have their fingerprint, and they have their vote and a voice… But most important is in the house, to take care of the kids with the families.”