Girls in Afghanistan’s junior football team have called on the UK to give them urgent asylum after they fled to Pakistan last month to escape Taliban death threats.

Speaking for the first time about their ordeal, one of the young footballers told Sky News the group has little more than a week left on their Pakistani visas and said she is worried about what might happen to them if forced to return home.

Narges, 18, said she and her teammates are also desperate for the chance to play football again – something that is banned for girls under the Taliban.

“The only thing all of us know is that we don’t want to go back to Afghanistan again,” she said.

Asked if she had a message for the UK government, the teenager added: “If you can accept us we would be really happy that we can live in UK and have the UK as a host country for us.

“The only thing we want from your government and your humanitarian institutions is to find a host country for us in order to help us to be happy again and be alive again, to make a new life and be good football players in the future.” 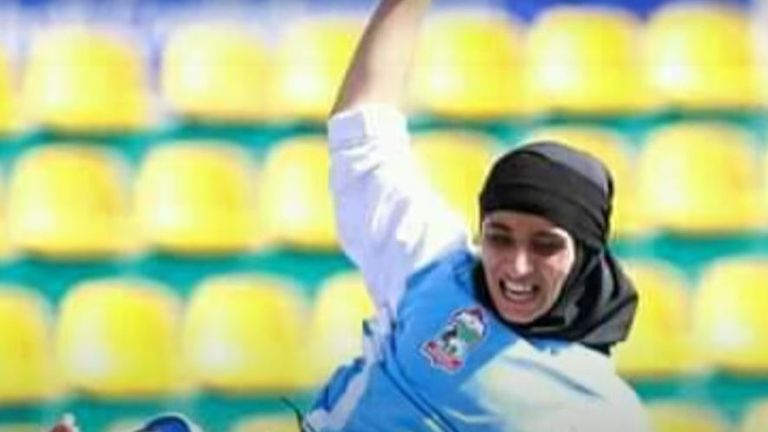 Some 35 young female footballers – many of them members of the junior team, aged 13 to 19 – fled Afghanistan to Pakistan on buses with help from the charitable arm of a UK-based business.

They spent hours stuck on the border, with Taliban guards threatening them and trying to turn them away. Some of the girls were beaten. But they did not give up.

“It was so hard for us,” Narges said.

“The Taliban were violent. They threatened us that: ‘We don’t know who you are but if you cannot pass the border we will kill all of you here’.”

Even when they let the group through, at around 2am, it was still very difficult and emotional.

“That was the last moment that we saw Taliban. We left our country with pain,” Narges said, her voice breaking and tears running down her face.

“It was so hard for us to leave the place where you were born and you grew up.” 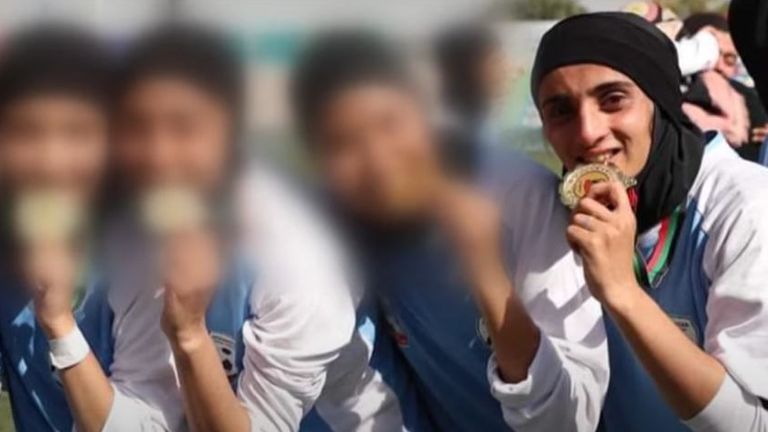 Many of the teenagers and young women were able to travel with their parents and siblings, with a total of 129 players and families now staying at a hotel in Lahore.

But their visas are due to expire on 12 October.

“We are so afraid of this matter,” Narges said.

“Still there isn’t any country to accept us as refugees. We don’t know after these days what would happen to us and what we can do.”

They have received supportive messages from a number of Premier League clubs in the UK, including Leeds United, but need the Home Office to grant them asylum.

Siu-Anne Marie Gill is chief executive of ROKiT Foundation, which is supporting the girls. She urged any country, including the UK, to take them in.

“These girls, who have tremendous courage… can enrich a community,” she said.

“We would love to have the UK government offer them a visa.”

She said she understood there are many people also waiting for asylum and did not want to jump the queue but the threat of the footballers’ visas expiring meant there was a need for urgency.

“They will be taken back to the border if we can’t find a host country to take them on.”

Narges and her teammates just want to be able to play football again, to study and to be safe.

Narges said she developed a love of the sport as a student.

“We were playing football in a backward country like Afghanistan, a country where they don’t believe in women, they have to stay at home,” she said.

“On such a harsh situation we were playing football we love. We really love football. It means freedom for us. When we are together, we feel we are alive.”

But everything changed when the Taliban returned to power in August, preventing many girls from going to school let alone playing sport.

Narges said she had to hide her links to football.

A second footballer, who also spoke to Sky News, said she had to do the same.

At 23, Sabria plays for the national under-23 squad and was also part of the group that escaped Afghanistan.

“Football is my life,” she said, speaking via Zoom, sitting next to Narges, at the hotel.

Asked who their favourite players were, Narges said the Portuguese striker Cristiano Ronaldo, while Sabria picked Spain’s Sergio Ramos, noting that, like him, she was the captain of her team and a defender.

Members of Afghanistan’s female youth team have already managed to gain asylum in Portugal after fleeing their country.

Tags: accept can if US we would You