During a heated Senate hearing, Gen. Mark Milley also defended his actions in the final months of the Trump administration. 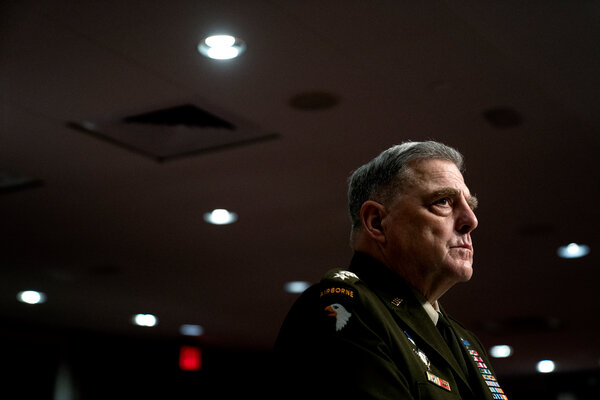 By Helene Cooper and Eric Schmitt

WASHINGTON — Pentagon leaders publicly acknowledged on Tuesday that they advised President Biden not to withdraw all troops from Afghanistan ahead of a chaotic evacuation in which 13 U.S. service members died in a suicide bombing and 10 Afghan civilians were killed in an American drone strike.

During an expansive Senate hearing on the war in Afghanistan, Gen. Mark A. Milley, the chairman of the Joint Chiefs of Staff, also defended his actions in the tumultuous last months of the Trump administration, insisting that calls to his Chinese counterpart and a meeting in which he told generals to alert him if the president tried to launch a nuclear weapon were part of his duties as the country’s top military officer.

General Milley was adamant that he did not go around his former boss. “My loyalty to this nation, its people, and the Constitution hasn’t changed and will never change as long as I have a breath to give,” he said. “I firmly believe in civilian control of the military as a bedrock principle essential to this republic and I am committed to ensuring the military stays clear of domestic politics.”

Some six hours of public testimony from senior Pentagon leaders were at times acrimonious and at times verging on political theater. Republican senators who had in the past defended President Donald J. Trump’s desire to withdraw American troops from Afghanistan demanded resignations from military leaders who carried out a Democratic president’s orders to withdraw. Democrats, who are traditionally tougher on military leaders, on this occasion, provided solace in the form of softer questioning and traced flaws back to the Trump administration.

Under repeated questioning from Republican senators, the Pentagon leaders broke with parts of Mr. Biden’s defense of the pullout, acknowledging that they had recommended leaving 2,500 American troops on the ground, and had warned that the Afghan government and army could collapse as early as the fall if the United States withdrew its forces.

General Milley called the “noncombatant evacuation” in Kabul, Afghanistan’s capital, last month “a logistical success but a strategic failure,” echoing the words of Senator Thom Tillis, Republican of North Carolina, from earlier in the hearing.

Through it all, the burly and brash General Milley, the most senior military official in the country, sat before the Senate Armed Services Committee as both the protagonist and the antagonist for a narrative that changed with each senator. The other two military leaders invited to the hearing — Defense Secretary Lloyd J. Austin III and Gen. Kenneth F. McKenzie Jr., the head of the military’s Central Command — seemed almost like supporting actors at times, as the bulk of the questioning went to General Milley, who has recently been at the center of political turmoil related to revelations in several books about the Trump presidency.

General Milley said that military leaders were able to give their advice to Mr. Biden in the lead-up to the president’s April decision to withdraw. Those views, the general said, had not changed since November, when he recommended that Mr. Trump keep American troops in Afghanistan.

But, the general added, “Decision makers are not required, in any manner, shape or form, to follow that advice.”

Senator Tom Cotton, Republican of Arkansas, asked General Milley why he did not resign after Mr. Biden rejected his advice to keep troops in Afghanistan.