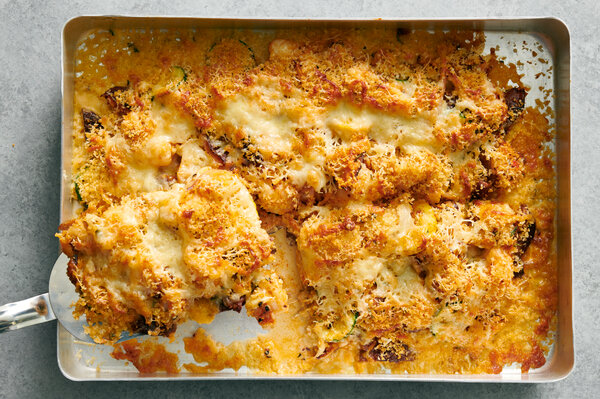 Good morning. There are those who say you should never put cheese on shrimp, but they maybe have never tried the shrimp Parmigiana at Dan Tana’s in Los Angeles or the shrimp tacos at Toloache in New York, both of which are superb. They might wail at Eric Kim’s latest recipe for The Times, for a sheet-pan shrimp gratin (above). They needn’t. It’s a marvelous meal: an exterior of crunch-melty cheese, with a creamy shrimp mixture beneath it that uses shiitakes to add a savory oomph.

I think, whatever your feelings on the subject, that ought to be your dinner tonight. Forget the “rules.” Have some garlic bread and dig in.

Me, I’m going to turn toward one of two options this evening — either this marvelous Sri Lankan dal with coconut and lime-scented kale, or chicken French. I like both in equal measure. Perhaps I’ll flip a coin. Or I’ll make the shrimp gratin again. I don’t run a restaurant, obviously. But that dish sells.

Other dishes I want to cook soon include this lovely focaccia with herbed-honey plums and prosciutto, a savory-sweet snack that I’d love as a light dinner, especially with a ricotta and pine nut salad on the side.

Also, these cheesy kimchi noodles, a hangover helper that’s a wonder even if you don’t need that medicine: instant noodles coated in melted Cheddar and folds of kimchi, finished with a runny egg and a lightly spicy sauce.

And absolutely these enfrijoladas pintos, a superfast (and vegan!) weeknight meal of fried tortillas doused in a sauce made with canned pinto beans and dried chipotle, and topped with pickled red onions.

I could definitely see my way to making baked risotto with greens and peas sometime this week. And I’d like very much to have porchetta pork chops as well, served with colcannon with crispy leeks. Olive oil brownies with sea salt? Them, too.

There are thousands and thousands more recipes to consider for tonight or the coming days on New York Times Cooking. It’s true that you need a subscription to access them. We think we offer fair value: the recipes, of course, but also a recipe box in which to store them, and access to all the notes your fellow subscribers have left describing their successes and substitutions, their own journeys through the work. Please, if you haven’t already, won’t you subscribe today?

And you can always write for help, should you find yourself in a jam in your kitchen or while using our site and apps: cookingcare@nytimes.com. Someone will get back to you. (You can also write to me, if you want to send a rocket, offer praise or make a suggestion: foodeditor@nytimes.com. I can’t respond to everyone, but I read every letter sent.)

Now, it’s nothing to do with goulash or grapes, but I think it’s worth reading David Salle on Janet Malcolm in Artforum, perhaps especially if you read Janet Malcom on David Salle in The New Yorker first.

Have you checked in on Ocearch’s “Shark Tracker” lately?

Is this the week to binge Julie Delpy’s “On the Verge,” on Netflix?

Finally, here are five songs to listen to right now, courtesy of Jon Caramanica, a pop music critic of The Times. Start with Sam Hunt, “23,” Nashville driving music to cook by. I’ll be back on Wednesday.