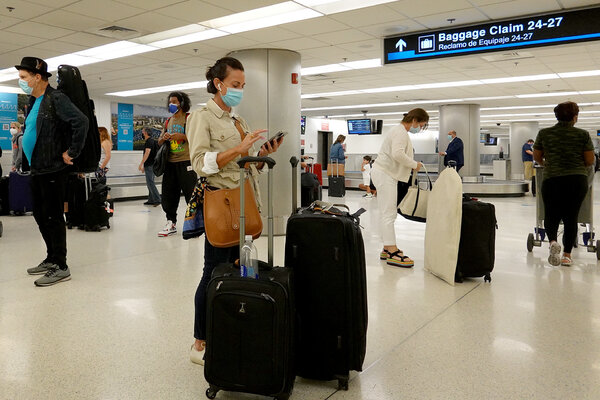 The U.S. lifts its travel ban on unvaccinated visitors

Foreign travelers who provide proof of full vaccination against Covid-19 can enter the U.S. starting in November, easing tensions with Europe and reopening the country to thousands of people, including many who have been separated from family during the pandemic.

Visitors to the U.S. will have to show proof of vaccination before traveling and a negative coronavirus test within three days of arriving. Unvaccinated Americans traveling home from overseas will be subject to stricter testing requirements, and unvaccinated foreigners will be broadly barred from visiting the U.S., even if they are coming from countries that did not previously face restrictions on travel to America.

The end to the 18-month ban on travel from 33 countries, including members of the E.U., China, Iran, South Africa, Brazil and India, could help rejuvenate the struggling tourism industry in the U.S., which suffered a $500 billion loss in travel expenditures in 2020.

Details: The Centers for Disease Control and Prevention will issue an order directing airlines to collect the phone numbers and email addresses of travelers for a new contact-tracing system.

Context: President Biden made the decision to lift the ban while facing pressure from allies frustrated over the travel restrictions, the administration’s haphazard withdrawal from Afghanistan and a diplomatic feud with France.

The Pfizer-BioNTech vaccine has been shown to be safe and highly effective in children ages 5 to 11, the companies announced.

The F.D.A. is likely to authorize Pfizer booster shots this week for Americans over 65 and others at high risk of serious illness.

Covid has reached even the Yamal Peninsula in the Arctic. Vaccination teams have followed, finding ways to inoculate nomadic herders.

Afghanistan’s new government has made it clear that it intends to severely restrict education for girls and women despite the Taliban’s claims that schooling will eventually resume.

When schools reopened on Saturday for grades seven through 12, only male students were told to report for their studies, and girls stayed home. Boys and girls in first through sixth grades have been attending school, with students segregated by gender in the higher three grades.

Men will no longer be permitted to teach girls or women, worsening an already severe teacher shortage. This, combined with constraints in paying teachers’ salaries and the cutoff of international aid, may have “immediate and serious” outcomes for education in Afghanistan, a UNESCO report warned.

Back story: When the Taliban were in charge from 1996 to 2001, they barred women and girls from school. After the U.S.-led invasion toppled Taliban rule, female students began attending schools and universities. By 2018, the female literacy rate in Afghanistan had reached 30 percent.

For Emmanuel Macron, the French president, a debacle over a lost submarine deal with Australia suggests that the NATO alliance is debilitated through lack of trust, writes Roger Cohen, our Paris bureau chief, in this news analysis.

Having recalled France’s ambassadors from Australia and the U.S., France could yet withdraw from NATO’s integrated military command structure. But foreign ministry officials have discounted the possibility, even as its existence suggests the extent to which France feels humiliated. It will not readily forget what it sees as an American slap in the face.

In response, France wants “European strategic autonomy” and “European sovereignty,” favorite phrases of Macron, to become a reality. But in Europe, the affront has largely been met with resounding silence, though Ursula von der Leyen, the European Commission president, told CNN that “one of our member states has been treated in a way that is not acceptable.”

More news from France: Pursuing his attempt to resolve some of France’s most painful colonial legacies, Macron yesterday asked for “forgiveness” on behalf of his country for the abandonment of Algerian Arabs who fought for France in the Algerian war of independence.

News From the U.S.

U.S. troops are still deploying to Iraq, even as the war in Afghanistan ends. About 2,500 American troops remain on the ground in the other nation the U.S. invaded after the Sept. 11 attacks.

Wall Street took its greatest tumble since May, with the S&P 500 closing down 1.7 percent over a number of jitters, including China’s sputtering real estate market and the phasing out of stimulus measures in the U.S.

Democrats vowed to continue their efforts to grant legal status to millions of undocumented immigrants after a top Senate official rejected their bid to include it in their $3.5 trillion social policy bill.

The U.N. General Assembly session will commandeer attention with a lineup of leader speeches starting on Tuesday. Here’s a preview.

Paul Rusesabagina, whose story inspired the movie “Hotel Rwanda,” was sentenced to 25 years in prison after being found guilty of forming and funding a terrorist group. Human rights advocates denounced the case as a sham meant to silence critics of Rwanda’s president.

Voters in Canada have taken to the polls after Justin Trudeau called an election two years ahead of schedule. Preliminary results suggest that he will remain in power even as his party failed to regain a majority.

Haitians deported from the U.S. have been returned to a country in crisis that they barely recognize — often, they say, without a hearing.

NASA has chosen the Nobile crater near the moon’s south pole to seek frozen water that will be essential to future astronaut missions.

Abortions have been legal in Spain since 2010, but many physicians who call themselves “conscientious objectors” refuse to perform them, forcing women to travel long distances to have one.

“The doctors try to convince you that you don’t love your child for wanting an abortion,” said one woman who had to go to another region to end her pregnancy. “It felt like I was doing something clandestine.” In five of Spain’s 17 regions, no public hospital offers abortions.

Your guide to culture this fall

Navigate the new season across the arts world with help from Times critics and writers.

Theater: In the West End of London, adaptations of “Frozen” and “Back to the Future: The Musical” are sure to please fans of the original movies. And here are our picks for this season’s shows on Broadway and beyond.

Pop and jazz: Expect the reunion of disco legends Abba, an intergenerational collaboration between Lady Gaga and Tony Bennett and the arrival of a slate of buzzy newcomers. Here are 66 albums, concerts and festivals to look out for — and, in the meantime, five songs to listen to now.

Classical music: The theater director Wajdi Mouawad makes his Paris Opera debut with George Enescu’s “Oedipe.” In New York, forthcoming highlights include the pianist Daniil Trifonov at Carnegie Hall and Terence Blanchard’s “Fire Shut Up in My Bones” at the Metropolitan Opera, its first work by a Black composer.

Film: Look for would-be blockbusters (“Dune,” “No Time to Die”), art-house hopefuls (“Spencer,” “Flee”) and more in this list of over 125 upcoming movies.

Chicken steam roast is a centerpiece at Pakistani weddings, but it’s also become a dinnertime staple. Here’s how to make it at home.

In “The Book of Form and Emptiness,” Ruth Ozeki’s parable of consumerism, the characters are so preoccupied with material possessions that objects come to life all around them.

How to clean your filthy laptop.

Here’s today’s Mini Crossword, and a clue: Beginning of a joke (five letters).

P.S. Amy Fiscus, The Times’s national security editor and a deputy Washington bureau chief, is joining the team at The Morning newsletter.

The latest episode of “The Daily” is about one family’s desperate fight against the Dixie fire in California.

You can reach Natasha and the team at [email protected].