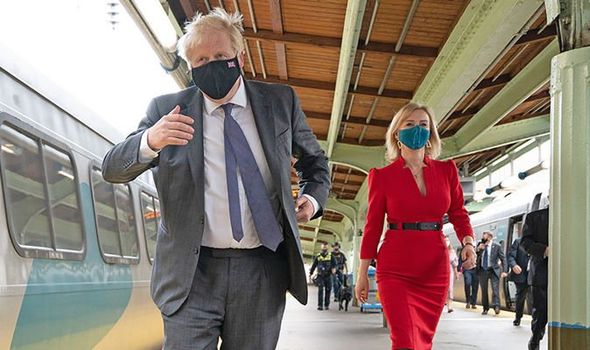 It comes as Boris Johnson and Joe Biden toasted the UK and US’s “special relationship” at the White House last night. The existing trade agreement between the three American countries is already worth at least a trillion dollars.

New Foreign Secretary Liz Truss is understood to be exploring the pact as one of a number of trading options for the UK.

A senior government official said: “There are a variety of different ways to do this. The question is whether the US administration is ready. The ball is in the US’s court. It takes two to tango.”

Ms Truss, who enjoyed an early morning job on New York’s Brooklyn Bridge yesterday, is due to head to Mexico later this week to open a new British Embassy and seek to further trade talks.

A bumper trade deal with India is also said to be in the pipeline, with talks expected to begin this autumn and agreed by as early as next year.

As International Trade Secretary, until her promotion last week, Ms Truss successfully negotiated 68 trade deals worth £744million around the world.

She has also been pushing for the UK to join a free-trade alliance with Asia-Pacific countries ‑ a key part of the Government’s attempts to pivot trade away from Europe after Brexit.

Britain has been in talks to join the Comprehensive and Progressive Agreement for Trans-Pacific Partnership (CPTPP) which will strengthen trade links with the 11 countries in the group, representing a market of 500 million people.

Mr Johnson admitted on Monday he faces an uphill battle to persuade Mr Biden to sign a free-trade deal with the US ‑ saying the President had other “fish to fry”.

He said a number of long-standing trade issues between the two countries had been resolved, such as tariffs on Scotch whisky and the ban on British beef.

But he played down hopes of an imminent trade deal, which was on the cusp of being agreed when Donald Trump left office.

Asked if he would get the deal by 2024, the Prime Minister told Sky News: “We will keep going with free trade deals around the world including in the United States.

“I have plenty of reason to be optimistic about that. But the Americans do negotiate very hard.”

Mr Biden was vice-president when Barack Obama issued his threat to place Britain at the “back of the queue” for a US trade deal if it voted for Brexit.

But Mr Johnson ‑ who was in New York with Ms Truss primarily for the UN’s General Assembly ‑ seems to have got on well with Mr Biden since he became President, with Mr Johnson describing their relationship as “genuinely terrific”.

The PM will try to smooth the path to a separate future trade deal during talks with Congressional leaders in Washington.

Yesterday he became only the second European leader to visit Mr Biden at the White House, following Angela Merkel’s trip in July. He also had talks with Vice-President Kamala Harris at her Washington office.

Ahead of his summit with Mr Biden Mr Johnson described his US counterpart as “a breath of fresh air”.

He told NBC News: “It is the job of any Prime Minister of the UK to have a good relationship with the President of the United States. That applies to Donald Trump. It applies to Joe Biden.

“But what I will say about Joe Biden, dealing with the new American president, yes, it is a breath of fresh air in the sense there are some things on which we can really, really work together.

“He wants to cut CO2. He wants to get to net zero by 2050. And he shares the basic view that you can do this without penalising the economy.”

Mr Johnson also admitted that the withdrawal of British and American troops from Afghanistan could have been handled differently.

Asked whether it was true that he had tried to contact Mr Biden and waited 36 hours for a response, he said: “I don’t discuss my calls with other leaders.”

When asked if Mr Biden had been too “stubborn” over the withdrawal, he said: “America has been there for 20 years and it’s a respectable argument to say that enough is enough. Look, I mean, could we have done it a bit differently? Maybe we could.”

Boris Johnson waded into the Strictly vaccine row yesterday as he insisted “everyone” should get the Covid jab.

Three pro dancers on the BBC show have reportedly refused to have it, leaving some contestants reluctant to dance with them.

The PM told GB News: “Everyone should take their jabs …just because I think it’s a great thing to do.”