We’re covering the Modi government’s pressure on Indian scientists and the armed resistance against Myanmar’s junta. 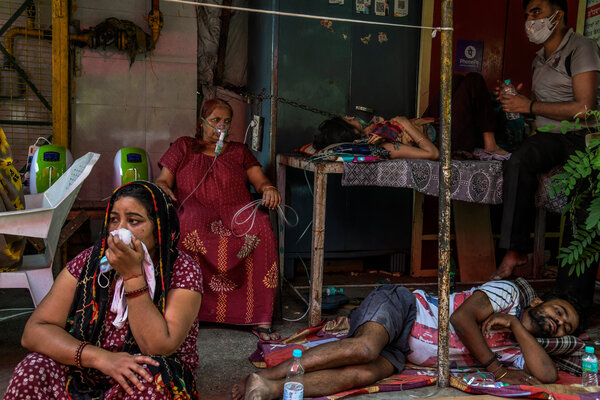 Eight months before a deadly Covid wave struck India, government-appointed scientists downplayed the risks, writing in a study that early lockdowns and previous infections had tamed the spread.

But the country’s top science agency tailored its findings to fit Prime Minister Narendra Modi’s political goals, according to current and former government researchers and documents reviewed by The New York Times.

Senior officials at the Indian Council of Medical Research suppressed data showing the risks, pressured scientists to withdraw another study that called the government’s efforts into question and distanced the agency from a third study that foresaw a second wave, the researchers said.

Agency scientists described a culture of silence. Midlevel researchers worried that they would be passed over for opportunities if they questioned superiors. Anup Agarwal, a physician working for the agency at the time, said he and another scientist were punished for questioning the conclusions.

Response: The science agency declined to answer detailed questions. India’s health ministry did not respond to requests for comment.

Details: A study published in the journal Nature in January 2021 predicted a second wave if restrictions were “lifted without any other mitigations in place.” One of its authors worked for the agency, and leadership pressured him to remove his affiliation from the paper. The second wave struck in April.

Schools in the Philippines are still closed, deepening an education crisis.

President Vladimir Putin of Russia is isolating after several members of his inner circle tested positive for the coronavirus.

Seven months after ousting Myanmar’s elected government, the country’s fearsome army, known as the Tatmadaw, is ramping up attacks on a largely improvised armed resistance, our reporter found.

Escalating attacks on the militias have pushed thousands of people into the forests, some of which are rife with poisonous snakes, malaria and dengue. These people are at high risk for contracting the coronavirus and have little resources, often bringing just a few possessions.

Many prefer these dangers to the junta. Thousands of civilians, some of them young city dwellers more familiar with video games than warfare, have received secret military training. Along with ethnic rebels who have fought the Tatmadaw for decades, they have helped fill the ranks of the People’s Defense Force.

Last week, a few days after a raid on Yay Shin, a village deep in the Himalayan foothills, the National Unity Government — a shadow government set up by opposition politicians — redoubled its call for a “nationwide uprising.” A video they posted on social media was met with enthusiastic support and renewed battle cries from local militias.

Context: The Tatmadaw is continuing the decades-long slaughter it has inflicted on various ethnic minorities. But this time, a far larger part of the population is affected. And some 1,000 protesters and bystanders have been gunned down since the coup.

Alyona Popova is campaigning for a seat in the Duma, Russia’s lower parliament, and imploring women to turn against Vladimir Putin’s ruling party. Domestic violence is at the center of her platform.

A proposal of hers would make all acts of domestic violence subject to criminal penalties. Lawmakers in 2017 voted to lessen punishments for such offenses. There is no legal instrument to issue restraining orders.

“This is our reality; the only term we can use is ‘epidemic,’” said Popova, 38, a lawyer and activist who is running with the liberal Yabloko Party, though she is not a member.

Almost 80 percent of respondents in a 2020 poll conducted by the independent Levada Center said legislation to curb domestic violence was necessary.

Details: Harm that results in bruises or bleeding but not broken bones is punishable by a fine as low as 5,000 rubles, or $68, slightly more than an illegal-parking fee.

Data: According to Popova’s analysis of data collected by Russia’s national statistics agency, there are more than 16.5 million victims of domestic violence every year. More than 12,200 women, or two-thirds of those murdered in Russia from 2011 to 2019, were killed by their partners or relatives, according to one study.

The troubled property giant China Evergrande said on Tuesday that it faced “tremendous” financial pressure and hired restructuring experts, sending its shares lower and increasing concerns about what its fate could mean for the Chinese economy.

Iran could have enough nuclear material for one weapon within roughly a month, potentially pressuring the U.S. to restore the 2015 nuclear deal.

Diplomats from Japan, the U.S. and South Korea met Tuesday in Tokyo and called on North Korea to return to arms talks, The A.P. reported, a day after the country announced it had tested cruise missiles.

Here are the best moments and the outfits from last night’s Met Gala. The theme was “American Independence.”

President Biden will nominate Alvaro Bedoya, a privacy expert and critic of Big Tech, to the Federal Trade Commission.

Climate change could push more than 200 million people out of their homes in the next 30 years, a World Bank report found.

In four years, CNews has become France’s No. 1 news network by giving a bullhorn to conspiracy theories and hard-line views on crime, immigration, climate and Covid. The network, the brainchild of the billionaire Vincent Bolloré, has been compared to the U.S. broadcaster Fox News.

New York Fashion Week came to a close this past weekend. At the Rodarte show on Saturday, tinkling music played as models floated across a sculpture-adorned courtyard in shimmering dresses. It felt like a tribute to the natural world: There were mushroom-printed silk dresses that billowed like parachutes, as well as embroidered flowers, shells and a cape bearing a sequined alien. For the finale, models strolled out barefoot in simple, neutral looks, the last one holding a succulent.

In a review of the week’s final shows, Vanessa Friedman, The Times’s chief fashion critic, wrote about the “growing fault line” between the city’s well-established brands and newer labels with more raw and socially conscious sensibilities.

Many of the week’s highlights came from younger brands, like Peter Do’s debut show, full of finely tailored suits and elegant coats. On a rooftop garden, Collina Strada piled layers of colorful, upcycled materials onto models who ran, skipped and held hands. LaQuan Smith hosted a glitzy show at the Empire State Building where poodles pranced alongside the models.

“The clothes that seemed most relevant spoke not in a generic form of sunny-side-up glamour but in a primal assertion of difference,” Vanessa wrote.

Tortizzas are a quick lunch built on a sturdy base of crispy, cheesy tortillas.

Liane Moriarty — the author of “Big Little Lies” — writes the tale of a missing mother and a tennis pro in “Apples Never Fall.”

In “The Red Studio,” Henri Matisse included tiny versions of his past paintings and sculptures. For the first time, MoMA will show the painting alongside the works it depicts.

P.S. The New York Times for Kids is beta testing an app.

The latest episode of “The Daily” is about a Times investigation into nursing homes.

Sanam Yar wrote the Arts and Ideas section. You can reach Melina and the team at [email protected].