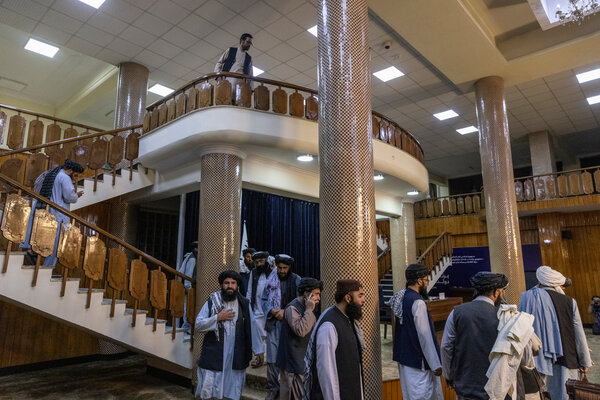 Cascading challenges for the Taliban

A day after the Taliban named an acting cabinet to lead Afghanistan, the dizzying challenges that accompanied the group’s victory were coming into sharp relief, including growing dissent, a humanitarian crisis and foreign policy woes.

Although the Taliban’s announcement of the new leadership was meant to unify the movement and formalize the functioning of the government, the lack of women and the presence of former leaders from the group’s repressive 1990s regime have raised alarms in the West that earlier promises of inclusivity might prove empty.

The Taliban face longstanding tensions on the Afghan-Pakistani border, where some Afghan refugees have fled and where the Pakistani Army has continued to shell suspected militant hide-outs in recent days, according to Taliban and Pakistan officials.

Crackdown: Demonstrators have been subjected to abuse in overcrowded jails. Several Afghan journalists said they were arrested while covering a protest yesterday and beaten in custody. Despite Taliban warnings that protests now had to be approved in advance, demonstrators were back on the streets.

Humanitarian crisis: Food and cash shortages are making it hard to obtain basic supplies. Aid workers who have stayed in Afghanistan, many of them women, are treading a tricky path.

The trial of 20 men accused of involvement in the November 2015 attacks in Paris began yesterday, nearly six years after the coordinated and devastating assault by Islamic State extremists in which 130 people died and nearly 500 others were wounded.

Even as France united in mourning in the wake of the devastation, the attacks instilled deep fears across the country. They came months after deadly shootings at a kosher supermarket and at the offices of Charlie Hebdo, a satirical newspaper, and deepened wounds in French society that have yet to fully heal.

Salah Abdeslam, who prosecutors say is the sole surviving attacker, set a defiant tone in his opening remarks to the judge. “I abandoned all professions to become a fighter for the Islamic State,” he said when asked about his job. All of the other men on trial are accused of being accomplices.

Details: The group will be tried by a panel of judges in a courtroom designed specifically for these monumental proceedings, with space for 550 people. The proceedings are expected to last a record nine months, and it is France’s first trial to be accessible for plaintiffs on live internet audio.

A handful of European countries including Italy, Sweden and the Netherlands have imposed new travel restrictions on visitors from America, after the E.U. removed the U.S. from a list of countries whose residents do not face restrictions such as coronavirus testing or quarantining.

The E.U. suggestion to reimpose restrictions on unvaccinated U.S. travelers is not binding, and many European governments have yet to act on it. Some may even choose to ignore it entirely. For now, most nations, including France, Spain and Germany, still welcome travelers from the U.S. without much hassle.

The countries’ varying measures, which can appear dizzying to non-Europeans, reflect a reality that the pandemic has only amplified: Though the E.U. strives to present a unified front, each of its 27 member countries has its own interests and epidemiological situation.

Divergent outbreaks: More than 83 percent of adults in Belgium have been fully vaccinated against the coronavirus, for instance, but only 20 percent have been inoculated in Bulgaria, which has lately faced a surge of hospitalizations and deaths.

The Palestinian Authority banned weddings, mourning tents and other gatherings to stem a coronavirus outbreak in the occupied West Bank.

The virus is killing pregnant women in Latin America and the Caribbean at high rates, the W.H.O. has warned.

Covax, a program to distribute Covid vaccines globally, cut its 2021 forecast for available doses by a quarter.

More than 17 months into the pandemic, people are leaving jobs without having once seen their colleagues in person.

The Biden administration wants the sun to produce almost half the nation’s electricity by 2050 — in line with what most climate scientists say is needed to stave off the worst effects of global warming.

In Germany, Annalena Baerbock, the Green Party candidate for chancellor, is likely to have a say in the next government, no matter who wins the election this month.

Tropical Storm Mindy has formed in the Gulf of Mexico and is expected to cross the Florida Panhandle, bringing the threat of flooding.

Though abortion is no longer a crime in Mexico, it is not available to most women in the country.

A longtime aide to Vladimir Putin died when he dove off a cliff in Russia’s Far North trying to save a film director who had fallen into the water during an emergency drill, officials said.

Britney Spears’s father, James Spears, filed a petition to end the conservatorship that has controlled her finances and much of her life since 2008.

Off the Gallipoli Peninsula in Turkey, the remains of some two dozen British, French and Australian World War I ships are memorialized in an undersea park established during the pandemic.

A single ’70s shirt or sweater from Malcolm McLaren and Vivienne Westwood’s punk Seditionaries label might sell for $7,000 or $8,000 at auction, providing it was the real deal. But fakes abound, Mark C. O’Flaherty reports for The Times: Fashion archivists describe seeing as many as 500 counterfeit items to one authentic piece.

Welcome to the weird and lucrative world of fake punk. Over the past 30 years, pretend handmade original designs incorporating S-and-M and dirty graphics, innovative cuts and straps, military surplus patterns, tweed and latex — the stuff of the anarchic era that Sid Vicious and his peers made famous — has become a growth industry.

“Pieces are incredibly scarce due to a combination of factors,” said Alexander Fury, the author of “Vivienne Westwood Catwalk.” “They had minute production runs, the clothes were expensive, and people tended to buy them and wear them until they fell apart.”

Read more about anarchy in the punk clothing market.

This vegetarian kofta curry swaps in beans for meat.

Why does coffee sometimes make you tired?

After winning Pulitzers for “The Underground Railroad” and “The Nickel Boys,” Colson Whitehead has taken a detour with a new crime novel, “Harlem Shuffle.”

That’s it for today’s briefing. See you tomorrow. — Natasha

Ellen Pollock, The Times’s Business editor, was honored with the lifetime achievement award in this year’s Gerald Loeb Awards for Distinguished Business and Financial Journalism.

The latest episode of “The Daily” is about the Delta variant’s path through the U.S.