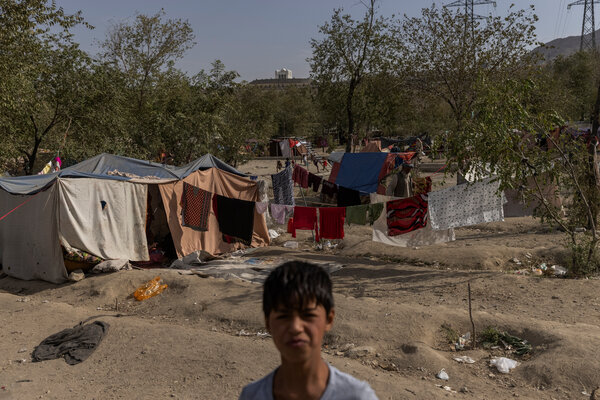 The U.S. winds down Afghanistan airlift

A U.S. drone strike in Kabul yesterday blew up a vehicle laden with explosives that officials said was an “imminent ISIS-K threat” to the airport, three days after a bombing killed about 170 civilians and 13 American service members. Afghans said that the drone strike killed a number of civilians, including children.

With President Biden’s Tuesday deadline for withdrawing troops fast approaching, the U.S. is shifting its focus from evacuating civilians to bringing military personnel home. About 300 American citizens remain in Afghanistan. The U.S.-led coalition has told Afghans awaiting transport out of the country that for them, the airlift is over.

Though the Taliban has reportedly assured the U.S. and 97 other countries that Afghans with appropriate travel documents will be permitted to leave after U.S. troops depart, the insurgents have reneged on promises in the past, and their leaders have not always been able to control fighters and followers on the ground.

Refugees: Nearly 100 countries have pledged to accept Afghan refugees. But for the tens of thousands who have fled and are now in limbo in overflowing processing centers, an uncertain future awaits.

Analysis: Biden has insisted that he had no choice but to withdraw under the deal he inherited from Donald Trump. But were there other options?

First person: “I knew — everyone here knew — that an era of hope, however uneven and misplaced, was about to end,” wrote Mujib Mashal, my colleague who grew up in Kabul, on the final days of life in the Afghan capital without the Taliban.

Hurricane Ida battered Louisiana yesterday, delivering an onslaught of harsh winds, floodwaters and power outages in one of the region’s most devastating storms since Hurricane Katrina hit in 2005. Here are live updates and a map tracking the storm’s path.

Ida’s storm surge is expected to be less severe than Katrina’s, but its winds and rain are predicted to be stronger. Officials said it was too late to evacuate and urged residents to hunker down.

Hospitals: During Katrina, the city’s hospitals were overwhelmed by water and patients. Now, they are already strained by the resurgence of the coronavirus pandemic.

Climate: Ida intensified quickly, in part because of unusually warm surface temperatures in the Atlantic Ocean. The Atlantic hurricane season of 2020 was the busiest on record, and Louisiana is still struggling to recover from two hurricanes that followed a nearly identical path that year.

E.U. to reintroduce travel restrictions on the U.S.

The E.U. today will remove the U.S. from a “safe list” of countries whose residents can travel to the 27-nation bloc without quarantine or testing restrictions, after coronavirus infections and hospitalizations surged in the country in recent weeks.

Member countries will be advised to reintroduce restrictions on U.S. visitors, which are not mandatory. Most European nations reopened their borders to Americans in June, hoping that American tourism would help the industry bounce back. The U.S. did not follow suit, drawing anger from Europeans and their leaders.

Details: Other countries expected to be removed from the safe list include Israel, Kosovo, Lebanon, Montenegro and North Macedonia.

By the numbers: The E.U. “safe list” necessitates having fewer than 75 new cases daily per 100,000 people over the previous 14 days — an infection rate far below that of the U.S. Some 64 percent of E.U. residents have received at least one dose of a vaccine, compared with 60 percent in the U.S.

Disinformation and conspiracy theories have led to widespread vaccine hesitancy in Palestinian territories.

Israel extended its booster shot campaign to all citizens age 12 and above amid a surge of infections linked to the Delta variant.

A large study found that people were at substantially higher risk of blood clots from coronavirus infections than from vaccines against Covid-19.

After a surge in cases, Italy will impose tighter restrictions on Sicily.

President Biden yesterday met with the families of 13 U.S. service members killed in a bombing last week in Kabul, Afghanistan.

In the U.S., dental benefits may be added to Medicare for the first time.

For Wall Street and those who study economic data, trouble is around every corner even as the economy booms.

A puppet of a 9-year-old Syrian girl has been traveling across Greece and Turkey to highlight the plight of refugees. But some have objected, saying it could encourage more migrants to go to countries unable to support them.

Limestone slabs recovered in a 2013 police raid in Brazil have revealed the most complete fossil of a species of pterosaur ever found.

A video of abuse levied against a dying Indigenous woman in a hospital in Canada has prompted outrage and has underlined systemic discrimination.

The French authorities have tried to outlaw hardy American hybrid grapevines for 87 years. But climate change and the natural wine movement are giving renegade winemakers a lift. Above, a winemaker examines some Clinton vines, a grape variety banned in France since 1934.

“France is a great wine country,” said one winemaker. “To remain one, we have to open up. We can’t get stuck on what we already know.”

Sally Rooney’s first two books, “Conversations With Friends” and “Normal People,” made her more famous than she liked. For her latest, “Beautiful World, Where Are You,” which comes out on Sept. 7, she asked herself what a novel is and why she’s taking on another one, reports Lauren Christensen.

Since the release of her 2017 debut, “Conversations With Friends,” and her Booker Prize-longlisted “Normal People” in 2018, Rooney, 30, has become the kind of best-selling author whose popularity somehow eclipses the books themselves, her name an easy shorthand for a certain cultural sensibility, even to those who haven’t read a word she’s written.

Her first two novels, both written in her 20s, had all but poured out of her. “Off the top of my head is a bad way of putting it,” she said, “but I wasn’t thinking, What is a voice? What is a protagonist? It was so natural, all those questions just answered themselves as I wrote.”

By the time she got to New York in 2019, to take part in a fellowship at the New York Public Library, the pressures had accumulated, and she worried she would never write again. “Wait, how do you write one of these?” she’d asked herself. “It was like I’d never done it before!”

“All Hands on Deck,” an exuberant French comedy set in the mountains, is among our latest picks for the best international films to stream.

P.S. Take a peek into our deserted newsroom.

The latest episode of “The Daily” is about the deadly bombings in Afghanistan.