Americans have described a necessary, if distasteful, working arrangement as they race to evacuate Afghanistan by Aug. 31. 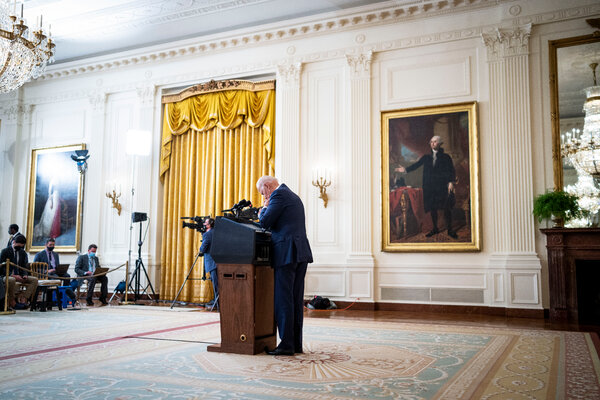 WASHINGTON — Two decades ago, President George W. Bush denounced the Taliban for “aiding and abetting murder” after the terrorist attacks of Sept. 11, 2001.

Now, as President Biden ends the war Mr. Bush started, the United States is locked in an uneasy partnership with that very enemy force, relying on the Taliban to help safeguard American citizens and their Afghan allies as they race to evacuate the country.

It is an improbable battlefield relationship: Diplomats, spies and military officials for the United States are having cooperative discussions with their Taliban counterparts, as the group serves as America’s first line of defense at the airport in Kabul, the Afghan capital, screening passengers for documents and weapons.

That relationship appears to have failed spectacularly on Thursday, American military officials said, when rival terrorists managed to pass through Taliban checkpoints around the airport and set off a suicide bomb that killed 13 American troops and scores of Afghan civilians.

The grim incident — and the warnings by administration officials that more attacks are possible, even likely, in the days ahead — underscores the precarious position that Mr. Biden finds himself in after overruling his military advisers in the spring and ordering a total withdrawal of American forces from Afghanistan by the end of August.

Mr. Biden has received broad criticism for his handling of the withdrawal, even from many Democrats. Republicans who eagerly supported former President Donald J. Trump’s months of negotiations with the Taliban are now savaging Mr. Biden for leaning on the new rulers of the country. But once the Taliban toppled the Afghan government on Aug. 15, the imperative was set, according to Mr. Biden and his top generals. During the last 10 days, they have described a necessary, if distasteful, working arrangement.

“No one trusts them,” Mr. Biden said Thursday evening as he denounced the terrorist attack by ISIS-K, an Islamic State affiliate and a rival to the Taliban. “We’re just counting on their self-interest to continue to generate their activities. And it’s in their self-interest that we leave when we said and that we get as many people out as we can.”

Contact between the United States and the Taliban, the enemy in a war that took the lives of more than 2,400 American troops, is not unprecedented.

Former President Barack Obama approved talks with the Taliban in 2010 to free Sgt. Bowe Bergdahl, an American soldier who was captured by the group the year before.

During the Trump administration, the United States sought direct peace talks with the Taliban in hopes of ending the conflict. Zalmay Khalilzad, an Afghan-born former U.S. ambassador to Afghanistan, Iraq and the United Nations, was brought in to lead the negotiations, which slogged on for nearly two years in the Qatari capital, Doha.