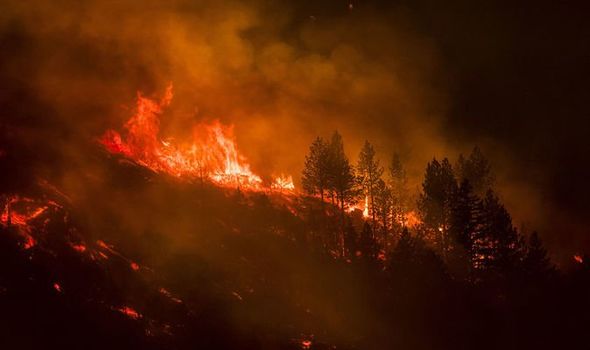 The National Hurricane Centre also warned of storm surges ‑ when sea waters are pushed up to five feet above their normal level.

Around 400 flights were cancelled and some rail services cut or suspended. Roads and subways were deluged, leaving drivers ploughing through deep water.

Andrew Cuomo, in his final days as New York Governor, said it was “as serious as a heart attack” and urged residents in Long Island to get to higher ground.

The city’s “We Love NYC” concert to mark the end of the Covid pandemic was dramatically halted as thunderstorms struck.

The event ‑ with headliners Paul Simon, Bruce Springsteen, and Jennifer Hudson ‑ was entertaining a 60,000-strong crowd.

But as Barry Manilow was performing his classic hit I Can’t Smile Without You just after 7.40pm, the plug was pulled. The singer said: “They threw us off the stage because they were afraid of lightning. It was getting very dangerous out there.”

At least 500 National Guard troops were set to be deployed yesterday while the State Police had 1,000 staff on duty. Governors in neighbouring Massachusetts and Connecticut also called in the National Guard to help deal with the rescue effort and clean-up operation.

Flash flooding also killed 10 people in the southern state of Tennessee on Saturday.

The Dixie Fire, the second biggest on record, has already wiped out the historic town of Greenville and now threatens thousands of homes north-east of San Francisco.

Bill Deverell, a history professor at University of Southern California, said: “The suggestion of patterns across the last two decades in the West is deeply unsettling: hotter, bigger, more fires.”

Get the latest three-day weather forecast where you live. Find out by adding your postcode or visit InYourArea