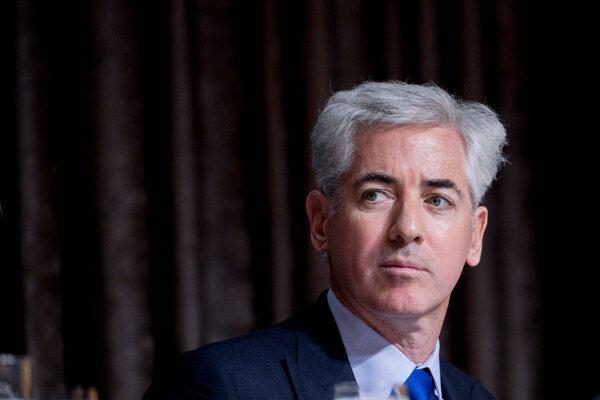 Ackman’s SPAC deal gets even messier

Bill Ackman, the billionaire hedge fund manager, is pivoting again to try to save Pershing Square Tontine Holdings, his $4 billion special purpose acquisition company, which has faced a series of setbacks since it launched a year ago. In a letter to investors posted late last night, he proposed a radical rethink that could lead to the SPAC shutting down, returning its cash to investors and being reborn in a new guise.

To recap, Ackman’s SPAC, the largest of its kind, promoted many investor-friendly features, like tying the sponsor’s pay more closely to post-merger performance. But when he announced he had identified a deal, a complex transaction that involved buying a minority stake in Universal Music while spinning out two other blank-check vehicles, regulators balked, and the plan was scrapped last month. This week, the SPAC was hit with a lawsuit that challenged the fundamental structure of the SPAC, prompting Ackman’s letter.

“The mere existence of the litigation may deter potential merger partners” from engaging with the SPAC, Ackman wrote. The appeals process could drag on, and the SPAC has only 11 months left to announce a deal.

Ackman suggested that his SPAC was a stand-in for a broader campaign by academics and lawyers against all blank-check firms, which have boomed over the past year. “The two law professors who concocted the legal theory behind the complaint conceded to the press that their motivation in bringing the lawsuit was ‘to reform’ the entire SPAC industry,” he wrote.

“All is not lost, however,” Ackman said. He proposed replacing his SPAC with a new blank-check vehicle called a SPARC, which he first proposed as part of the aborted Universal Music deal. If the SPARC is approved by the S.E.C. and the N.Y.S.E., which Ackman said he was in talks with, investors in the SPAC will get their money back at the $20-per-share I.P.O. price and warrants to buy into the SPARC.

What’s a SPARC again? In a SPAC, investors buy shares in a public shell company formed to make an acquisition within a two-year time frame. In a SPARC, investors don’t put in money up front, and instead receive a right (the “R” in SPARC) to buy in once the vehicle announces a merger target, which isn’t subject to any time limits.

Some investors aren’t convinced. Those who bought when Ackman’s SPAC was trading above its I.P.O. price would have a loss crystallized by being forced to take cash at the offer price. Some are taking to social media to vent their frustrations with Ackman, with plenty of colorful language. Time will tell if the accompanying right to buy into the SPARC is worth it, if it ever comes to that.

Johnson & Johnson’s longtime C.E.O. is stepping down. Alex Gorsky will be replaced by his deputy Joaquin Duato at the beginning of next year, and Gorsky will remain at the company as executive chairman. J&J’s stock has nearly tripled since Gorsky took over in 2012, but he leaves at a tumultuous time for the company, which suffered production problems for its coronavirus vaccine and legal troubles over opioids and talc in its baby powder.

Toyota slashes output because of a shortage of computer chips. The world’s largest automaker said it would cut global production by 40 percent next month, reducing output by about 140,000 cars and trucks. The auto industry had been expecting conditions to improve, but Toyota’s announcement suggests that shortages could persist.

Cutting off extra jobless benefits early didn’t help the economy. Many states have moved to end expanded unemployment benefits early, arguing that it would push people back to work. New research suggests that this led some people to find jobs, but far more remained unemployed and were forced to reduce their spending.

The goal posts keep moving for companies’ return-to-office plans. Fearing the spread of the Delta variant of the coronavirus, IBM temporarily closed its New York City offices to all but essential staff. PwC delayed the reopening of its U.S. offices until November, at the earliest. Apple and Charles Schwab pushed back plans for their employees to return to the office to next year.

OnlyFans, an online platform known for explicit material, is banning sex videos. The company, which will still allow creators to post nudes, said it was changing its content strategy to make it more inclusive. Observers said the site’s pornographic material had turned away investors.

The Federal Trade Commission filed an amended complaint yesterday against Facebook, bolstering its case that the tech giant acquired WhatsApp and Instagram to create a “moat” around its illegal monopoly of the market for “personal social networking.” A judge had dismissed the original case but allowed the agency to try again, saying it needed to define Facebook’s market more clearly.

The F.T.C. bulked up on numbers. Previously, it said Facebook monopolized its core market with a share “in excess of 60 percent.” This time, it got more granular, citing a few different measures it said demonstrated Facebook’s outsize power over personal social networking: Over the past decade, users spent more than 80 percent of their time on these networks on one of Facebook’s platforms, and 70 percent of all social networking users on a given day visited one of Facebook’s sites.

The F.T.C. also laid out the competitive landscape, saying that Facebook’s biggest competitor is Snapchat, which is “a fraction of the size” of Facebook and Instagram. Companies like LinkedIn, Pinterest, Reddit, TikTok, Twitter and YouTube aren’t part of its market, the F.T.C. said, because they aren’t focused on personal social connections, making the claims about Facebook’s domination all the more stark.

Facebook has until October to respond. In a statement, Facebook said that “there was no valid claim that Facebook was a monopolist — and that has not changed.”

Lina Khan refused to recuse. Facebook had asked the F.T.C. for the chair to recuse herself from the case, saying that her track record of vociferous opposition to Big Tech made fairness impossible. The agency dismissed the request. Bill Kovacic, a former F.T.C. chair, said the battles ahead would most likely be fierce — the F.T.C. has won fewer than 20 monopoly cases in an appeals court since the agency’s inception more than 100 years ago.

As cryptocurrency businesses seek legitimacy, many are following the same playbook: They hire former government officials. But while bringing them onboard is one thing, keeping them around is another.

Government types and crypto executives might not align. The world’s biggest cryptocurrency exchange, Binance, has made hiring former regulators central to its efforts to burnish its reputation. In April, its American subsidiary, Binance.US, hired the former acting comptroller of the currency, Brian Brooks, as C.E.O. At the time, he told DealBook that “managing reputation” among regulators was a priority. But Brooks resigned abruptly this month, citing “strategic differences.”

Coinbase, the largest U.S. crypto exchange — where Brooks was chief counsel before going into government — in April hired Brett Redfearn, who previously led a division of the S.E.C. He resigned in July because of a shift in strategic focus at the company, Coinbase said.

There’s more where that came from. Jay Clayton, a former S.E.C. chair, yesterday joined the advisory board of the crypto custody provider Fireblocks. Greg Monahan, a former criminal investigator at the Treasury Department, joined Binance this week in an anti-money laundering role. The former C.F.T.C. chair Chris Giancarlo in April joined the board of BlockFi, which is in the cross hairs of securities regulators in several states. And the world’s biggest crypto venture capital fund, at Andreessen Horowitz, is run by a former federal prosecutor, Katie Haun.

The Everything (Department) Store

Amazon is reportedly building retail locations in California and Ohio that would be similar to (but smaller than) department stores. The move could help the e-commerce giant grow its same-day delivery service and showcase its private-label products. What does it mean for the department-store industry?

Amazon chooses building over buying. Analysts and bankers have suggested at various times that Amazon should acquire Target, Nordstrom, Kohl’s and other big-box retailers. But it may be easier to adopt a customized approach rather than take on the full footprints of legacy retailers, and there’s not a dearth of retail real estate to choose from.

What’s more, Walmart and Target both use delivery services like Shipt and Postmates to transport items from their stores to customers who buy online. With its own stores, Amazon could do the same. Plus, with fitting rooms and in-store showcases of its own labels, Amazon could sell even more apparel (it already sells more than any other U.S. retailer).

Amazon’s past expansions didn’t always sink its rivals. Amazon’s acquisition of Whole Foods may have ultimately been good for the industry’s major players: It led Target, Walmart and Kroger to invest millions into e-commerce and delivery operations that came in handy during the pandemic. “The only thing that department stores should be lamenting is that they weren’t just outright acquired by Amazon,” said Joel Bines, who leads retail operations at the consulting firm AlixPartners.

It still puts stress on a struggling industry. While Kohl’s and Macy’s posted blockbuster earnings yesterday, they still appear to be losing share to retail rivals, like direct-to-consumer brands. Amazon’s new project also casts uncertainty over its partnership with Kohl’s, which allows customers to return Amazon purchases at its stores (and maybe buy something in the process). A spokesperson for Kohl’s said the company remained “pleased with this partnership and the new customers it brings.”

SoftBank is looking to sell $2.2 billion of its stake in the delivery company DoorDash in a block trade. (Bloomberg)

China rescued its biggest “bad bank,” indicating Beijing was worried about letting a company so enmeshed in its financial system fail. (NYT)

The Education Department is erasing nearly $6 billion in student loans for borrowers who have significant, permanent disabilities. (NPR)

The European Commission is investigating whether Illumina’s decision to complete its $7.1 billion acquisition of Grail, despite continuing antitrust reviews, breached E.U. rules. (WSJ)

“5 Ways to Reduce Rudeness in the Remote Workplace” (HBR)

A court case offers a rare peek inside a big-money, and acrimonious, Silicon Valley divorce. (NYT)

How The Times and other media outlets, employing diplomatic ties, facing gunfire and eventually a nighttime escape, got their Afghan colleagues out of Kabul. (NYT)