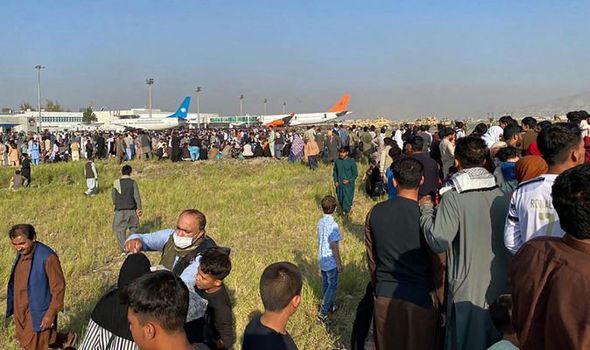 Shots rang out as hordes of terrified Afghans attempted to escape, besieging their capital’s airport. Several fell to their deaths as they tried to cling to the few departing jets in the hope of fleeing the radicals’ lightning coup.

As the nightmarish scenes were beamed around the world, Mr Johnson sent in 200 soldiers from 2nd Battalion, Parachute Regiment (2 Para) to bolster the evacuation to the UK of Britons and key Afghan aides by the 700 members of 16 Air Assault Brigade in place.

But Defence Secretary Ben Wallace, his voice breaking with emotion, warned yesterday: “It’s a really deep part of regret for me, erm…some people won’t get back.

“Some people won’t get back.

And we will have to do our best, and third countries, to process those people.”

Asked why he was taking it so personally, the former Army officer replied: “Because I’m a soldier ‑ because it’s sad, and the West has done what it’s done, and we have to do our very best to get people out and stand by our obligations and 20 years of sacrifice.”

The Prime Minister increased the Army contingent after a third meeting in recent days of Cobra ‑ the Whitehall emergency committee of senior ministers and security officials ‑ discussed the crisis and possible fresh terror threats.

He also pressed for a united Western response to the militants’ violent return to power after two decades, speaking to French President Emmanuel Macron in a flurry of calls from No 10.

A Downing Street spokeswoman said: “The UK team in Afghanistan is working around the clock in incredibly difficult circumstances to help British nationals and as many others as we can get to safety as soon as possible.

“At the same time, we are bringing together the international community to prevent a humanitarian crisis emerging in Afghanistan ‑ it’s in everyone’s interest not to let Afghanistan fail.

“That means providing whatever support we can to the Afghan people who have worked so hard to make the country a better place over the last twenty years.”

The PM is set to announce a fresh refugee resettlement scheme for Afghans in the UK, likely to be focused on rescuing women and girls from the brutal Taliban.

Dominic Raab insisted the UK will lead efforts to “hold the Taliban to account” and to stop Afghanistan returning to be a breeding ground for terrorism.

The Foreign Secretary said 150 evacuated Britons were due to land in the UK early today with 350 more, including Afghan interpreters, expected in the next few days.

Mr Raab had to defend himself yesterday against criticism for being on holiday as the Islamist militants swept back into power.

He claimed the whole world was “taken by surprise” but said he was in constant touch with events throughout his break ‑ thought to be Cyprus ‑ as the crisis worsened. He only cut short his trip as Kabul fell on Sunday.

But his absence and silence provoked dismay from fellow Tories and from Labour ‑ its leader Sir Keir Starmer said Mr Raab ought to have returned sooner and described the Government response a “slow pace”.

Mr Wallace said yesterday he had not known where Mr Raab was as the Taliban seized control but added: “I’ve spoken to him every day.”

Tobias Ellwood MP, chairman of the Commons defence select committee, said: “This is the biggest military challenge in a generation. Everybody should be working their hardest.”

After the latest Cobra summit, Mr Raab said of the takeover: “It is not what we wanted, but we have to deal with the new reality.

“We will hold the Taliban to account, to its commitments to have a new start in Afghanistan. It’s clearly not going to be to the values that the UK, the West, the European Union, the Americans believe in, but we can have a moderating influence.”

He hinted at applying sanctions or withdrawing aid to pressure Taliban leaders into keeping terrorists out of Afghanistan and to protect human rights there.

Mr Johnson’s spokesman said there would be “significant numbers flying out day-by-day” from Afghanistan in the rush to rescue British nationals and local allies.

Around 3,000 Britons were thought to be still there yesterday.

Mr Wallace said the Government aimed to fly back 1,500 people over the next 24 to 36 hours.

“We all see what we’re seeing ‑ time is of the essence. This is not about capacity on planes, it’s about processing speeds, so that’s why I’m trying to fix that.

“Border Force is joining us to make sure that we accelerate the process to get more Afghans out, which is our obligation. The next group…to come out will be 782.”

He said he had seen “chilling reports” of severe human rights “restrictions” and urged world leaders to unite to protect “women and girls, who fear a return to the darkest days”.

His fears were echoed by people in the UK with relatives trapped in Afghanistan.

The last message Aryan Adam, 45, of London, received from his cousin Shahram Nuristani in Kabul was: “The Taliban are here. They are in front of my house.”

The 24-year-old computer sciences student had told his family he feared the extremists would turn up.

Aryan said: “I am very worried about his safety, but I am also worried I won’t be able to get in touch with him any more. None of my other cousins in the country have been active on social media.”