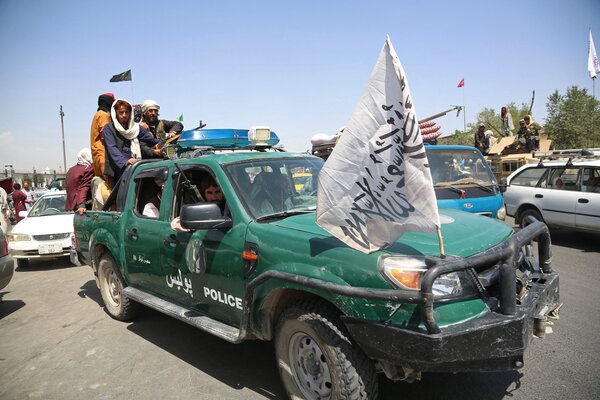 The 20-year American era in Afghanistan came to a swift, shocking close yesterday as the Taliban seized the capital, Kabul. Afghanistan’s president fled the country, and a council of Afghan officials pledged to negotiate with the insurgents.

Amid panic and chaos, observers feared the effect that the takeover would have on people in one of the poorest nations in the world. The sudden turnaround also has significant geopolitical implications, as U.S. influence in the region fades and China, Iran, Russia and others step in.

What’s next for the Afghan economy? Battered by war and propped up by U.S. aid, some 90 percent of Afghanistan’s population lives on less than $2 a day. A June report by the Congressional Research Service said that the outlook for Afghanistan’s economy was uncertain, at best, and that was before the Taliban takeover that followed the withdrawal of U.S. troops.

The country’s mineral reserves are estimated to be worth up to $3 trillion, with a vast trove of gold and industrial metals. Most important to the country’s future, perhaps, are enormous deposits of lithium, a key material for electric batteries. But tapping those resources and selling them to the world could prove difficult for a pariah state. The Taliban’s history of mismanaging the country’s human resources, namely its subjugation of women in all aspects of society, is another cloud over the country’s prospects.

The political fallout will be felt far beyond the region. Refugees fleeing Afghanistan are an immediate worry for China, Pakistan, Iran, Turkey and others. The welcome that China extended to Taliban leaders in a meeting last month was largely seen as protecting Beijing’s investments in the country, which include plans for mining projects. Experts say that China has little appetite for expanding its power in Afghanistan, but the messy U.S. withdrawal “will play into China’s narrative that the West, especially the U.S., is in terminal decline,” wrote Akhil Bery, an analyst at Eurasia Group, in a note to clients. The same goes for Russia, which “will fold the U.S. withdrawal into its arguments about the fecklessness of support from Washington in other areas, such as Ukraine,” he wrote.

What it means for Washington, according to The Times’s David Sanger:

There is a strategy, but not one that Mr. Biden can easily sell amid the images of chaos in Kabul. To his mind, years of refashioning American foreign policy in reaction to the Sept. 11 attacks gave China room to rise, Russia room to disrupt, Iran and North Korea room to focus on their nuclear ambitions. Getting out of Afghanistan is part of a broader effort to refocus on core strategic challenges, and new threats from cyberspace to outer space. But this weekend was evidence that the past is never really in the past.

How the Taliban bought its way to power, one military official at a time.

A week into Taliban rule, one city’s glimpse of what the future may hold.

Follow all the latest updates in The Times’s live briefing.

Japan’s economy is growing again, but the pandemic weighs on the recovery. The Japanese economy grew at a 1.3 percent annualized rate in the second quarter, reversing a decline in the previous quarter. But record-high coronavirus case levels and slow progress in vaccinations has left the country struggling to gain economic momentum.

The Texas Supreme Court says that the state’s governor can ban mask mandates. The preliminary ruling comes as Covid cases spike and I.C.U. beds fill up in parts of the state. Some school districts and local governments had imposed mask requirements in defiance of the statewide order.

Prices of Bitcoin and other cryptocurrencies are surging again. The total value of all cryptocurrencies topped $2 trillion for the first time since May. Small investors appear to be jumping back into the crypto market after a midyear pullback, pushing prices higher.

Dealmaking in the oil industry heats up. BHP, the world’s largest mining company, is considering a sale of its $15 billion oil and gas business, responding to investor pressure. Meanwhile, Bloomberg reports that Aramco is close to buying a 20 percent stake in the oil refining and chemicals unit of India’s Reliance Industries, for up to $25 billion.

Tech giants expand their reach with undersea cable projects. To meet demand for internet services in fast-growing markets, Facebook and Google are investing in cables that will span over 7,000 miles and connect Japan, Taiwan, Guam, the Philippines, Indonesia and Singapore by 2024. Facebook is also part of a consortium building new branches of cables to connect parts of Africa.

Hindenburg Research is having a moment. The five-person firm, founded in 2017, is making its name with searing reports about potential wrongdoing at public companies. Some of those reports have prompted government investigations. Hindenburg’s founder, Nate Anderson, told The Times’s Matthew Goldstein and Kate Kelly that he’s not in the business just to move share prices, but the short-selling firm profits when the stocks it targets fall after it issues its research.

Hindenburg Research blows things up. The firm, which has the backing of about 10 investors (which Anderson declined to identify), is named after the German airship that exploded in 1937. Anderson said his passion is to “find scams,” something he did as a hobby alongside previous jobs in due diligence for hedge funds and family offices. The Hindenburg team, comprised of analysts and former journalists, can take six months or more to produce its reports.

In early August, the S.E.C. subpoenaed the sports betting firm DraftKings after Hindenburg reported in June that it had potentially enabled black-market betting.

Federal authorities began investigating the electric truck maker Lordstown Motors after Hindenburg reported in March that the company was hyping commercial interest. The company’s stock has fallen nearly 70 percent since the research was published.

Last month, the founder of Nikola, an electric vehicle manufacturer, was charged with defrauding investors. A Hindenburg report on the firm, published last September, accused the company of making exaggerated statements about its business. (Anderson said his bet against Nikola was his biggest win to date and remains the firm’s largest short position.)

“Nate’s killing it right now,” said Carson Block, who popularized activist short-selling as the head of the firm Muddy Waters.

The SPAC boom has been a boon. Blank-check companies (like the three mentioned above) have given Hindenburg a lot of fodder. Critics say there are misaligned incentives between sponsors of these takeover vehicles and later investors. The S.E.C. is looking more closely at SPAC deals, which take companies public with less scrutiny than traditional I.P.O.s. “There are just so many outrageous companies,” Anderson said.

“We went from ‘I have no idea what buying and selling stocks is about’ to ‘Oh yeah, I buy worthless meme crypto on the toilet from my phone.’”

— Alexis Ohanian, the Reddit co-founder, on the evolution of young investors’ attitudes toward trading on the “Community x Capital” podcast.

Get that vaccine card ready. New York City’s new vaccine requirements go into effect today. They require customers and staff to show proof of at least one vaccine dose for indoor dining, performances and gyms. An even tougher rule will take effect in San Francisco on Friday.

Robinhood reports earnings. The company’s call with investors after the release of its first earnings report on Wednesday will cater to retail traders. Individual shareholders will be able to submit questions through Say Technologies, a platform that Robinhood recently acquired for $140 million.

The Department of Commerce reports retail sales. Sales rose in June, as coronavirus restrictions eased and consumers opened their wallets. But July sales may have been hampered by the latest surge in coronavirus cases, higher prices and the end of some government benefits.

The lead lawyers on big M.&A. deals have significant clout, generating huge paydays for their firms and steering transactions as key advisers to the merging companies. When Afra Afsharipour, a law professor at the University of California at Davis and a former M.&A. attorney, looked at the characteristics of lead lawyers advising the 700 largest deals over seven years, she was “frankly shocked” to find a “stark” gender gap, she told DealBook. Her findings are collected in a new research study.

Women were the lead legal advisers on the buy side on only about 10 percent of deals. This is out of whack with the number of women who are partners at the top law firms. If women aren’t showing up in the most influential places, like at the helm of deal teams, they are not really leading, Afsharipour argued.

The research was inspired by experience. Afsharipour was often the only woman in the room on deals as an attorney at a top firm more than a decade ago. She didn’t expect the gender disparity to persist. The goal of her research, she said, is to generate conversation about power dynamics that are overlooked in the discussion of diversity on boards, executive teams and elsewhere. When it comes to advisers on M.&A. deals, she said, “the investment banks are probably much worse, but it’s very hard to get the data.”

Can the government be a model? President Biden has named more women as judges in federal courts so far than any of his predecessors. The F.T.C., which reviews deals, is chaired by a woman, Lina Khan. Theoretically, Afsharipour said, these appointments might influence the choice of lead lawyers on deals. Another factor that could drive change is the rise of the environmental, social and governance, or E.S.G., movement among investors, she said. Instituting representation targets on the teams that oversee deals — events of great interest to shareholders — could shift the balance.

Hyatt agreed to buy the KKR-owned tour and resort operator Apple Leisure Group in a $2.7 billion deal, a bet on a rebound in vacation travel. (WSJ)

The French auto parts group Faurecia agreed to take over German rival Hella in a deal valued at around $8 billion. (Bloomberg)

The U.S. food stamp program will get its biggest ever permanent increase, after the Biden administration revised nutrition standards. (NYT)

Why the House minority leader Kevin McCarthy has stayed silent on the infrastructure deal. (Axios)

Ric Elias, the chief executive of Red Ventures, is one of the most powerful — and least known — media moguls in the U.S. (NYT)

The people who quit the corporate life for farming have no regrets. (WSJ)