Use Atlantic bonito for a Northeastern spin on the Hawaiian classic. 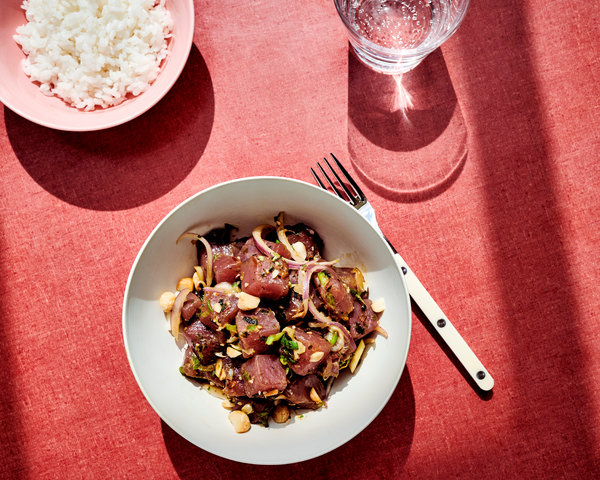 Good morning. The shorebirds that passed me on their way north after the winter are starting to push south along the coast of New England and New York, which means the fall run is starting and not just for birds. We’ll see striped bass heading south pretty soon as well, along with false albacore and bluefish. If we’re lucky — if I’m lucky, out on a boat somewhere where there’s current and bait — there’ll be Atlantic bonito at some point, too, feeding on spearing and, hopefully, one of my badly tied flies.

Bonito’s a great eating fish, mackerel-like in disposition with a taste that recalls tuna. (I don’t kill striped bass because there aren’t enough of them; I think false albacore tastes like wet carpet; I like bluefish only enough to keep a couple a season, for ceviche.) I use it most often for an East Coast take on Hawaiian tuna poke (above), but the recipe’s not just for bonito. It works just as well with yellowfin tuna from the store, or carefully thawed wild Alaskan salmon. So maybe that could be dinner tonight, an offering to the fishing gods, in order that they might send a big wave of fish in my direction, in the direction of all those who like to take dinner from the sea.

No? That’s not for you? All good. See what you make of Melissa Clark’s corn, bacon and Cheddar pie with pickled jalapeños instead, or Lidey Heuck’s broccoli salad with peanuts and tahini-lime dressing.

I like this kuku paku of Tejal Rao’s, a rich Kenyan dish of chicken stewed in spiced coconut sauce, though it might be a bit much for a weeknight; there’s always Dawn Perry’s fast spaghetti Bolognese. (Do make the kuku paku soon, though: It’s amazing.)

Or you could order takeout and spend your evening baking this fantastic blueberry, almond and lemon cake from Yotam Ottolenghi for dessert. Priorities!

There are something like 20,000 more recipes to make instead of the poke waiting for you on New York Times Cooking, at least once you’ve taken out a subscription. (I hope you have. Subscriptions support our work. If you haven’t, will you please subscribe today? Thanks.) And you can find further inspiration on social media: We’re on Instagram and YouTube, and post news and criticism to Twitter. (I’m out there, too: @samsifton.)

Finally, don’t panic if something goes sideways while you’re using our technology. We are standing by to help. Just write to cookingcare@nytimes.com, and someone will help get you sorted.

Now, it’s nothing to do with pickled ginger or Turkish coffee, but — shots fired! — n+1 has an interesting essay by its editors in the summer issue, “Critical Attrition: What’s the Matter With Book Reviews?” See what you make of it.

HBO’s “100 Foot Wave” is absolutely worth watching. (Patrick Kingsley wrote up the back story for The Times in 2018.)

And I’ll end on some housekeeping news, slightly related to the fishing I opened with today. I’m headed off the grid for a couple of weeks, to cook over wood fires and reset my operating system, and won’t be writing this newsletter while I’m gone. Kim Severson will cover for me for the next week, and Melissa Clark for the week after. They’re top-drawer writers, and I think you’ll delight in their tastes.

Me, I’ll be reading one gazillion books, gathering mussels and, I hope, capturing fish, spending a lot of time in the woods and not looking at a single screen. I hope the September newsletters will be filled with tales of adventure. I’ll think of you often and see you when I return. Cook well. Kim will join you on Wednesday.