The letter from nine Democrats, enough to block passage, threatens their party’s two-track plan to pass both a $3.5 trillion social policy budget blueprint and an infrastructure bill. 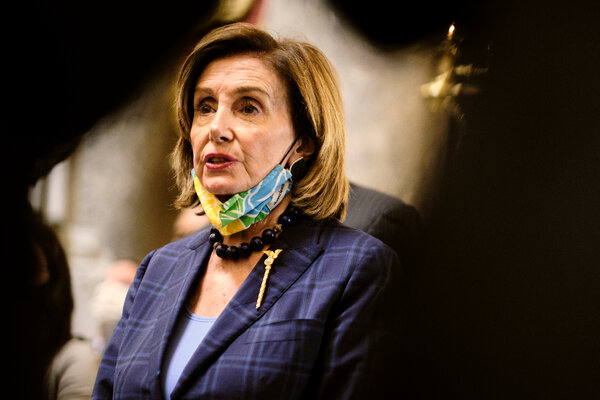 WASHINGTON — Nine moderate House Democrats intend to tell Speaker Nancy Pelosi on Friday that they will not vote for a budget resolution meant to pave the way for the passage of a $3.5 trillion social policy package later this year until a Senate-approved infrastructure bill passes the House and is signed into law.

The pledge, in a letter expected to be released on Friday, is a major rift that threatens the carefully choreographed, two-track effort by congressional Democrats and the Biden administration to enact both a trillion-dollar, bipartisan infrastructure deal and an even more ambitious — but partisan — social policy measure. The nine House members are more than enough to block consideration of the budget blueprint in a House where Democrats hold a three-seat majority.

The Senate passed the infrastructure bill on Tuesday with 69 votes, including 19 Republicans. It then approved, on a party-line vote early Wednesday, a $3.5 trillion budget resolution that, if passed by the House, would allow Democrats in both chambers to assemble the social policy bill this fall without fear of a Republican filibuster in the Senate.

That might not happen until well into the fall, if ever, given the 50-to-50 partisan split in the Senate. And moderate House Democrats say delaying a vote on infrastructure runs the risk of unforeseen events derailing it.

“With the livelihoods of hardworking American families at stake, we simply can’t afford months of unnecessary delays and risk squandering this one-in-a-century, bipartisan infrastructure package,” reads the letter, which was obtained by The New York Times and has Representative Josh Gottheimer, Democrat of New Jersey, as its lead author. “It’s time to get shovels in the ground and people to work.”

Further complicating the situation, more than half of the nearly 100-strong Congressional Progressive Caucus has taken the opposite position, saying they will not vote for the infrastructure bill until they have a social policy measure funding their priorities: climate change, education, health care, family leave, child care and elder care.

With the promised defections from the Progressive Caucus, it would appear that Ms. Pelosi faces a stalemate, lacking the votes to either deliver the infrastructure bill to President Biden’s desk or advance the budget resolution needed to protect the final legislation from Republican obstruction.

Until now, most congressional Democrats had been optimistic that both measures could find enough support.

“This is President Biden’s agenda, this is the Democrats’ agenda, this is what we ran on and we need to deliver,” Representative Ilhan Omar of Minnesota, a leader in the Progressive Caucus, said of the social policy bill. “It is important for us not to miss the mark, and I don’t see a conflict.”

But her moderate colleagues do. “We will not consider voting for a budget resolution until the bipartisan Infrastructure Investment and Jobs Act passes the House and is signed into law,” they wrote.

The draft letter was signed by Mr. Gottheimer and Representatives Filemon Vela of Texas, Henry Cuellar of Texas, Ed Case of Hawaii, Kurt Schrader of Oregon, Carolyn Bourdeaux of Georgia, Jared Golden of Maine, Vicente Gonzalez of Texas and Jim Costa of California.