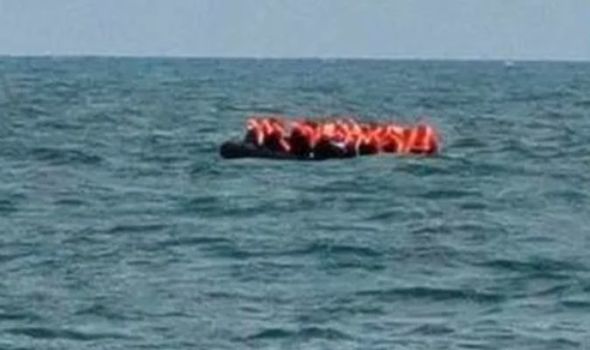 The migrant, believed to be in his 20’s, drowned after a boat sank. The boat, carrying 36 people, got into difficulties around 13 miles off the coast of Dunkirk.

He was pulled unconscious onto a lifeboat by crew from a passing cargo ship at about 10am on Thursday.

After being airlifted to hospital in cardio-respiratory arrest, the migrant died.

Others from the sinking vessel were hoisted aboard the helicopter while more were rescued by nearby fishing boats.

The Dunkirk prosecutor’s office opened an investigation for manslaughter, endangering the lives of others, and people smuggling.

They confirmed that 36 people including families had been aboard the boat when it got into difficulty.

A French border force source in France told the Daily Mail as many as 40 migrants were reported.

They said: “The Elena cargo ship reported as many 40 migrants in the sea.

“They were all on a flimsy boat that was thought to have been provided by people smugglers, before it sank.

“A search and rescue operation was launched, and it included the fishing vessels Nicolas Jérémy and Notre Dame de Boulogne, as well as a fast rescue boat from the Elena.”

Crossings in 2021 have already eclipsed last year’s annual total of 8,417.

At least 155 people were intercepted by French authorities and returned to the continent on Thursday.

August 5 saw a record daily total when 482 migrants crossed in one day.