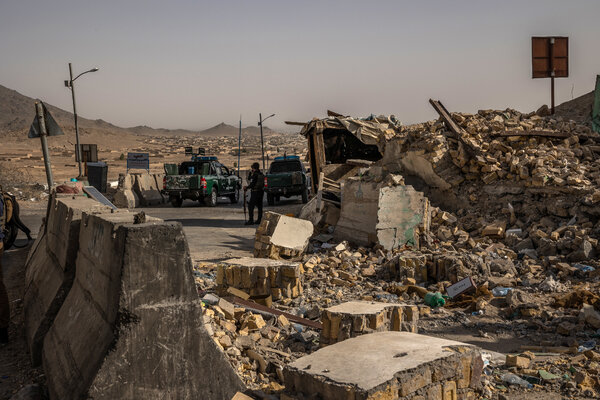 U.S. prepares for evacuation from Afghanistan

The Pentagon is moving thousands of Marines into position for an evacuation of the American Embassy and citizens in Kabul. Officials say the city could fall to the Taliban within 30 days.

The sharply deteriorating situation in Afghanistan — Kandahar and Herat, two of the country’s cultural capitals, were on the verge of falling — has forced the Defense Department to accelerate plans to get Americans out.

Officials say the troops will deploy in the next two days to Hamid Karzai International Airport to help evacuate Americans and embassy personnel. An additional 1,000 Army personnel will be heading to Qatar, the Pentagon said, to help process the visa applications of Afghans who helped the U.S. military during the war.

American negotiators are also trying to get the Taliban to agree that they will not attack the embassy if the group overruns the capital, two American officials said. On Thursday, the embassy sent the latest in a series of alarming alerts, urging Americans to “leave Afghanistan immediately using available commercial flight options.”

Locked down, fed up and ready to be vaccinated

All over Australia, hope is struggling to gain momentum as an outbreak of the hyper-contagious Delta variant has thrown almost half of the population into lockdown.

Nearly 18 months into the pandemic, as other Western nations have vaccinated their way to relative safety or just decided to live with the coronavirus, Australia remains locked in an all-out war whose odds of victory, with a return to zero Covid, have grown ever steeper.

Many Australians feel betrayed by the government’s sputtering vaccine rollout, which they say has squandered the sacrifices made last year. Others are seeking ways to help with grass-roots efforts to accelerate immunity and escape from the restrictions springing up around the country.

Quotable: “We had this incredible window that nobody else in the world had, with nearly a year of minimal Covid transmission, and we were told the whole time that ‘it’s not a race,’” said Maddie Palmer, 39, from Sydney. “It was a race — and they screwed it up.”

Progress: Australia’s drug regulator approved the Moderna vaccine only this week, many months after other countries. Even as supplies of Pfizer and AstraZeneca doses have increased, only 24 percent of adults are fully vaccinated.

Related: Olympic athletes returning home to the state of South Australia must spend 28 days in quarantine.

For all but five weeks between March 2020 and June 2021, care home residents in Toronto were not permitted to leave their buildings for nonmedical reasons, not even a stroll. Over the past couple months, many felt the joy of the outdoors again.

U.S. drug regulators are planning to authorize an additional dose of the Moderna or Pfizer vaccine for people with weakened immune systems.

A season of extreme global weather

Europe’s hottest day ever may have just been recorded in Sicily, where locals were sizzling in 48.8 degrees Celsius. On top of that, running nonstop air-conditioning was causing electrical outages there.

“We are used to torrid summers, but I have no memory of such an unbearable heat,” said Francesco Italia, the mayor of Syracuse.

British Columbia: The province is battling nearly 300 wildfires at once, shrouding parts of the province in opaque clouds of billowing smoke. The Canadian authorities are urging residents to obey evacuation orders during the worst wildfire season since a devastating one in 2018.

U.S.: More than 150 million people are under some form of heat alert from the Pacific Northwest to the Northeast. Power outages only added to the misery in the Midwest.

Turkey: At least nine people have been killed in floods, and at least five children are missing.

More climate news: Many see hydrogen as clean energy’s future. But the way the industry aims to make it is worse for the climate than burning natural gas, a new study said.

Thousands of Alibaba employees wrote a letter urging the company to forbid sexual remarks and games in ice-breaking and other business events, a common problem. It comes as Alibaba tries to change a toxic work culture following an allegation of rape against an employee.

OPEC on Thursday stuck to its prediction of a strong recovery in the oil industry this year and further growth next year, despite concerns about the coronavirus, Reuters reports.

Sudan’s government is getting closer to handing over Omar Hassan al-Bashir to the International Criminal Court, officials said. He is accused of genocide, war crimes and crimes against humanity in Darfur, where some 300,000 were killed.

Zambians are voting in a tight election between President Edgar Lungu and the main opposition rival, Hakainde Hichilema, CNN reports.

The crowds filling Hong Kong in recent weeks aren’t protesters fighting for democracy. They are devotees of the city’s hottest boy band, Mirror. The group of 12 young men took over the city seemingly overnight and infused it with a burst of joy.

How rare are breakthrough infections?

Amid new evidence that vaccinated people with breakthrough infections can carry the coronavirus, U.S. officials urged people in high-transmission areas to wear masks in public indoor spaces, regardless of their vaccination status.

Here’s what’s useful to know about breakthrough infections and the Delta variant:

The vaccines remain highly effective at preventing severe illness and death, producing antibodies in the blood that prevent the coronavirus from taking root in and damaging the lungs and other organs.

Early in the infection, when people are most likely to be contagious, the Delta variant seems to replicate in amounts that are perhaps 1,000 times as much as those seen in people infected with other variants, defeating immune defenses in the nose and throat.

Some experts believe breakthrough infections are likelier after exposure to the Delta variant than to prior forms of the virus. Even when more recent data becomes available, however, it still is likely to show that most hospitalizations and deaths from Covid-19 occur in unvaccinated people.

Don’t fear the anchovy. It makes this eggplant focaccia with ricotta sing.

Watch the director of “Free Guy,” Shawn Levy, narrate a sequence from the film, which stars Ryan Reynolds.

Here are three sample meditations, shared by mindfulness experts, to help you keep your cool.

Here’s today’s Mini Crossword, and a clue: “So it goes” (four letters).

P.S. The Times is introducing a group of newsletters for Times subscribers, including a lineup of new Opinion writers. Sign up.

The latest episode of “The Daily” is on how D.C. politics works now.

Remy Tumin contributed. You can reach Melina and the team at briefing@nytimes.com.