A Senate budget blueprint, which Democrats hope to pass this week, would ease passage of legislation that would mark the biggest expansion of the social safety net in nearly 60 years. 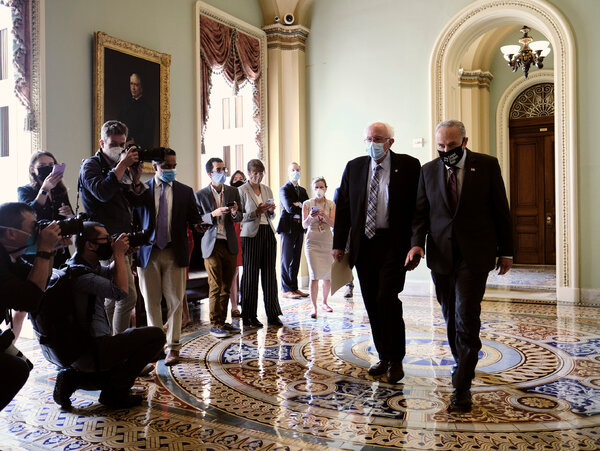 WASHINGTON — Democrats formally began their push on Monday for the most significant expansion of the nation’s social safety net since the Great Society of the 1960s, unveiling a budget blueprint that would spend $3.5 trillion on health care, child and elder care, education and climate change.

The budget resolution, which Senate Democrats hope to pass by the end of this week, would allow the caucus to piece together social policy legislation this fall, paid for by raising taxes on the wealthy, large inheritances and corporations. Should all 50 senators who caucus with Democrats hold together, the measure could pass the Senate without a Republican vote, nullifying the filibuster threat.

Democrats plan to take up the measure as soon as the Senate approves a separate $1 trillion bipartisan infrastructure bill as early as Tuesday morning. Together, the measures could secure virtually all of President Biden’s $4 trillion economic agenda, rebuilding the nation’s roads, bridges, rail lines, water systems and electricity grid while expanding public education, social welfare and health care — and remaking the federal tax code.

But the two-pronged effort will test the president’s ability to keep the razor-thin Democratic majorities in both chambers united as his party’s leaders both work with Republicans and maneuver around them.

“It is big, bold change — the kind of change America thirsts for,” said Senator Chuck Schumer of New York, the majority leader, in a speech on the Senate floor. He added, “The American people don’t expect one piece of legislation to solve all our nation’s ills — no single law can do that — but we have to start in a bold, strong way.”

In a show of unity, Speaker Nancy Pelosi praised what she called “a transformative budget resolution that will achieve the vision of President Biden and congressional Democrats.”

Even with the blueprint yet to pass, rank-and-file lawmakers were jockeying to shape the specifics of the legislation it aims to create. The parameters laid out in the resolution and accompanying memos unlock the ability to draft a legislative package, setting the top line spending of $3.5 trillion and dividing it among the dozen committees assigned to hammer out details. With every Republican opposed, Democrats will need to remain virtually united in both chambers — a difficult prospect, given that moderates have already begun to raise concerns about the price tag.

Democrats hope to expand upon a number of provisions in the $1.9 trillion pandemic relief package they muscled past unanimous Republican opposition in March, the last time they used the fast-track budget reconciliation process to avoid the 60-vote filibuster threshold. That includes continuing a temporary expansion of health insurance subsidies offered through the Affordable Care Act and extending the duration of monthly payments now going to most families with children, a provision estimated to cut child poverty by nearly half.

But it is what they intend to create from scratch that would be transformative. The provisions include expanding Medicare to include dental, hearing and vision benefits, and possibly lowering the eligibility age. New funding would be provided for older or disabled Americans who want long-term care in their homes. Preschool and two years of community college tuition would be made free, effectively expanding the nation’s public education system.

Senator Bernie Sanders, the Vermont independent who is chairman of the Budget Committee, and other senior lawmakers want the United States to have an expansive paid family and medical leave system, like many other developed countries.

Through the legislation, Democrats will also aim to reduce carbon dioxide emissions and prevent wildfires, fund research on the effects of climate change on agriculture, create a Civilian Climate Corps to carry out climate-related public works and make the nation’s coastlines more resilient to the damage caused by rising seas and stronger storms.