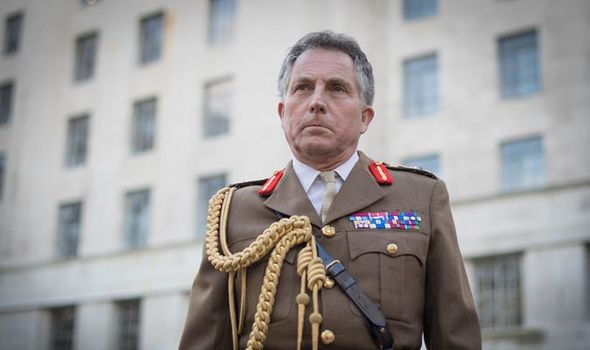 General Carter spoke as Adrian Underwood was named as the British victim. The other man was a Romanian. They were in the tanker’s living quarters when an explosives-packed drone hit the tanker off the coast of Oman last Thursday. Family and friends of Mr Underwood paid tribute as they raised funds to pay for his funeral.

They said he was born in Fiji to a distinguished military family, then moved to the UK and served in the Army until about 20 years ago.

Mark Wilson wrote on the JustGiving web page: “A humble gentleman, funny and loved by so many.

“Our love, thoughts and blessings go to his wife Kiasia, young son Zac and his family and friends.”

Meanwhile, tension escalated after another vessel was boarded in the Gulf by gunmen identified as Iranian nationals.

General Carter told BBC Radio 4’s Today programme: “What we need to be doing, fundamentally, is calling out Iran for its very reckless behaviour. They made a big mistake on the attack against the Mercer Street last week because, of course, that has very much internationalised the state of play in the Gulf.

“Ultimately, we have got to restore deterrence because it is behaviour like that which leads to escalation.

“That could very easily lead to miscalculation and that would be very disastrous for all the peoples of the Gulf and the international community.”

Foreign Secretary Dominic Raab said Britain had written to the president of the UN Security Council to complain about the violence.

Mercer Street ‑ Liberian-flagged and Japanese-owned but operated by Israeli company Zodiac Maritime ‑ was escorted to safety by two US Navy warships.

Although Iran denied involvement, the incident came as its relations with Israel and Western powers were at a low. Boris Johnson warned Iran it would “face consequences” for its warmongering.

In the latest incident, the Panama-flagged tanker Asphalt Princess was boarded off the UAE coast on Tuesday. After reporting a “potential hijack”, the Royal Navy’s UK Maritime Trade Operations later declared the incident “complete”.

Yesterday the US State Department confirmed the gunmen had left the vessel. “We believe these personnel were Iranian, but we’re not in a position to confirm this,” it added.

The drama unfolded in waters leading to the Strait of Hormuz, a channel for about a fifth of the world’s sea-borne oil exports.