Right from the first run of the day Sky Brown looked completely at home. An Olympic debut that was as much hanging out with her skateboarding mates as it was a fight for the precious medals.

Well the 13-year-old grew up in Japan and lives in California – but who cares? She’s plumped for GB because her father Stu, a skater himself, grew up on the south coast of England. 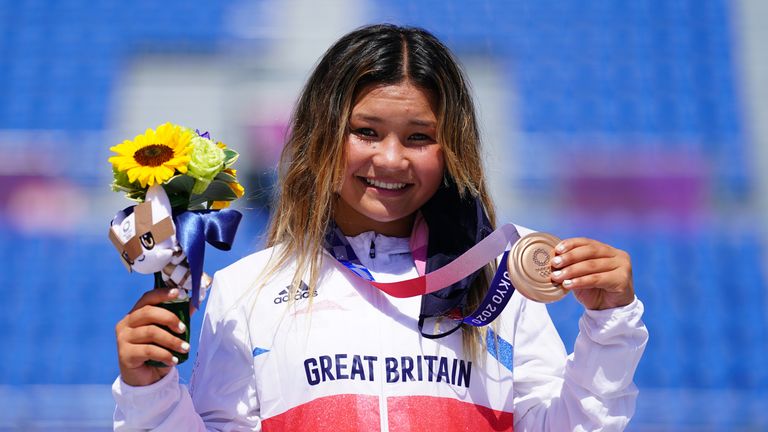 He was in Sky’s corner along with GB Skateboard manager Darren Pearcy from Derby – but Sky just glided through her day at the Olympics like a seasoned pro.

Every boarder who fell was applauded – Sky hugged her competitors after they’d pulled off a big move – delighted for them rather than thinking of her own chances.

Her low centre of gravity and ability to make it look effortless are something else. So too her Japanese friends in the park competition who pulled off some breath-taking tricks.

To underline her British credentials Sky Brown skated one of her final runs to Blur’s Parklife. It was released 14 years before she was even born.

But two falls in her first two runs in the final meant it was all or nothing on her final ride. With a big deep breath she launched into it with a big teenage kick. No fear, just fun.

Her dad was going berserk as she landed her final trick to jump back up the leaderboard to snatch a bronze.

13 years and 28 days old. And the owner of an Olympic medal.

The combined age of the podium in the women’s park skateboarding final was 44.

This is a teenage takeover of the Olympics – exactly as the organisers had hoped. New sports, new audiences and new global stars – school summer holidays don’t get much better.