SINGAPORE – Manufacturing activity in Singapore expanded in July for the 13th month in a row, rising to the highest level since December 2018.

The Singapore Purchasing Managers’ Index (PMI) came in at 51 in July, up 0.2 points from the 50.8 in June, according to data released on Monday (Aug 2). The PMI reading was higher than the 50.8 forecast by economists in a Bloomberg poll.

A PMI reading above 50 indicates expansion; one below points to contraction.

The PMI for the key electronics sector was 50.8, up from 50.6 in the previous month and marking the 12th consecutive month of growth.

Analysts said the PMI gains suggest that both overall manufacturing and electronics maintained the growth momentum, despite initial concerns that the return to phase two (heightened alert) conditions and tighter restrictions in other regional economies due to the Covid-19 Delta variant spread could potentially impact the supply chains.

However, supplier deliveries and order backlogs gave rise to slower expansion rates, and the finished goods index shrank for the fourth consecutive month.

Ms Sophia Poh, SIPMM’s vice-president for industry engagement and development, said the manufacturing economy continued to expand into the second half of this year, despite the heightened alert measures that were imposed to fight the resurgence of Covid-19 cases.

“Anecdotal evidence suggests that the supply shortages faced by electronics manufacturers appear to be easing, although local manufacturers remain concerned about the fluidity of economic restriction due to the evolving variants of Covid-19,” she noted. 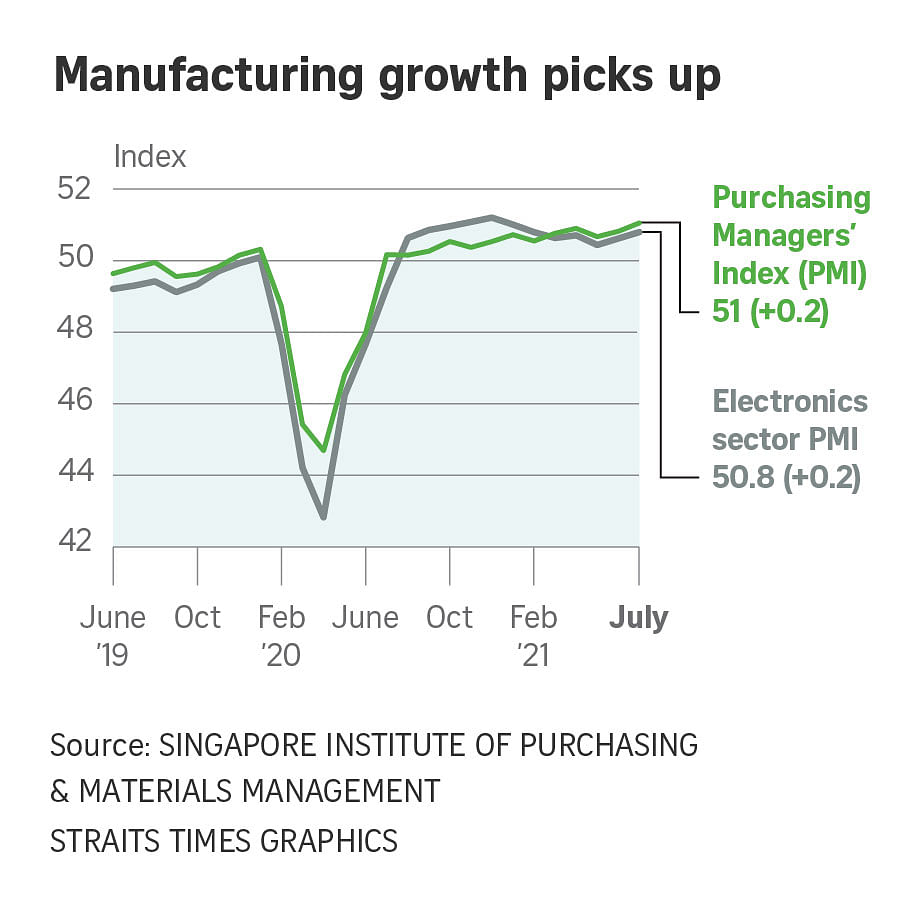 The order backlog index recorded its 13th month of continuous expansion, although the latest reading indicated a slower expansion rate.

The manufacturing sector’s performance in Singapore stands in contrast to slumping activity across most of South-east Asia amid the recent third wave in the outbreak of Covid-19 that has gripped the region.

Data last Saturday showed the pace of China’s economic recovery was also slowing. Its official PMI for July came at 50.4, down from 50.9 in June, said the National Bureau of Statistics.

However, manufacturing in North Asia continued to expand, with PMIs rising for Japan and Taiwan in July. South Korea’s PMI eased, but remained in expansion territory.

Ms Selena Ling, OCBC Bank’s head of treasury research and strategy, said the PMI data suggests that the Delta variant spread continues to exert an uneven toll across the Asian economies, depending on their vaccination progress and respective stages of economic reopening.

“At this juncture, Singapore’s manufacturing and electronics sectors remain fairly resilient and should continue to provide a key pillar of support for near-term growth,” she said.

Ms Ling expects domestic manufacturing to see a moderation to single-digit growth rates in the second half of this year as the low base effect subsides.

She still forecasts a full-year 2021 manufacturing growth of more than 10 per cent.