Confirmed coronavirus infections have jumped in much of the world, and deaths from the disease in Africa have increased by 80 percent over the last four weeks, the director-general of the World Health Organization said on Friday.

The continued spread of the virus and its variants, and its disparate impact on poorer countries with lower rates of vaccination, reflect a global failure, said Dr. Tedros Adhanom Ghebreyesus.

“The pandemic will end when the world chooses to end it,” he said at a news conference. “It is in our hands. We have all the tools we need. We can prevent this disease, we can test for it, and we can treat it.”

Dr. Tedros said that nearly four million new infections had been reported to the W.H.O. in the past week, and the organization expected the world to surpass 200 million total known cases in the next two weeks. However, the totals are underestimates, because countries often undercount cases — sometimes by very large margins. The known global death toll of roughly 4.2 million is assumed to be similarly skewed.

The global spread of the virus is now largely driven by the highly transmissible Delta variant and worsened by inconsistent use of public health measures, increased social mixing and mobility, and the inequitable use of vaccines and other treatments, Dr. Tedros said.

“Hard-won gains are in jeopardy or being lost, and health systems in many countries are being overwhelmed,” he said. 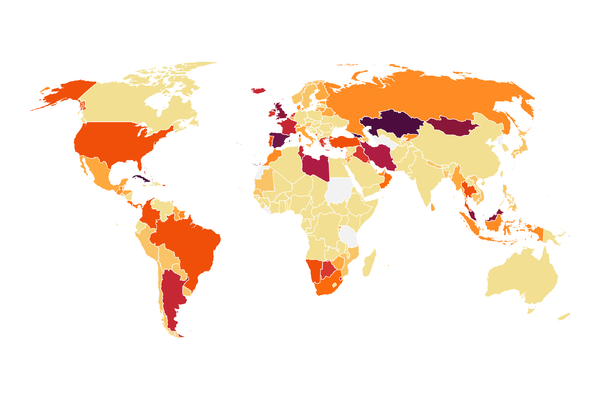 The virus has infected and killed millions of people around the world. See detailed maps and charts for each country.

Things are still not as bad as they were not long ago; more than 500,000 new cases are being recorded daily, compared with more than 800,000 three months ago, according to data from the Center for Systems Science and Engineering at Johns Hopkins University.

Vaccines remain powerfully effective against severe illness and death, but some highly inoculated countries have recently seen sharp rises in caseloads in recent days. A report published by the Centers for Disease Control and Prevention on Friday showed that fully vaccinated people with “breakthrough” infections of the Delta variant, while still thought to be comparatively rare, may spread the virus to others as easily as unvaccinated people.

Vaccination rates range greatly, from more than 80 percent of adults in some countries to less than 1 percent in some of the world’s poorest nations, according to the Our World in Data project at the University of Oxford.

And even with increased vaccine production and more generous donations to Covax, a vaccine sharing initiative, meeting the needs of lower-income countries with large unvaccinated populations would be difficult, Dr. Tedros said.

He pointed to Africa, where cases have skyrocketed in July and where less than 1.5 percent of the continent’s population is fully vaccinated, as a particularly stark example of the problem.

“Many African countries have prepared well to roll out vaccines, but the vaccines have not arrived,” Dr. Tedros said, calling for a donation of $7.7 billion to a partnership for tests, treatments and vaccines, as well as more financing for Covax.