Some see an undue rush by employers to get workplaces back to normal, whether by dropping precautions or imposing new rules. 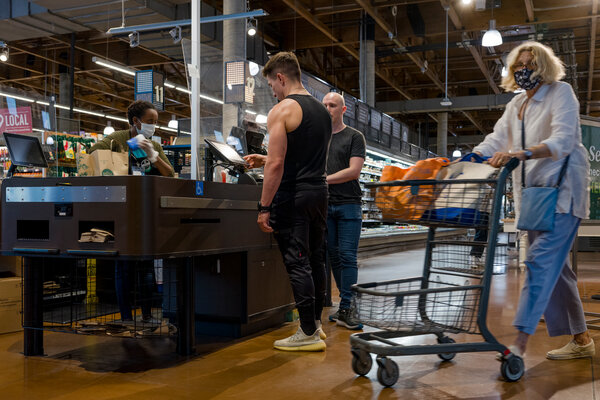 When Kelly Harris, a personal grocery shopper in Steubenville, Ohio, was vaccinated in March against Covid-19, it was a huge relief. “I felt the weight of the world off my shoulders,” she said.

Her sense of relief has turned to dread. After most supermarkets eased masking requirements in May, mask wearing plummeted in her area. She worried about bringing the virus home to her school-age children.

Then, as the Delta variant proliferated in recent weeks, her anxiety levels spiked again. “I try to stay away from everybody and use self-checkout,” she said. “It has me pretty stressed out.”

Judging from the policies of the stores Ms. Harris frequents, many employers appear to regard the recent increase in Covid infections as a mere blip on the long-awaited road to normal.

Some companies have intensified their efforts to return to a pandemic before-times, easing safety protocols while expecting employees to return to previous routines.

But for many workers, the perception is quite different: a sense of rising vulnerability and frustration even for the vaccinated, who find themselves inundated with stories of breakthrough infections and long Covid.

The gulf between employers’ actions and workers’ concerns appears to foreshadow a period of rising tensions between the two, and unions appear to be positioning themselves for it. Some unions are calling on companies to do more to keep members safe, while others are questioning new vaccination requirements. The two positions may seem at odds, but they send a common message: Not so fast.

“I think we’re rushing to return to normal,” said Marc Perrone, the president of the United Food and Commercial Workers, which has over one million members in industries like groceries and meatpacking.

Many workers complain about a mismatch between plans their employers appear to have made before the rise of the variant and the reality of the past few weeks.

For much of the pandemic, Amazon has offered free on-site Covid testing for employees. It incorporated a variety of design features into warehouses to promote social distancing. But a worker at an Amazon warehouse in Oregon, who did not want to be named for fear of retribution, said there had been a gradual reduction in safety features, like the removal of physical barriers to enforce social distancing.