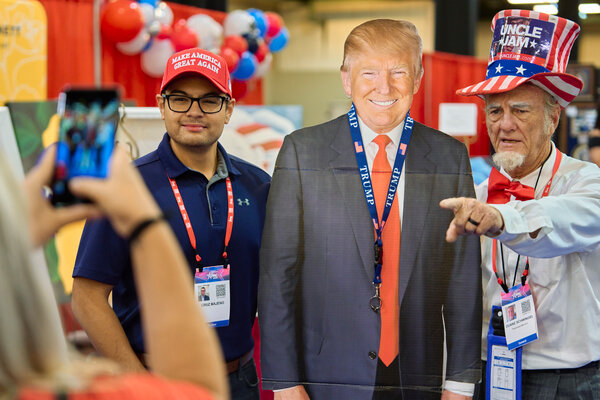 Even in defeat, nothing sells in the Republican Party quite like Donald J. Trump.

The Republican National Committee has been dangling a “Trump Life Membership” to entice small contributors to give online. The party’s Senate campaign arm has been hawking an “Official Trump Majority Membership.” And the committee devoted to winning back the House has been touting Mr. Trump’s nearly every public utterance, talking up a nonexistent Trump social media network and urging donations to “retake Trump’s Majority.”

Six months after Mr. Trump left office, the key to online fund-raising success for the Republican Party in 2021 can largely be summed up in the three words it used to identify the sender of a recent email solicitation: “Trump! Trump! Trump!”

The fund-raising language of party committees is among the most finely tuned messaging in politics, with every word designed to motivate more people to give more money online. And all that testing has yielded Trump-themed gimmicks and giveaways including Trump pint glasses, Trump-signed pictures, Trump event tickets and Trump T-shirts — just from the National Republican Senatorial Committee in the month of July.

“The Republican Party has never had small-dollar fund-raising at this scale before Donald Trump,” said Brad Parscale, who was Mr. Trump’s first campaign manager in 2020 and is still an adviser, “and they probably never will at this scale after Donald Trump.”

But the endless invocations of the former president underscore not only his enduring appeal to online Republican activists and donors — the base of the party’s base and its financial engine — but also the unlikelihood that the G.O.P. apparatus wants to, or even can, meaningfully break from him for the foreseeable future.

The stark reliance on Mr. Trump’s name to spur small donations amounts to a tangible expression of the party’s inescapable dependency on him — one that risks preventing a reckoning over the losses the G.O.P. suffered in the last four years, including Mr. Trump’s own, which he has denied by clinging to false theories of election fraud.

Republican strategists said the party’s messaging and the influx of money reflect Mr. Trump’s continued hold on the hearts and wallets of the grass-roots, despite the party losing the House, the Senate and the White House in his single term.

“The governing class of the Republican Party would just as well see him move on,” said Scott Reed, a Republican strategist and former top political adviser for the U.S. Chamber of Commerce. “It’s been ‘enough is enough.’ But he still keeps a firm grip on the grass-roots.”