The Pride march that snaked its way through Budapest was about much more than just celebrating the city’s LGBT+ community. This was a raucous blend of party and protest.

The party was obvious – a blend of lots of people, plenty of noise, a sense of collective purpose and the beating sunshine.

As for the protest – that was pointed at Hungary’s adoption of new rules to restrict what the government refers to as “homosexual propaganda”. Prime Minister Viktor Orban says he is protecting traditional family values by curtailing the portrayal of LGBT+ issues in schools and on broadcast channels.

Plenty of others says it’s just a cynical exercise in appealing to the base instincts of rural voters, ahead of next year’s general election.

So on today’s march, we had posters of Mr Orban, portrayed in rainbow colours, and banners complaining and protesting about the new laws. People told us they felt threatened and stigmatised. Just about everyone we spoke to reckoned this was, indeed, a political move, with more than one person assuring me that the prime minister has gay friends, but has embraced the allure of homophobia in the face of indifferent poll results.

Among the crowd were politicians from other countries. The British ambassador to Hungary, Paul Fox, was here, handing out flags emblazoned with a rainbow version of half a union flag, and the words “Love is Great”. As a PR stunt, it worked – we saw hundreds of these flags during the day.

Then there were politicians from around Europe, including the Irish MEP Maria Walsh. As we spoke before the march, she told me that she sympathised with all those who wondered why the EU wasn’t doing more to rein in Mr Orban.

“Enough has to be enough,” she said. “We can’t keep talking about the buzzword of solidarity without actually implementing it in the rooms and around the tables that matter.

“Orban is only just starting, you know, he’s built a foundation that he can stand on and then we’re going to see more and more rollbacks of rights and… then how can I even wear a European mask or flag and say everybody’s equal cause that’s not the case.” The march snaked through the city. The police presence was significant, but also unobtrusive. They weren’t exactly joining in with the party, but nor were they menacing anyone. To be honest, the police mostly looked bored.

The one job they did have was to separate the marchers from a couple of counter-protests.

There weren’t many people at either of them, but they were loud and belligerent. When I spoke to some of these protestors, the bile dripped from their words, with fanciful tales of nursery-age children being driven into homosexuality, or forced into sex changes.

This, according to one of the protestors, Edda Budahazy, was the sort of thing that happened in the United Kingdom “and we don’t want to be like you”. “We want to stay Hungarians. All our history is full of fighting for our freedom so we don’t want this gender ideology.

“If somebody is gay I don’t do anything but I am against the person who is doing gay propaganda, against the children, in the school, in the kindergarten. That is what we are against, not the gay persons. I feel sorry for them.”

This is, on the one hand, absurd. But on the other, it mirrors a feeling among many Hungarians, especially those outside the big cities, that the country’s fabric is under threat by the forces of change. And that is what Mr Orban feeds on.

So it could be migrants, or perhaps western liberal values, or maybe Brussels bureaucrats or, as now, the concept of LGBT+ activists brainwashing children. 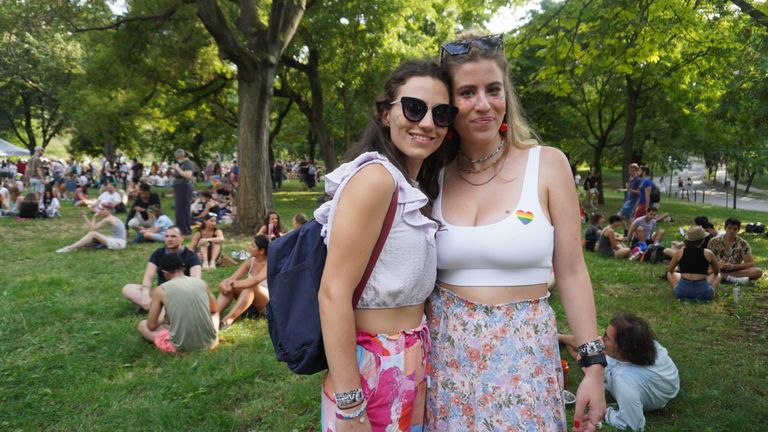 However ridiculous this may sound, it has resonance among, particularly rural, voters. And Mr Orban, who’s been in power for more than a decade, has a general election next year.

As the march got to its end, we chatted to some of those who’d been walking for hours. There was that familiar blend of fun from the day and fear for the future. For some, that fear feels very pressing.

Judit Mezö-Krizsa had marched with her partner Lilla. She thinks they will now be forced to leave the country.