Good morning. We’re covering catastrophic floods in China, a shift by governments to a new pandemic normal and protests over water shortages in Iran. 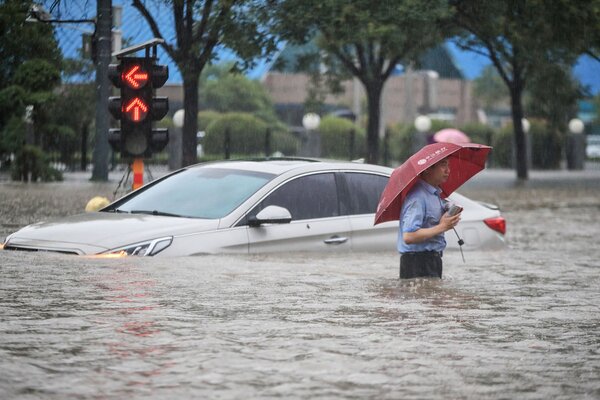 At least 25 people died in and around Zhengzhou, a city of five million and the capital of Henan Province, when the heaviest rainfall on record caused severe flooding. Twelve of the victims were stuck on a subway train when waters rose.

The terror began on Tuesday evening when floodwaters breached a retaining wall near an entrance to the subway’s Line 5, which makes a loop around the city center. The water poured into the system between two stations, flooding the train.

Trapped passengers posted videos as the disaster unfolded. Other photographs and videos — some later apparently removed by censors — showed several lifeless bodies on a subway platform.

Passengers called relatives or emergency services while they waited to be rescued from chest-deep floodwaters. After two hours, survivors said, it became difficult to breathe in the remaining congested air.

The response: China’s leader, Xi Jinping, ordered the authorities to give top priority to people’s safety and called the flooding “very severe.” Although flooding is common in China, researchers have attributed the extreme weather sweeping the planet to the consequences of climate change.

In other climate news: Wildfire smoke from the Western U.S. and Canada spread to the East Coast and triggered health alerts from Toronto to Philadelphia. A state of emergency was declared in the Canadian province of British Columbia after wildfire evacuation orders.

How countries are learning to live with Covid

Governments in Asia, Europe and the Americas are encouraging people to return to their daily rhythms and accept that rolling coronavirus lockdowns and restrictions are a necessary part of recovery. Increasingly, the message is: We have to learn to live with the virus.

England has lifted nearly all virus restrictions. Germany is allowing vaccinated people to travel without quarantines. Mask mandates are gone in Italy. And shopping malls remain open in Singapore.

Those governments, and others, are encouraging citizens to shift their pandemic perspective and focus on preventing severe illness and death instead of infections, which are harder to avoid. But some scientists warn that the moves may be premature, especially because they do not fully understand the effect of variants or “long Covid.”

Quotable: “You need to tell people: We’re going to get a lot of cases,” said Dale Fisher, who heads the committee to prevent and control infections at Singapore’s Health Ministry. “And that’s part of the plan — we have to let it go.”

Half of Australia is under lockdown as the Delta variant drives outbreaks across three states.

A South African plant will handle the final stages of manufacturing for Pfizer shots that will go exclusively to countries on the continent.

High-profile political prisoners in Myanmar are dying of Covid, unable to access oxygen or other lifesaving care.

Life expectancy dropped 2.9 years for Black Americans and three years for Hispanic Americans in 2020, a more staggering drop than for white people.

For the past week, demonstrators have taken to the streets of Khuzestan Province in southwest Iran, shouting “I am thirsty!” A prolonged drought worsened by climate change and government mismanagement has turned the water crisis into an incubator for unrest.

Several people have died in clashes with security forces, just a few weeks before an ultraconservative new president is set to take office. The government has known for months that Iran was facing the driest summer in 50 years, but failed to prepare.

Context: The unrest in Khuzestan, home to an often-marginalized Arab population, only added to the swirl of challenges. A fifth wave of the coronavirus is sweeping the country, and U.S. sanctions are straining the economy. Talks about rescuing the nuclear agreement have also stalled.

Jeff Bezos drew criticism for saying that Amazon employees and customers “paid for all of this” during a news conference after his spaceflight.

Kodak, the camera company, deleted an Instagram post featuring images of Xinjiang after a backlash from supporters of Beijing.

The three major drug distributors in the U.S. and Johnson & Johnson have reached a $26 billion deal with states that would release them from all legal liability in the opioid epidemic.

Poland accidentally brought six too many swimmers to the Tokyo Games and had to send them home.

The U.K. has agreed to pay France £54 million to help block migrants from crossing the English Channel and arriving by boat.

Liverpool, England, lost its status as a UNESCO World Heritage City over concerns about redevelopment, most notably on its waterfront.

Mormon women are speaking out against the itchy, constrictive, church-designed sacred undergarments they’re supposed to wear. “We really want buttery soft fabric,” one church member wrote in an Instagram post that drew thousands of comments from women venting their frustration.

In top-tier institutions like the New York Philharmonic, Asians now account for a third of that orchestra, though they represent about 6 percent of the U.S. population. Asian artists often win top prizes at competitions.