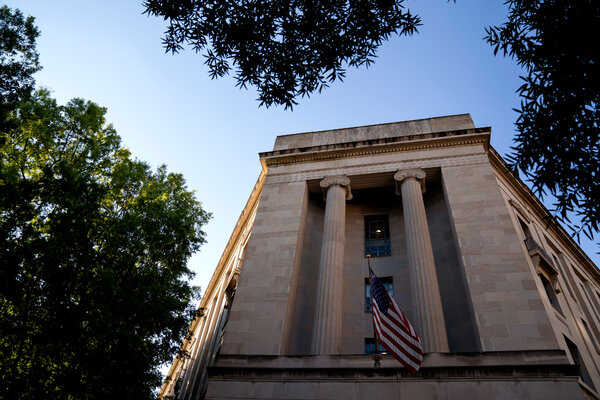 After six months and much speculation, the White House has finally nominated someone to lead the antitrust division at the Justice Department: Jonathan Kanter, the former Paul Weiss lawyer and longtime critic of Big Tech.

If confirmed by the Senate, which could take awhile, Kanter will lead the division that filed a lawsuit last year against Google, accusing it of illegally protecting its monopoly over search advertising. The division has also been asking questions about Apple’s business practices.

Kanter built an unusual practice out of criticizing tech giants from inside corporate law firms. He worked for Microsoft as a lawyer at Fried Frank and Cadwalader, helping the tech giant build its case against Google more than a decade ago. Kanter later worked for Yelp doing the same. His other clients in cases challenging Big Tech have included the likes of News Corp and Spotify.

Kanter’s nomination will please progressives who want to rein in corporate power. A slogan some adopted after President Biden took office was “Wu & Khan & Kanter.” (Here it is on a mug.) This refers to a trio of Big Tech critics that includes Tim Wu, now part of Biden’s National Economic Council, and Lina Khan, who now heads the F.T.C. Kanter’s nomination also comes shortly after House lawmakers advanced a suite of antitrust bills taking aim at Big Tech and Biden issued an executive order charging federal agencies with more closely scrutinizing corporate consolidation and monopoly practices.

Kanter’s past work could raise ethical questions. Both Facebook and Amazon have asked Khan to recuse herself from matters involving the companies at the F.T.C., even though her background is as a legal scholar and not a paid representative for their rivals. (Disqualifying a commissioner isn’t easy.) Asked whether Kanter would recuse himself from cases involving Google and Apple, a White House official simply said the administration was confident that it could move forward with his nomination given his expertise and record. Google did not respond to a request for comment.

He has support on both sides of the aisle, reflecting bipartisan opposition to Big Tech these days. Amy Klobuchar, a Minnesota Democrat who leads the Senate’s antitrust subcommittee, called Kanter “an excellent choice.” Senator Mike Lee, a conservative Republican from Utah, said he was “encouraged” by Kanter’s track record.

But Wall Street may not be as happy with the pick, given a rumored name for the Justice Department post, Sullivan & Cromwell’s Renata Hesse, was seen as friendlier to big companies. M.&.A is at record levels, but scrutiny in Washington on acquisitions has expanded beyond tech to other industries like agriculture, health care and insurance. If Kanter is confirmed as the Justice Department’s top trustbuster, will dealmakers curb their enthusiasm?

Markets are set to maintain their recovery. Stock futures are up strongly this morning after yesterday’s big jump. That suggests investors are taking solace in vaccinations keeping the economic recovery going, treating Monday’s rout as a buying opportunity.

Tom Barrack, the financier and Trump ally, is arrested. Prosecutors charged the founder of Colony Capital, who led Donald Trump’s inaugural committee, with publicly promoting the United Arab Emirates’ agenda without registering as a lobbyist. Over three years, Barrack raised $1.5 billion in funds from the U.A.E. and Saudi Arabia for Colony.

Netflix’s hold on the streaming crown is slipping. The company lost nearly a half-million subscribers in the U.S. and Canada in the second quarter, though it added 1.5 million customers overall. Data shows that customers are steadily shifting their attention to rivals like Disney+.

Apple and Morgan Stanley diverge on return-to-office plans. The iPhone maker delayed its official return by at least a month, to October, citing a surge in coronavirus infections. But Morgan Stanley’s chief legal officer urged the firm’s outside law firms to bring their workers back to the office. Meanwhile, Hollywood studios can require mandatory vaccinations on set through September, following a deal with unions.

Wall Street wins an N.B.A. championship. The Milwaukee Bucks defeated the Phoenix Suns in Game 6 of the league’s finals, earning their first championship in 50 years. It’s a major victory for the finals M.V.P. Giannis Antetokounmpo — and for the financiers who own the Bucks, including Jamie Dinan of York Capital, Wes Edens of Fortress and Marc Lasry of Avenue Capital.

Ken Frazier stepped down as Merck’s C.E.O. last month, but he has kept busy since. He remains executive chairman of the pharmaceutical giant and is co-leading OneTen, a start-up that aims to create one million jobs for Black Americans. Now, DealBook is first to report, he’s adding another role: venture capitalist.

Frazier will join General Catalyst as chairman of health assurance initiatives, a new position in which he will focus on health care start-ups. It’s an area of focus for General Catalyst’s managing partner, Hemant Taneja, who recently spearheaded a $600 million fund.

“I’ve encountered a lot of people who are working at what I would call an intersection between tech and life sciences. These people are, in my experience, very fluent in digital technology and data science, analytics, machine learning,” Frazier told DealBook. But what is needed is “people who understand empathy,” he said. “We need people who have both data-led approaches as well as more human-centric approaches.”

He was brought onboard by his friend Ken Chenault, who joined General Catalyst in 2018 as chairman after retiring as American Express’s C.E.O. The two first met at Harvard Law School and became among the few Black chief executives of Fortune 500 companies. The two Kens most recently pushed hundreds of corporate leaders to publicly oppose states’ efforts to limit voting rights.

“As you can imagine, he had myriad choices about what he would do,” Chenault said of the other Ken. “Clearly our personal relationship was important, but that wouldn’t have been enough if Ken didn’t believe in the vision and what we’re trying to do in health care.”

“I also want to thank every Amazon employee and every Amazon customer because you guys paid for all of this.”

— Jeff Bezos, at a news conference upon his return to Earth. (More on that below.) Also after his spaceflight, Bezos announced he was giving $100 million each to the CNN contributor Van Jones and the chef José Andrés to direct toward charity as part of a “surprise” philanthropic initiative.

Is space tourism good for the environment?

Jeff Bezos, upon descending from his trip to the edge of space yesterday, reconfirmed his commitment to fighting climate change. “We have to build a road to space so that our kids and their kids can build a future,” he told MSNBC.

Bezos says space tourism is a first step toward moving people (and polluting industry) into space to avert an energy crisis. His fellow billionaire space entrepreneurs, like Richard Branson and Elon Musk, have also said their companies are an answer to climate change: Musk wants to colonize Mars in case we ruin Earth.

Critics argue that space tourism will add to emissions rather than save the planet. But the industry is still low on the list of polluters.

The global space industry uses less than a tenth of a percent of propellant as the aviation industry uses fuel. What’s more, the amount used for rockets like those that carried Branson and Bezos to space is a tiny portion of that, said Martin Ross, a scientist at the Aerospace Corporation, a federally funded research and development center. In a recent study, Ross found that space tourism companies could launch as many as 10,000 suborbital flights per year before the effect of their emissions on the atmosphere would begin to approach that of orbital rockets.

It is not yet understood exactly how rocket launches affect the planet. The space industry is the only direct source of emissions into the stratosphere above 20 kilometers. Particles that rockets leave behind can absorb sunlight or reflect sunlight, potentially changing the climate of the stratosphere or affecting the ozone layer.

“We know it’s not a problem now,” Ross said, “but we can’t predict how much of that up and down you can do before it does become a problem.”

Aside from whether space tourism will contribute to climate change, there’s skepticism over space companies’ claims that they can help answer climate change. Some say Bezos’s vision for colonizing space isn’t feasible, and Bezos himself calls it a “long-range problem.” Billionaires going to space should first consider climate disasters on Earth, critics argue.

It’s not quite fair to say that Bezos has ignored these problems. Although Amazon is a major polluter, it says it aims to go carbon neutral by 2040 and Bezos has pledged $10 billion of his personal wealth to address climate change. But it’s possible to spot a difference in methods: Are moonshots only for space?

What do you think? What role can space tourism play in climate change? Let us know: dealbook@nytimes.com. Include your name and location and we may feature your response in a future newsletter.

The cryptocurrency exchange FTX raised $900 million from investors like SoftBank and Sequoia Capital at an $18 billion valuation. (WSJ)

The mining giant BHP is reportedly weighing the sale of its oil and gas businesses at a valuation of at least $15 billion. (Bloomberg)

Nasdaq plans to spin out its platform for trading in shares of privately held start-ups, in a partnership with Citigroup, Goldman Sachs and Morgan Stanley. (FT)

Chinese suppliers to Apple and Nike are shunning workers from the Xinjiang region to avoid U.S. bans on products made with forced labor. (WSJ)

Americans own nearly twice as much medical debt as previously thought, and the liabilities are largest where Medicaid wasn’t expanded. (NYT)

Washington has dropped its opposition to a natural-gas pipeline that runs from Russia to Germany. (WSJ)

Dr. Anthony Fauci clashed with Senator Rand Paul over American funding of Wuhan’s virus research facility: “Senator Paul, you do not know what you’re talking about, quite frankly, and I want to say that officially.” (WaPo)

“An ‘Airbnb for Pools’ Is Making a Splash This Summer” (WSJ)

It isn’t just deals that are flourishing: The business of making “deal toys” that commemorate transactions is, too. (Insider)