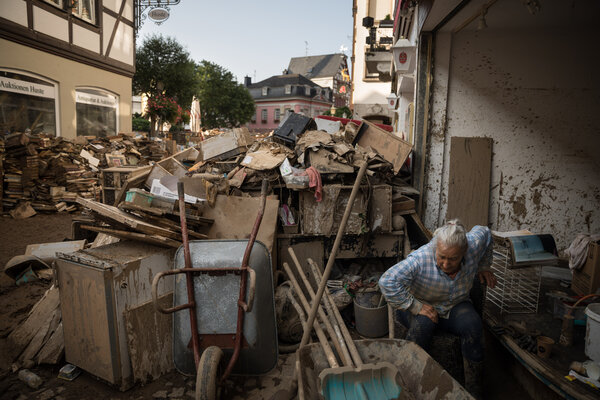 The death toll from days of devastating flooding in western Europe has climbed to at least 196 across the region, even as European authorities revised down the number of people missing. More than 700 people have now been identified as safe after days of uncertainty, the police in Cologne, Germany, said late on Sunday.

As the floodwaters have retreated, officials in the region have begun asking questions about how the brutal storm, accurately predicted by forecasters earlier in the week, could have led to such a significant loss of life. Flooding experts noted a likely disconnect between the forecasts and alert systems that communicated the level of risk to residents.

Extreme weather: The western U.S. has been hit by its fourth major heat wave since early June, bringing dangerously hot temperatures and worsening droughts and wildfires. Britain issued its first-ever extreme heat warning, which will be in place until Thursday.

Climate policy: Democrats proposed a tax on imports from China and other countries that are not significantly reducing the planet-warming pollution that they produce. Experts said a border carbon tax would almost certainly provoke America’s trading partners.

Haitian officials announced a new prime minister in an attempt to resolve a caustic leadership struggle. With foreign powers weighing in, the interim prime minister, Claude Joseph, is stepping down in favor of Ariel Henry, a neurosurgeon who had been appointed to the position but was yet to be sworn in when President Jovenel Moïse was assassinated.

The president of Haiti’s Senate said that pressure from American diplomats was a major factor in the reshuffling. “Haiti has become a baseball being thrown between foreign diplomats,” he said. It was not immediately clear what had caused international actors to switch and throw their weight behind Henry.

Analysis: Washington dismissed warnings that democracy was unraveling under Moïse, leaving a gaping leadership void after his assassination.

Coronavirus at the Tokyo Olympics

An outbreak of coronavirus cases threatens to overshadow the Tokyo Olympics’ opening ceremony on Friday. Of the roughly 20,000 athletes and officials who have poured into Japan, more than two dozen have tested positive for the virus, including three cases within the Olympic Village.

Tokyo is under a state of emergency, and daily case counts in Japan have exceeded 1,000 for several days for the first time since mid-May. Toyota, a prime corporate sponsor, pulled its Olympic-themed television advertisements, a symbolic vote of no confidence. In addition to the virus challenges, the Summer Olympics are expected to be the hottest on record.

The Games begin at 9 a.m. Tokyo time on July 21 (8 p.m. Eastern tomorrow/3 a.m. B.S.T. on Wednesday), when Australia and Japan play the first game of a softball triple-header. Follow along with our live updates here.

Related: Why are the beds in the athletes’ village made of cardboard?

Cats and dogs can be infected by the coronavirus — but our feline friends are more susceptible, a new study suggests.

Stock markets in Europe, Asia and the U.S. fell over concerns about the Delta variant’s impact on growth.

More than 100,000 people took to the streets over the weekend to protest France’s tough new vaccine strategy.

The U.S. formally accused the Chinese government of hacking Microsoft, joining other NATO members to condemn Beijing for cyberattacks.

A Times investigation into a train crash in Taiwan that killed 49 people found that failures at the government agency that runs the train system contributed to the disaster.

Reports of Jewish groups praying at the Temple Mount, a volatile Jerusalem holy site, have raised questions about a potentially explosive rightward policy shift in Israel.

Migrants from Iraq and Africa crossing the border between Belarus and Lithuania have found themselves caught in a geopolitical battle between the E.U. and Belarus’s strongman president.

Many British businesses have approached England’s reopening cautiously. On a sweltering day in central London, there was no discernible increase in foot traffic as voluntary work-from-home efforts remained in place.

A Swiss mega-gallery on the Spanish islet of Isla del Rey increasingly peddles not just art but experiences to its wealthy clientele.

Like Canada, the U.S. forced Indigenous children into boarding schools where many died. Survivors are trying to reclaim their identity.

The publisher Penguin Random House announced that it had acquired a memoir by Prince Harry, which it described in a news release as “intimate and heartfelt.”

Smartphones are steering novice hikers onto trails they can’t handle.

At age 82, Wally Funk is finally going to space, in a rocket built by Jeff Bezos’ company Blue Origin. Her journey, which began in the 1950s and saw her excluded from previous trips to space because of her gender, highlights difficult questions about whom space is for.

Shortly after the 2020 presidential election, five women teamed up to assign Vice President-elect Kamala Harris a name sign — the equivalent of a person’s name in American Sign Language.

The women — Ebony Gooden, Kavita Pipalia, Smita Kothari, Candace Jones and Arlene Ngalle-Paryani — are members of the “capital D Deaf community,” a term some deaf people use to indicate they embrace deafness as a cultural identity and communicate primarily through A.S.L.

Through social media, people submitted suggestions and put the entries to a vote. The result: a name sign that draws inspiration from the sign for “lotus flower” — the translation of “Kamala” in Sanskrit — and the number three, highlighting Harris’s trifecta as the first Black, Indian and female vice president.

“Name signs given to political leaders are usually created by white men, but for this one we wanted to not only represent women, but diversity — Black women, Indian women,” Kothari said. Read more about it, and see videos of the signs.

These spicy Sichuan noodles are loaded with complex flavors and textures but are easy to put together on a weeknight.

“The prosthetics are a marvel,” writes our reviewer of Netflix’s new anonymous dating show “Sexy Beasts.”

Here are the looks from the Cannes Film Festival. (Heels are back.)

The latest episode of “The Daily” is on Covid booster shots.

Sanam Yar wrote today’s Arts and Ideas. You can reach Natasha and the team at briefing@nytimes.com.