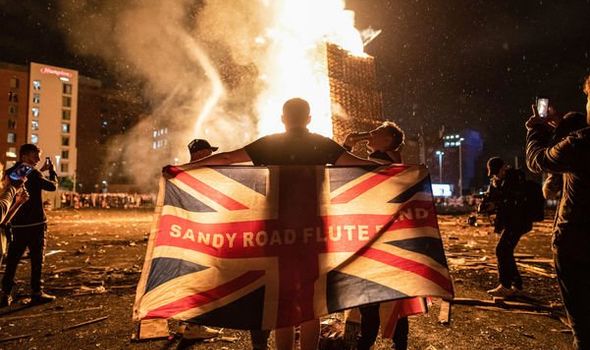 A poll found more than half blame the EU’s meddling in commerce between Great Britain and the province for threatening stability.

Rule changes give Eurocrats the right to check goods moving across the Irish Sea into Northern Ireland, which, in effect, remains part of the EU single market to prevent trade checkpoints along the Irish border.

The survey comes as loyalists lit more than 160 bonfires to usher in the Protestant parade season.

While the majority pass without incident, some cause community tension and have attracted criticism for burning effigies of politicians and election posters. The cross-party

Centre for Brexit Policy commissioned the poll by Savanta ComRes, which CBP leader and ex- Northern Ireland Secretary Owen Paterson said should be a wake-up call for the Government.

A total 57 percent of Leave voters among more than 2,000 UK adults quizzed believe the protocol is being used as a back-door way to hamper Brexit. And 40 percent of Remainers agree the restrictions prevented a proper exit, while only 13 percent disagree.

Just over half, 53 percent, say it is important Northern Ireland remains in the UK, with 12 percent against. Brussels agreed a three-month sausage war ceasefire last month, hours before a meat sales ban.

The rules, which would have blocked chilled meat from Great Britain, were delayed for three months. The UK says the EU is enforcing regulations too strictly and has urged the bloc to be “pragmatic”. DUP MP and CBP director Sammy Wilson said: “For all the smoke and mirrors, the public knows that the hidden agenda here is to use the unique circumstances of Northern Ireland as a way of wrecking Brexit.

“Foreign powers should not be allowed to interfere with trade within a sovereign state.”

The Eleventh Night bonfires precede the Twelfth of July parades, which took place at 100 locations across Northern Ireland on Monday.

Earlier, two Stormont ministers failed in a legal bid to force police to help remove a pyre at Tiger’s Bay, north Belfast, which is near the nationalist New Lodge area.

Officers said that they feared it would cause disorder.