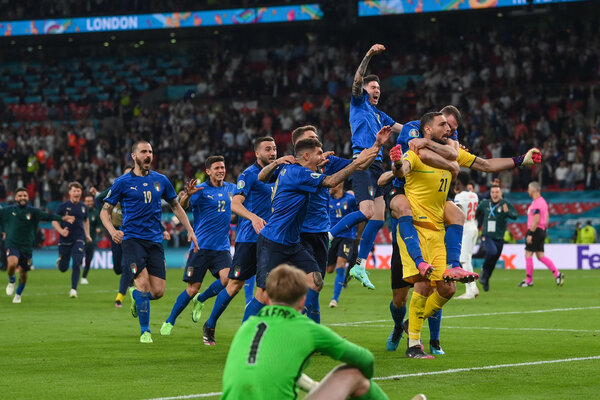 Italy beat England in a penalty shootout to win the European soccer championship yesterday, breaking English hearts and dashing the country’s hopes of winning its first major title since the 1966 World Cup.

The shootout was a dramatic conclusion to a gripping day at Wembley Stadium in London, and to a monthlong tournament that overcame a one-year pandemic delay, dozens of positive coronavirus tests and innumerable public health concerns on its way to the final.

View from Italy: After the national team beat England, the country celebrated a victory that seemed to symbolize renewal after adversity.

England made whole: The stunning rise of England’s soccer team has helped define a new vision of Englishness, with a focus on a more tolerant, multiracial and multiethnic society. The loss left fans silent and stunned in the stands.

The fight over energy’s future

In the U.S., an intense policy struggle is being waged over the country’s energy system between those who want more power lines to move electricity created by distant wind turbines and solar farms and those who call for more locally generated power.

Adding more power lines, the choice favored by President Biden and large electrical utility companies, would strengthen the control that the utility industry and Wall Street have over the grid, which is sorely in need of improvement.

Decisions about how energy is delivered could shape the course of climate change and determine how the U.S. copes with wildfires, heat waves and other extreme weather events linked to global warming.

Record-breaking heat: The Western U.S. broiled under another “heat dome” over the weekend: Death Valley, Calif., reached 130 degrees Fahrenheit (about 54 degrees Celsius), one of the highest temperatures ever recorded on Earth.

Effects: Heat waves have worsened a widespread drought, set the stage for what is expected to be another catastrophic fire season and killed off marine wildlife en masse on the Pacific Coast.

Other climate news: In Turkey, the sapphire-blue Sea of Marmara is brimming with pollution and suffocating under a slimy secretion caused, in part, by warming waters.

More than 3,000 Indian children who lost their parents during a calamitous wave of coronavirus infections this past spring face the risk of neglect and exploitation when attention inevitably fades.

Though Indian states have announced compensation of about $7 to $68 per month for each orphan, along with promises of food and free education, advocates worry about long-term protections. The traumatized children often find it difficult to obtain death certificates to qualify for government benefits.

Heartbreaking calls: Kahkashan Saifi, 9, lost both of her parents and then her home when the landlord locked out her and her siblings over unpaid rent. Nearly every day, Kahkashan picks up the phone and dials her mother, talking to her as if she were on the other end. “Mother, when will you come?” she says.

U.S. Treasury Secretary Janet Yellen expressed concern that coronavirus variants could derail the global economic recovery and called for an urgent push to deploy vaccines more rapidly around the world.

Iranians, desperate for Covid vaccines, are crossing into Armenia to get shots.

The C.D.C. urged American schools to fully reopen in the fall, even if they cannot take all of the precautionary steps that the agency recommends to curb the spread of the virus.

Haiti on the Brink

A team of American government investigators is ready to begin assisting the investigation into the assassination of President Jovenel Moïse last week, a senior Pentagon official said. Above, a man prays at the entrance of a church during Sunday Mass in Port-au-Prince.

At least 20 Colombians have been implicated by Haitian officials in the plot to assassinate the president. But their role in the killing, if any, is murky.

Political chaos has gripped Haiti. On Sunday, the country hurtled toward a constitutional crisis, as two competing prime ministers jockeyed for control.

Haiti has asked the U.S. and the U.N. to send troops and security assistance. But intellectuals and members of Haitian civil society argue that international support has often added to the country’s instability.

The billionaire Richard Branson went to the edge of space in a Virgin Galactic rocket, a breakthrough in interstellar tourism.

The G20 backed a global tax proposal that would crack down on tax havens and impose new levies on large, profitable multinational companies.

Hundreds of Cubans took to the streets to protest food and medicine shortages in a remarkable eruption of discontent not seen in nearly 30 years.

At a former dairy farm in Germany, all animals are equal, and no animal is more equal than any other. Retired cows and pigs coexist with the farm’s workers, part of a national shift away from eating meat and animal products.

During a pivotal week in the civil war in the Ethiopian region of Tigray, Declan Walsh, the chief Africa correspondent for The Times, went behind the front lines with the photographer Finbarr O’Reilly. There, they witnessed a cascade of victories by Tigrayan fighters that culminated in their retaking the region’s capital.

“We saw how a scrappy Tigrayan force overcame one of the largest armies in Africa through force of arms, but also by exploiting a wave of popular rage,” Declan writes.

While the coronavirus pandemic may be a time many want to forget, others are doing the opposite — getting tattoos to commemorate it. Some are opting for permanent reminders of lost loved ones, their own survival or lessons learned from the turmoil.

Samantha Barry, the editor of Glamour magazine, got a tattoo of the New York City skyline, a homage to the walks that kept her going. “We will talk about 2020 when we are old and gray, and now I have something on my body that symbolizes where I was,” she said.

Rachael Sunshine, a 44-year-old with a degenerative nerve disease, survived Covid-19 twice. She got a tattoo of a heart surrounded by coronavirus spike proteins, which is the logo of a group that connects survivors. “The tears were just coming down my eyes,” she said.

Katie Tompkins, who works for a medical lab, took a different approach. For her first tattoo, she got a little toilet paper roll.

“I wanted to have something to look at and go, ‘Oh my God, remember when all that crazy stuff happened?’” she said. “It’s my way of bringing light to a not great situation.”

This crispy tofu with cashews and blistered snap peas comes together in just half an hour.

“The White Lotus,” a one-percenter satire, is a sun-soaked tale of money, death and customer service.

That’s it for today’s briefing. Wishing you an excellent Monday — Natasha

The latest episode of “The Daily” is about the assassination of Haiti’s president.

Amelia Nierenberg wrote today’s Arts and Ideas. You can reach Natasha and the team at briefing@nytimes.com.