In the paperwork Didi filed before its initial public offering, the Chinese ride-hailing platform gave no shortage of warnings to investors that regulators in Beijing were hovering.

After China’s internet regulator, antitrust watchdog and tax authority summoned it and more than 30 other internet companies for a meeting in April, Didi said, the company examined its operations and “uncovered a number of areas which could be deemed problematic from the compliance perspective.” Even though government officials conducted on-site inspections, Didi said it could not guarantee investors that it would avoid penalties.

Those warnings barely hinted at the sudden clampdown that has cut short Didi’s coming-out party.

Shares of Didi lost a fifth of their value on Tuesday and fell again in early trading in New York on Wednesday. The company was trading 16 percent below its I.P.O. price from a week earlier.

The plunge was born of a rapid-fire series of actions taken by government agencies in Beijing, where top policymakers declared this week that they would aim to strengthen oversight of Chinese companies that, like Didi, list their shares on exchanges overseas.

Mere days after Didi’s I.P.O., China’s internet regulator told the company to stop signing up new users so it could conduct a cybersecurity review. Next the agency ordered Didi’s app removed from mobile stores because of concerns about data collection.

Then, on Wednesday, China’s antitrust authority slapped Didi and other tech companies including Alibaba with modest fines for failing to report merger deals to the agency in advance. (Didi did flag the possibility of such penalties in its I.P.O. disclosures.)

A Didi representative declined to comment. The company has said it did not know about regulators’ plans for the cybersecurity review or the ban on new downloads before it went public.

But Jason Hsu, chief investment officer at Rayliant, an asset manager that invests in Chinese securities, said Chinese regulators typically have discussions with companies about regulatory actions they are about to take.

“So one would assume that ahead of its I.P.O., Didi was aware of a possible formal investigation forthcoming,” Mr. Hsu said.

The company’s listing was completed at a breakneck pace. It filed preliminary paperwork on June 10. Two weeks later, it revealed an anticipated price range for its stock. Its shares were trading less than a week after that.

Failing to disclose prior awareness of market-moving regulatory decisions could make Didi and the banks that arranged the initial public offering — Goldman Sachs, Morgan Stanley and JPMorgan Chase — vulnerable to investor lawsuits and regulatory problems in the United States.

Representatives for the banks and the U.S. Securities and Exchange Commission declined to comment. Didi is represented in the United States by Skadden, Arps, Slate, Meagher & Flom, which did not immediately comment. 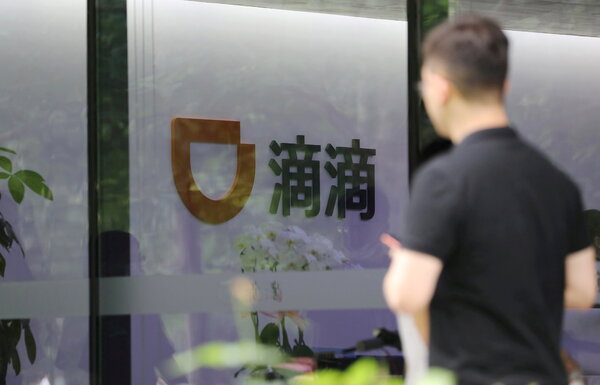 But data protection and network security are hardly the only fronts on which Chinese officials might be circling Didi. That means the company, its investors and its underwriters could be in for even more unpleasant surprises.

China’s antitrust authority has been scrutinizing the country’s internet industry with never-before-seen vigor in recent months, accusing corporate giants of abusing their size and market power. In April, it imposed a $2.8 billion fine on Alibaba, whose shares are also listed in the United States, for blocking merchants on its bazaars from selling on other online platforms.

At a more local level, Didi has tussled for years with city authorities in China over operating permits and licenses. The company acknowledged in its I.P.O. filings that many of its drivers in China had not secured the license they need to provide ride-hailing services. Beijing and Shanghai, for instance, require that ride-hailing drivers be local residents, but both cities make it very hard for people to register as local residents in order to control population growth.

And a “large” number of cars on its platform might not have the necessary vehicle permit, Didi said in its I.P.O. documents. Cars used for online ride-hailing services in China must meet certain safety criteria to obtain such permits.

Top Chinese policymakers’ announcement this week that they would seek to tighten regulation of overseas-listed Chinese companies makes it a very real possibility that still other Chinese regulators could decide to take action against Didi. The government’s policy document published on Tuesday said that stronger capital-market regulation should be combined with broader efforts to uphold national security and social stability, an indication of how seriously Beijing now treats such issues.

Different Chinese government agencies generally need to consult with one another, even if they do not necessarily coordinate outright on investigations of major companies such as Didi, said Wendy Ng, who studies Chinese competition law at the University of Melbourne. Sometimes, other agencies might push back if they believe the case is weak or their regulatory turf is being encroached upon.

“But in this environment, where it seems like the floodgates, at least at the moment, have opened to give regulators the green light to rein in the digital platforms, then it seems that it is much less likely that other regulators might resist,” Professor Ng said.

For instance, if China’s internet regulator determines that Didi failed to protect users’ data, then that might feed into an investigation by the antitrust watchdog into whether the company did so to squeeze out its rivals, Professor Ng said.

“This is precisely what antitrust regulators are talking about all around the world: whether or not a breach of privacy could also be evidence of an abuse of dominance,” she said.

The United States is trying to tighten its own rules for foreign companies that list on American exchanges. Washington lawmakers who have called for U.S. regulators to have more power over Chinese companies are pointing to the mess at Didi to support their cause.

“Even if the stock rebounds, American investors still have no insight into the company’s financial strength because the Chinese Communist Party blocks U.S. regulators from reviewing the books,” Senator Marco Rubio, Republican of Florida, said in a statement to The New York Times. “That puts the investments of American retirees at risk and funnels desperately needed U.S. dollars into Beijing.”

Mr. Rubio and Senator Bob Casey, Democrat of Pennsylvania, introduced a bill in May that would prevent Chinese companies from going public in the United States if they don’t subject themselves to the full authority of the American entity that oversees auditors.