The Taliban in Afghanistan have been making big strides in grabbing territory over the past few days and weeks particularly targeting the north – a long way away from their traditional homelands in the south.

We spent a night in Taliban-controlled territory bordering the capital, in Wardak Province west of Kabul, and got an insight into how the group has changed and how it’s still the same.

The group is continually emphasising how it has progressed and how it’s not the same regime toppled by the US-led Coalition invasion in 2001. 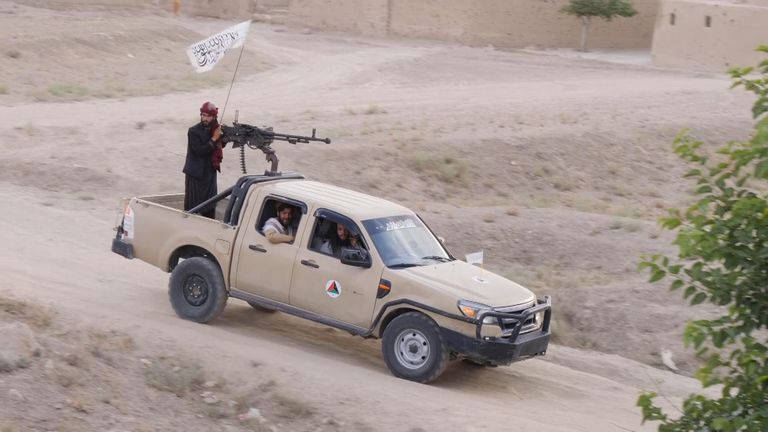 Then, thousands of international troops poured into Afghanistan to oust the Taliban government for harbouring the Al-Qaeda leader Osama Bin Laden in the wake of the 9/11 attacks.

Nearly 20 years on, the foreign troops have left, apart from a rump guarding the US embassy and the international airport.

Right now though, the Taliban are winning the propaganda war – releasing multiple videos on social media boasting of their territorial successes and allowing foreign journalists like Sky News to access their territory in order to show their gains.

In contrast, the Afghan government has seemed timid and silent with few representatives willing to appear on media outlets to explain their position or offer reassurances to the public.

We were the first foreign journalists the Taliban invited onto the Sultan Khil military base in Wardak Province, days after they captured it. It’s a huge sprawling army facility in one of the most strategic positions.

It not only represented a significant military success for the Taliban after two days of fighting with Afghan soldiers, it also provided them with a treasure trove of armoury and ammunitions. The commander accompanying us said his fighters had taken 70 sniper rifles, 900 guns, 30 Humvees, 20 army pickups and 15 articulated military trucks. There were satellite phones, grenades, mortars, bullets, and empty containers for sniper rifles and a range of ammunitions. Many had labels on the front saying “Property of USA Government”.

The weapons the US had supplied to the Afghan Army to use against the Taliban have now been captured by the very group they were meant to be turned on.

We were taken to a mosque where some of the cache of weapons they’ve recently seized were laid out for us to see.

There were AK47s stacked high and boxes of bullets lined up in rows nearby – alongside printers, computers and other office equipment they’d seized from the base.

They are confident, emboldened by their recent battlefield successes, and revelling in the knowledge they’ve overturned a military hiding behind security walls in bases stuffed full of sophisticated weapons.

Many of the bases appear to have seen Afghan soldiers just surrendering or participating in half-hearted battles to retain their positions. But once given the option of surrendering or leaving without suffering injuries or death, they have wholeheartedly grasped the chance to go home. 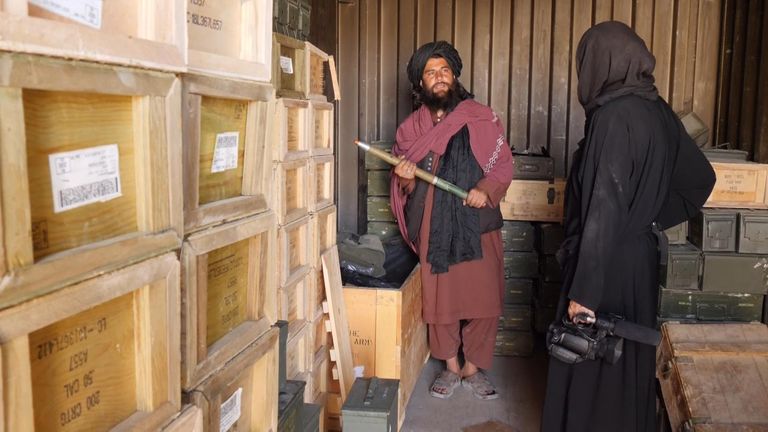 Commander after commander told us how they welcomed and encouraged female education, although often it was vague about what this meant and to what age this was extended to.

They spoke about female equality but insisted this would have to involve wearing the hijab. Yet I saw no women out in public on the streets or going to the street stalls. At meals times, as a female, I was segregated and taken to a different room, away from the men. The women of the household did the cooking, cleaning and child-rearing and appeared to be without options of developing a career or even being literate. Indeed when I asked to speak to the women of the house, I was told they were “illiterate” and it wouldn’t be useful to talk to them.

Crowds of men told us how they welcomed the Taliban control as it brought safety and security whereas before they were often caught between fighting.

The Ashraf Ghani government is deeply unpopular, especially in the areas where the Taliban has been able to take a hold – perhaps because of that.

But to many civilians, the Taliban represents a return to being able to live without the constant fear of shooting, death and injury. And this may well be the reason why US intelligence reports are predicting a collapse of the central government within months, possibly weeks.

Tags: are gains i Making Taliban The