President Biden could legally require members of the military to get vaccinated, but so far he has declined to do so. 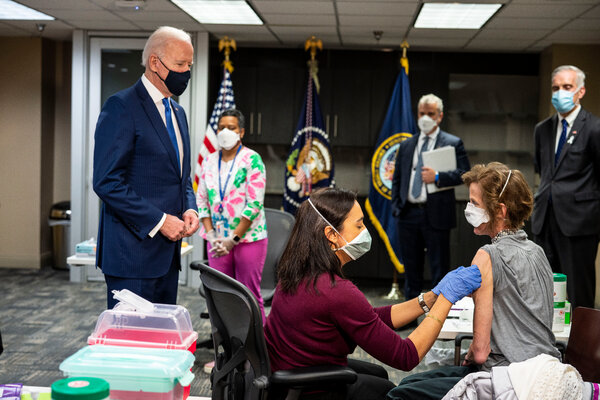 WASHINGTON — Denis McDonough, the secretary of veterans affairs, said this week that he was considering a move to compel workers at V.A. hospitals to get vaccinated, fearing that centers with low vaccination rates were risking the health of veterans seeking care.

The military is also struggling to fully vaccinate more troops across all service branches. While the Army and Navy are outpacing the civilian population in vaccine uptake, the Air Force and the Marine Corps have faced greater challenges. About 68 percent of active-duty members have had at least one dose, officials said.

President Biden could legally require members of the military to get vaccinated, but so far he has declined to exercise that power even as the highly contagious Delta variant has become an increasing threat to unvaccinated Americans.

“The Delta variant poses a threat to that return to normal,” Dr. Terry Adirim, the acting assistant secretary of defense for health affairs, said this week. “We are particularly concerned with the impact of the Delta variant on our unvaccinated or partially vaccinated population and its potential spread at installations that are located in parts of the country with low vaccination rates.”

The Department of Veterans Affairs struck a deal this week with the employee union to offer workers four hours of paid administrative leave if they prove that they have been fully vaccinated. “It would be negligent to not be considering the full range of opportunities that we have to ensure that we’re taking every step possible to protect our vets,” Mr. McDonough said.