Speaker Nancy Pelosi on Thursday named Representative Liz Cheney of Wyoming to a newly created special committee to investigate the Jan. 6 riot at the Capitol, choosing a Republican who has blamed former President Donald J. Trump for fomenting the assault to help conduct an inquiry that the rest of her party has fought to block at every turn.

The appointment drew an angry response from the top House Republican, who suggested that Ms. Cheney — already ousted from party leadership for her insistence on calling out Mr. Trump’s election lies — could face fresh retribution for agreeing to help Democrats investigate the deadliest attack on Congress in centuries.

The reaction was the latest bid by Republican leaders to turn public attention away from the assault on the Capitol and punish those who insist on scrutinizing the riot. It came as a fuller picture is emerging of how violent extremists, taking their cues from Mr. Trump, infiltrated the seat of American democracy just as Congress was meeting to validate President Biden’s election.

A New York Times visual investigation published this week revealed in vivid detail how members of extremist groups incited others to riot and assault police officers, and underscored how the former president’s words resonated with the mob in real time as it staged the attack.

Representative Kevin McCarthy, Republican of California and the minority leader, responded angrily to Ms. Cheney’s decision to accept the post, calling it “shocking” and implying that she could lose her seat on the Armed Services Committee as payback.

“I don’t know in history where someone would get their committee assignments from the speaker and then expect to get them from the conference as well,” Mr. McCarthy said.

Should he follow through with the threat, it would be a striking move for Mr. McCarthy, who has declined to penalize Republicans who have made anti-Semitic comments, called for the imprisoning of their Democratic colleagues or spread false conspiracy theories about the origins of the assault on the Capitol.

It would also be the second time in two months that Mr. McCarthy punished Ms. Cheney for insisting that Congress should scrutinize the attack and Mr. Trump’s role in spreading the falsehoods about voting fraud that inspired it. In May, Mr. McCarthy led the charge to oust Ms. Cheney from her post as the No. 3 House Republican, saying her criticisms of Mr. Trump and efforts to sound the alarm about the riot were undermining party unity and hurting its chances of reclaiming the House in the 2022 elections.

“My oath, my duty is to the Constitution, and that will always be above politics,” Ms. Cheney told reporters in the Capitol on Thursday, appearing alongside the seven Democrats Ms. Pelosi had selected for the 13-member panel.

According to its rules, Mr. McCarthy has the right to offer five recommendations for Republican members, but he declined on Thursday to say whether he would do so.

The select committee was established at Ms. Pelosi’s behest after Senate Republicans blocked the formation of a bipartisan commission to scrutinize the riot. It will investigate what its organizing resolution calls “the facts, circumstances and causes relating to the Jan. 6, 2021, domestic terrorist attack.” The committee is also charged with reporting its findings, conclusions and recommendations for preventing such attacks in the future.

The panel’s creation comes as some far-right House Republicans have stepped up their efforts to deny or distort the riot, including by spreading misinformation about it. They have sought to portray it as a mostly peaceful event and voted against honoring police officers who responded. One House Republican accused a U.S. Capitol Police officer of “lying in wait” to carry out an “execution” of a rioter. Another compared the events of that day to a “normal tourist visit” to the Capitol. Still others have amplified the baseless theory that the F.B.I. was secretly behind the siege. 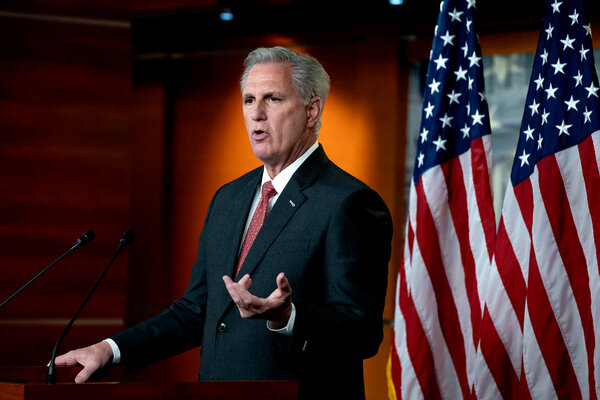 On Thursday, Mr. Trump amplified those narratives, releasing a one-sentence statement questioning the killing of Ashli Babbitt. Ms. Babbitt was shot as she tried to break into an area off the House floor where several lawmakers were taking cover, and her death has become a rallying cry of the far right.

In taking the unusual step of giving one of her seats on the panel to a member of the opposing party, Ms. Pelosi was making a tactical move that appeared intended to drive a wedge among Republicans while putting a veneer of bipartisanship on an investigation that most of them have already dismissed as politically motivated and one-sided.

The selection also all but ensures that Ms. Cheney, a prominent conservative from a storied Republican family, remains a high-profile voice countering her party’s attempts to downplay and deny the horrors of the attack, risking her political career to do so.

For weeks, Republican leaders have tried to silence and ostracize Ms. Cheney, but she has remained undeterred. On Thursday, said she was “honored” to serve on the committee.

“Those who are responsible for the attack need to be held accountable, and this select committee will fulfill that responsibility in a professional, expeditious and nonpartisan manner,” she said.

Ms. Pelosi called Ms. Cheney personally on Thursday morning to offer her the post, and Ms. Cheney accepted on the spot, according to aides to both lawmakers. The two had not spoken previously about the prospect, the aides said, although Ms. Pelosi had let it be known this week that she was weighing naming a Republican to her side of the panel.

Ms. Cheney’s selection was announced during Ms. Pelosi’s Thursday morning news conference, when she laid out a list of powerful lawmakers who would carry out the inquiry. The panel is to be led by Representative Bennie Thompson, a Mississippi Democrat who is the chairman of the Homeland Security Committee. It includes two other committee leaders, Representatives Adam B. Schiff of the Intelligence Committee and Zoe Lofgren of the Administration Committee, both of California.

Also included are Representative Jamie Raskin, Democrat of Maryland and the lead prosecutor in the impeachment case against Mr. Trump for “incitement of insurrection,” and Representative Pete Aguilar of California, a member of the party leadership. Ms. Pelosi also chose two moderate Democrats, Representative Elaine Luria of Virginia and Representative Stephanie Murphy of Florida, the leader of the centrist Blue Dog Coalition.

Understand the Removal of Liz Cheney

House Republicans voted on May 12 to oust Representative Liz Cheney of Wyoming from their leadership ranks for her refusal to stay quiet about President Donald J. Trump’s election lies.